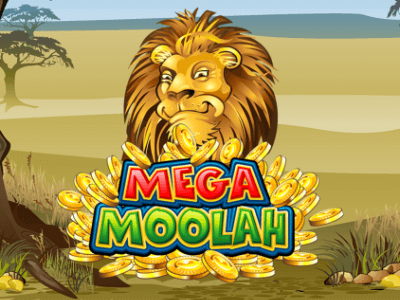 The Mega Moolah Jackpot is quite literally etched into the history books for all the right reasons. This absolutely jaw-dropping four-tiered networked progressive jackpot has paid out hundreds of millions of pounds over the years and has twice held the Guinness World Record® for the highest jackpot payout in online slot history. If you want to add your name to the long list of players that have been made a millionaire from this series then get spinning!

The Mega Moolah series isn’t just iconic for its networked progressive jackpot prizes, this series has a whole ton of brilliant bonuses and lucrative mechanics that players enjoy such as a multitude of free spins, multiplier trails and massive maximum wins. If you’re looking for the very best slots in the Mega Moolah series then look no further as we've taken the liberty of playing each and every title and placing the very best for you to enjoy right here!

The very first Mega Moolah game was released by veteran iGaming developers Microgaming back in 2005 and has grown from strength to strength over the years as more Mega Moolah branded games incorporating the life-changing jackpots have been added to the fold.

In 2013 Mega Moolah gained international recognition for making the world’s first millionaire as a result of playing online slots on their mobile device.

It wasn’t until 2020 that a brand new selection of new Mega Moolah slots were released online. Mega Moolah Atlantean Treasures and Mega Moolah Absolootly Mad were the first two to come out, this was followed by Fortunium Gold and Juicy Joker.

All of these Mega Moolah slots share the same networked progressive jackpot that offers players the opportunity to win one of four different jackpots, the Mini, Minor, Major and Mega.

The networked progressive jackpot is known to pay out top prizes of between £6,000,000 and £8,000,00 every month or so with the Mini, Minor and Major jackpots paying out significantly more often, with the first two paying out a number of times a day.

How do you trigger the Mega Moolah Jackpot?

The interesting thing about the Mega Moolah Jackpot, is that it can be won at any time without the need to hit any specific combination of symbols such as five scatters or wilds in most games.

The only thing players must keep in mind when playing is the higher your bet, the great chance you have of winning a progressive jackpot. It makes for very exciting, unpredictable gameplay, which is no doubt what makes this series so popular with players around the world.

What happens when the Mega Moolah Jackpot bonus is triggered?

All of the segments are in different colours, even if they represent the same jackpot, this tricks users into thinking there are less smaller paying segments on the wheel then there actually is.

Once the wheel is spun it will eventually stop on one of the four jackpots and the player will be paid accordingly.

If you like to diversify your gameplay by playing a wide variety of different slots like the Mega Moolah series, all whilst being in with a chance of winning a life-changing jackpot, then you'll definitely want to play Daily/Network Jackpots.

Not all jackpots are networked and spread across multiple online slots like the Mega Moolah Jackpot. There are plenty of games that are known for offering players the chance to win huge sums of money by playing that slot, and that slot only!