Jungle Mega Moolah is a 5-reel, 25 payline progressive jackpot slot that's part of the iconic Mega Moolah series. This slot, that's somewhat of a nod to the very first game in this popular series, offers players up to 30 free spins with all wins trebled and of course the chance to win one of four life-changing Mega Moolah networked progressive jackpots.

Jungle Mega Moolah offers players the opportunity to take a step back in time to when online slot games were a little bit simpler, all of the bonus features in this game are reminiscent of the original Mega Moolah slot. First we have multiplier wilds that see players see all of their wins doubled when the Jungle Mega Moolah symbol shows up anywhere on a winning payline.

Secondly, we have the game's classic free spins bonus feature, when players land 3, 4 or 5 monkey scatter symbols anywhere on the reels they'll automatically trigger 15 free spins. At the end of the free spin bonus round players will see their overall prize tripled.

It's also completely plausible that players can re-trigger the free spins bonus, seeing them collect up to 30 free spins in one go.

Finally, we have the iconic Mega Moolah Progressive Jackpot, this can be triggered on any given spin of the game, however, players have a greater chance of triggering it when they play with a higher stake. 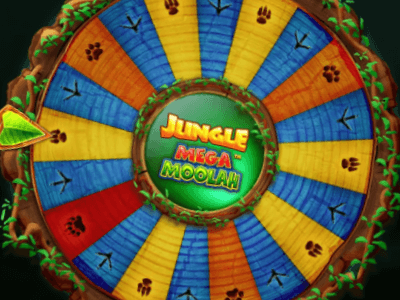 If players land the Jungle Mega Moolah symbol anywhere on a winning payline then their winnings will automatically be doubled. 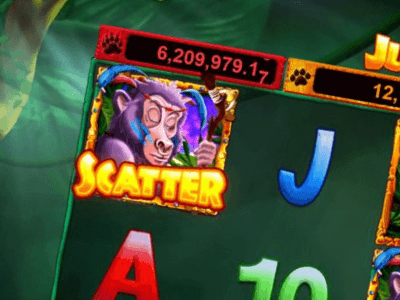 If players land 3, 4 or 5 monkey scatter symbols anywhere on the reels they'll trigger 15 free spins with a 3x payout at the end of the bonus. 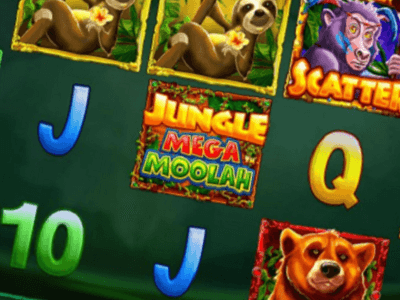 Players can trigger the Mega Moolah Jackpot on any given spin of the reels. Players must spin a wheel-of-fortune to determine which jackpot they receive.

Fans of the very first Mega Moolah game will be delighted to see that Microgaming have gone back to their original roots with a game focused on the animal kingdom, which is actually pretty strange considering most titles in the Mega Moolah series vary widely with regards to their slot theme.

This 5-reel, 25 payline slot works very similarly to the original slot, offering players two main features, 2x multiplier wilds that sees payouts doubled, and a free spins feature that can see players get up to 30 free spins with a 3x multiplier at the end.

Naturally, this slot comes bundled with the iconic Mega Moolah Progressive Jackpot that can see players win one of four progressive jackpots that climb into the millions.

Jungle Mega Moolah is certainly a visual upgrade on the original Mega Moolah, however, don't expect too much, Microgaming has retained a degree of simplicity, and the overall presentation of this new online slot probably won't knock your socks off.

Behind the reels is you'll see a lush rainforest filled with plants and trees, whilst on the reels themselves, you'll spot some of the animal kingdom's most imposing beasts.

Navigating Jungle Megah Moolah is pretty straight forward. The spin button can be found on the right-hand side of the game reels, there's a small + button above it that allows players to set 10, 25 or 50 autoplay spins and change the speed of their spins to turbo mode.

Below the spin button is another button with coins on, this allows players to change their stake size from between 0.25 per spin and 6.25 per spin.

On the far left-hand side of the screen is hamburger menu that when opened up allows players to change their game settings, view the paytable and information regarding the game as a whole.

For what it is, we're genuinely disappointed with the win potential Jungle Megah Moolah offers. Players can only win a maximum of 1,955x their total stake which is pretty pitiful for a modern-day slot game released in 2020. The RTP isn't terrible for a progressive jackpot slot, sitting at 93.42%.

The game earns most of its points in the win potential department for playing host to the iconic Mega Moolah Progressive Jackpot. If it wasn't for that then this slot would have been quite a significant disappointment.

If you're a fan of the original Mega Moolah games then there's absolutely no doubt in our mind that you'll enjoy this slot. The game is packaged like an old-school game that is pure fun.

Enjoyed Jungle Mega Moolah? Here's a handful of similar slots we think you'll like too. These online slots have been chosen based on features and themes similar to Jungle Mega Moolah. You might also want to check out other Microgaming slots.