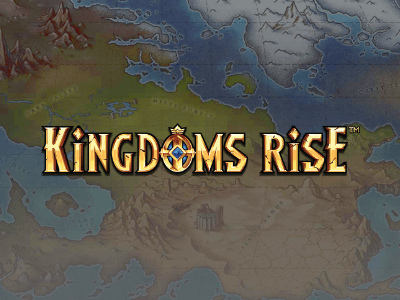 This lucrative jackpot series of online slot games from Playtech has risen to legendary status in a short period of time thanks to a number of unique features and mechanics that make Kingdoms Rise so special. Most players choose to play this selection of mythical themed slots for its three-tiered network progressive jackpot. If that doesn't pique your interest then maybe the innovative in-game currency and features shop that allows players to buy their way into big bonus rounds will.

Each Kingdoms Rise game offers players something a little bit different from the next which is part of the reason this series has enjoyed so much success in such a short period of time.

Playtech has gone down the same route they did with the Age of the Gods series and designed these games so that their volatilities varied wildly from the game-to-game. Some slot are low volatility, some high, similarly, some slots offer huge multipliers, whilst others are filled with free spins. One of the only consistent features in all of the slots was, of course, the incredible three-tiered Kingdoms Rise Jackpot.

Our team of expert slot enthusiasts got stuck into the Age of the Gods series and playtested each game, as a result, we've been able to come up with our own list of the very best Kingdoms Rise jackpot slots.

The Kingdoms Rise series has been consistently growing in size since its initial release, over five new slots were added to the roster in 2020 alone and we fully expect more to come as the years go by.

If you want to be in with a chance of winning one of the three lucrative Kingdoms Rise jackpots then we'd highly recommend giving these featured-filled mythical-themed online slots a spin.

The Kingdoms Rise series is a hugely popular collection of fantasy-themed online slots developed by renowned iGaming studio Playtech. Each of the story-driven Kingdoms Rise games is connected thanks to three unique features.

The first feature is an in-game shop that allows players pay to unlock a multitude of bonus features with game tokens that are collected during base gameplay.

These tokens remain in the players account regardless of which Kingdom’s Rise game they’re playing, and as long as they remain playing at the same casino they will remain with the players indefinitely, so they can earn tokens on Monday and redeem them days, or weeks later.

The second feature is a beautifully designed interactive map that helps flesh out the fantasy world Kingdoms Rise is set in. More importantly, it allows players to seamlessly jump from one game to another, without having to close the window and return to the casino lobby.

The third and final feature that unites all of the Kingdoms Rise slots is obviously the most important in our eyes! This is the hugely lucrative networked progressive jackpot that can be won by any player at any time regardless of their bet size.

0.55% of each spin the player makes when playing any of the Kingdoms Rise games contributes to the jackpots. 47.27% of this contribution funds the current jackpots, the remaining 52.73% funds the seed pot for the following jackpots.

Whilst players can win this jackpot with a small bet size, upping your overall stake does give you a better chance of winning one of the Kingdoms Rise networked progressive jackpots.

If you like to diversify your gameplay by playing a wide variety of different slots like the Kingdom Rise series, all whilst being in with a chance of winning a life-changing jackpot, then you'll definitely want to play Daily/Network Jackpots.

Not all jackpots are networked and spread across multiple online slots like the Kingdoms Rise Jackpot. There are plenty of games that are known for offering players the chance to win huge sums of money by playing that slot, and that slot only!