The Kingdoms Rise: Legend of Elvenstone slot is a new 2020 release from the guys at Playtech. This action-packed slot takes you into a world of fantasy with dragons, monsters and plenty of payouts. You will embark on a rewarding quest where wilds drop, multipliers up to 20x roam the reels and progressive jackpots are there for the taking.

Jump straight into the action and play Kingdoms Rise: Legend of Elvenstone now at the following fully licenced UK slot sites. These slot sites have been thoroughly audited and reviewed by the team here at Slot Gods to ensure they offer an exceptional user experience, are trustworthy, safe, secure, and boast the best selection of online slots in their portfolio including Kingdoms Rise: Legend of Elvenstone...

The industry experts at Playtech have a reputation for producing feature-full and immersive slot content and they have done just that with the new Kingdoms Rise: Legend of Elvenstone game. You will find plenty of extras on the reels with high paying symbols, a heap of bonus features and 3 randomly triggered progressive jackpot prizes. Let’s take a look at what you can find on the reels. 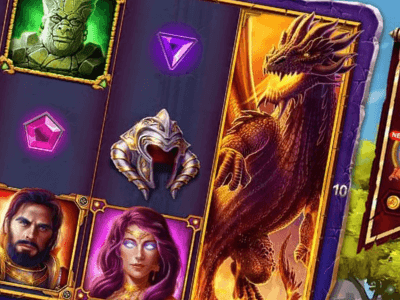 Land 4 or more dragon scatters and you will get 3 re-spins, during this, 9 central symbol positions spin independently while any dragons on reels 1 and 5 remain in position. A dragon eye symbol will also transform to increase the chances of winning combos. 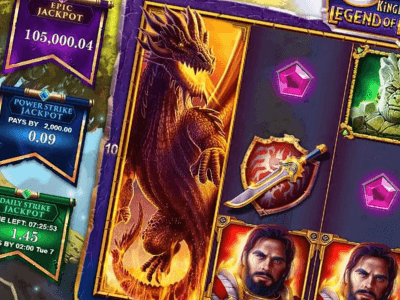 You’ll have a shot at landing 1 of 3 progressive jackpot prizes. These can strike at random on any spin. 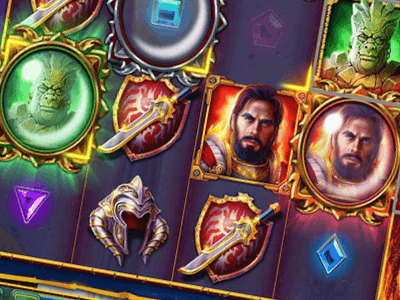 The Kingdoms Rise: Legend of Elvenstone slot is part of the Kingdoms Rise slot series from Playtech. This slot takes you on a warrior’s quest to slay a dragon in a world of monsters. This game is a little different to most other casino slots as you can earn tokens as you play which can be used to unlock bonus features.

The fantasy-themed game spins across 5 reels, 3 rows and 10 paylines. The game is absolutely packed with bonus content with wilds, multipliers and 3 randomly triggered progressive jackpot prizes.

The gameplay shares many attributes of a video game while maintaining all the fun of a slot game. The high paying video slot offers up to 1,000x your stake during the wild drop feature thanks to the possibility of hitting a 20x multiplier.

The Legend of Elvenstone slot is a graphically pleasing and immersive game that transports you into a rewarding world of dragons and slayers.

Kingdoms Rise: Legend of Elvenstone brings you into an epic fantasy world where dragons, monsters and warriors all live freely. The game has been crafted with incredibly immersive visuals that bring the screen to life and create an inviting fantasy atmosphere.

Set in a dark, dusty world of sinister creatures where danger lurks behind every corner, this game puts you in the centre of the thrilling action. The slot design does a great job of creating this world with fiery clouds, rock cliffs and dragon sparks falling from the sky. Don’t get used to the imagery though as it changes throughout the game, depending on what features are active and how far you have progressed. The enchanting game uses animation brilliantly to keep engagement levels high.

The reels boast stunning graphics with dragons, warriors, weaponry, gemstones and monsters all acting as the symbols. The background soundtrack is exactly what you would expect from a game dominated by fire breathing dragons.

When a win or a bonus feature is triggered you will enjoy some awesome animation that will get the adrenaline going. The game controls are also designed to seamlessly mould in with the rest of the game’s aesthetics.

The 5-reel slot has more features than your standard casino slot so there is a bit more going on in terms of the gameplay. The Kingdoms Rise slot series features tokens that players earn as they spin the reels; once you have enough tokens, they can be used to unlock bonus features.

The visually impeccable slot looks like a video game played rather than a casino game. Beneath the reels sits the game controls where you will find the spin button, total bet amount, auto spins and information icon. You can set up to 100 auto spins and place bets between £0.10 and £500, so it’s suitable for all budgets and bankrolls.

Kingdoms Rise: Legend of Elvenstone has a standard RTP of 92.84% but when you take the jackpot element (3%) and it rises to a far more enticing 96.84%. This is higher considering it’s a progressive jackpot slot.

The medium variance game comes with balanced payouts, but it’s the bonus features that unleashes the true payout potential. The wild drop bonus game offers up to 1,000x your bet with a maximum win amount of £500,000 outside of the progressive jackpots. If you are lucky you could scoop a massive win with one of the jackpot prizes, the Epic Jackpot is the largest and can offer a life changing payout.

Legend of Elvenstone is a fine addition to Playtech’s Kingdoms Rise slot series. The game does a great job of bringing out the fantasy genre with immersive visuals and awesome animation. The true gems are the bonus features and progressive jackpot prizes, making it a thrilling place to play. It’s not the most rewarding Kingdoms Rise slot but it is one of the most exciting. If you’re a fan of fantasy and like a flutter, this game would be your perfect slot.

Play Kingdoms Rise: Legend of Elvenstone now at the following verified UK slots sites. These slot sites are fully licenced and have been thoroughly vetted and reviewed by us to ensure they offer a great user experience, are trustworthy, secure, and have a wide variety of the best online slots in their lobbies including Kingdoms Rise: Legend of Elvenstone:-