Gonzo's Quest Megaways, as the name suggests is a Megaways reboot of the iconic NetEnt slot, this time created by the talented guys at Red Tiger Gaming. All of the features that made the original slot so popular have been retained, however, this time there are an impressive 117,649 ways to win as opposed to just 20!

Jump straight into the action and play Gonzo's Quest Megaways now at the following fully licenced UK slot sites. These slot sites have been thoroughly audited and reviewed by the team here at Slot Gods to ensure they offer an exceptional user experience, are trustworthy, safe, secure, and boast the best selection of online slots in their portfolio including Gonzo's Quest Megaways...

“ We didn't think this legendary slot could get any better, until now! ”

The Avalanche mechanic Gonzo’s Quest is universally known for has been retained, but only following a winning spin when symbols have been removed. In Gonzo’s Quest Megaways the 6 reels actually spin akin to a standard online slot, as opposed to falling from the sky into place.

The Free Fall feature has also been retained, however, it differs slightly with the addition of two exciting new features. The first of these is the Royal Wheel which appears before the bonus spins and allows players to take a gamble on winning even more free spins then they’d initially picked up… Beware! As great as this feature is, it’s risky and could quite easily go the wrong way resulting in lost spins.

The second new feature that’s included in both the base game and the Free Fall feature is unbreakable wilds. As the name suggests any wilds that fall onto the reels do not break! So when a new set of symbols fall in place they’ll benefit from the wild, just like those before did.

Finally, players should be aware of is the earthquake feature (shown in the video below). When earthquake symbols land on the reels they cause all low-paying symbols to be destroyed, only allowing high paying symbols to drop in and take their place.

If 3 free fall symbols land on the reels during the base game then players will trigger the Free Fall bonus. Each consecutive winning combination will see a multiplier climb in value up to 15x its original value. 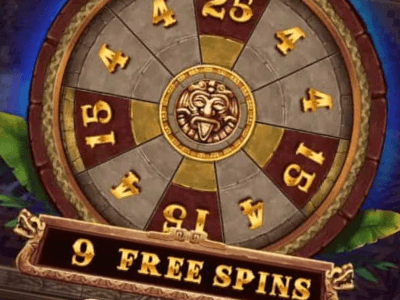 The Royal Wheel is a wheel of fortune style game that players can play before the Free Fall to gamble on winning even more free spins than they'd initially received. 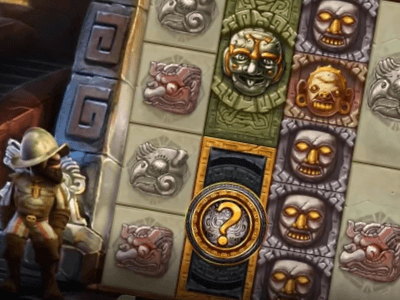 Wilds have the potential to be unbreakable, which means they're not removed from the reels following a winning combination! This way multiple spins can benefit from the same wild symbol.

Everyone’s favourite hairy Spaniard is back in the latest iteration of what is quite possibly NetEnt’s greatest ever online slot game, Gonzo’s Quest.

Gonzo’s Quest Megaways retains all the charm of the 2013 original with an absolutely massive bonus of having 117,649 ways to win thrown into the mix thanks to the Megaways mechanic.

With the Avalanche and Free Fall features that made the first game so popular thrown into the mix, alongside two HUGE new features, this game is undoubtedly on course to be an even bigger hit than the original if that’s even possible!

Gonzo’s Quest Megaways has seen an incredible upgrade in terms of graphics, which is to be expected considering 7 years has passed since the original game was released.

The basic concept of the original game remains in place, the reels are set in front of an ageing temple within the ruins of the lost city of El Dorado. Gonzo also remains stood to the left of the reels, however in this iteration of the game he has a whole new repertoire of moves including a snazzy Michael Jackson-style moonwalk whenever the player registers a big win.

The symbols have also had a revamp, with more intricate masks taking the place of high paying symbols whilst low paying symbols are stones carved into the shape of small heads.

In terms of how Gonzo's Quest Megaways sounds, everything from the original Gonzo's Quest slot has been retained. So you'll be able to enjoy calming ambient jungle sounds!

Up to 7 symbols may land on each of the game’s 6 reels at any time during the base game, giving players a maximum of 117,649 ways to win in total. Up to two wilds may land on the reels in the same spin, one for the first three reels and another for the second three.

Just like the original game every single time a new symbol drops into play a multiplier climbs up by one in the following order: 1x, 2x, 3x, 4x, 5x. Wins after the fifth drop in the chain are capped at 5x. During the Free Fall feature this can reach an impressive 15x.

If you have played the original, or any Megaways slot then you should know exactly what to expect, lots of big, exciting, multiplied wins! Of course, this is all boosted by the fact that new symbols drop into place thanks to NetEnt’s iconic Avalanche feature.

When you throw in the new features Red Tiger have added, greatly boosting players chances of registering winning spins, then we have to say that this game is well worth a spin as long as you’re comfortable with a volatile slot that takes a little bit longer to warm up than others.

With an RTP of 95% and a very impressive maximum win of 20,000x your initial stake, it's clear that this wonderful Red Tiger Gaming reboot is well worth a spin.

We were absolutely thrilled when we discovered Red Tiger Gaming, one of the most talented online slot developers in the business, were taking on the challenge of recreating Gonzo’s Quest in Megaways format for 2020, and we’re pleased to say we’re delighted with their efforts!

When someone new is tasked with revamping something so beloved as Gonzo’s Quest there’s always the chance mistakes can be made. But we’re delighted that the award-winning studio has taken absolutely everything we loved about the original game and have made it even more exciting and lucrative, without reinventing the wheel!  What more could you want?

Play Gonzo's Quest Megaways now at the following verified UK slots sites. These slot sites are fully licenced and have been thoroughly vetted and reviewed by us to ensure they offer a great user experience, are trustworthy, secure, and have a wide variety of the best online slots in their lobbies including Gonzo's Quest Megaways:-