NetEnt masterpiece Gonzo's Quest is one of the most popular online slots of all time, and for very good reason! This exhilarating 5-reel, 20 payline slot is known worldwide for its excellent bonus features and mechanics such as cascading reels, increasing multipliers and the incredibly lucrative free fall bonus!

Jump straight into the action and play Gonzo's Quest now at the following fully licenced UK slot sites. These slot sites have been thoroughly audited and reviewed by the team here at Slot Gods to ensure they offer an exceptional user experience, are trustworthy, safe, secure, and boast the best selection of online slots in their portfolio including Gonzo's Quest...

First and foremost Gonzo’s Quest is known for its Avalanche Reels that see symbols drop down, exploding and leading to what could potentially be a multitude of wins… However, that’s not all that’s good about this feature! Every single time a new symbol drops in a multiplier climbs up by one in the following order: 1x, 2x, 3x, 4x, 5x. Wins after the fifth drop in the chain are capped at 5x, however, we’re not complaining!

If you manage to land 3 free fall symbols (golden masks) during the base game then you’ll unlock the Free Fall bonus. This is essentially a free spin round, but instead of spins, it’s falls!

If you do manage to register a winning combination during this bonus round you’ll get a 3x multiplier. On the second and third Avalanche, you’ll benefit from 6x and 9x multipliers respectively. Once you’ve registered your fourth successive combination you can enjoy a very hefty 15x multiplier! 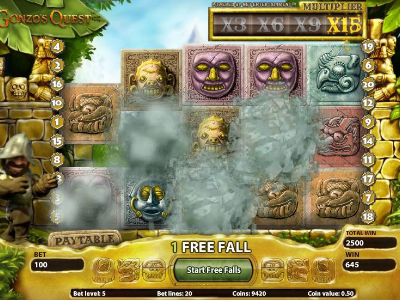 Every time players registered consecutive wins during the base game a multiplier climbs up in value. Players can multiply their overall win by a maximum of 5x its original value. 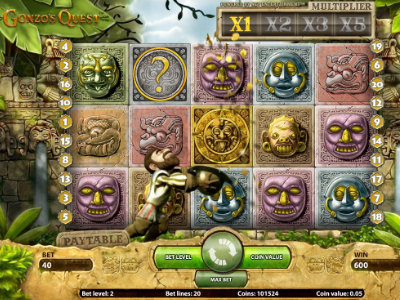 If 3 free fall symbols land on the reels during the base game then players will trigger the Free Fall bonus. Each consecutive winning combination will see a multiplier climb in value up to 15x its original value.

Arguably NetEnt’s greatest creation, Gonzo’s Quest is another one of those classic games that you just HAVE to try at least once in your lifetime if you’re truly passionate about online slots.

The game is centred around bearded Spanish Conquistador Gonzalo Pizarro, a chirpy little guy who is based on a real-life 16th-century figure whose brother conquered the Inca Empire. His aim in life is to get his hands on a stash of gold hidden deep within the city of El Dorado.

This 5-reel, 20 payline slot is famous for its innovative (at the time of release) Avalanche Reels that saw winning symbols fall from the sky, exploding when a combination was formed, allowing for new symbols to drop in and take their place. Factor in the free spins and multipliers and you’ve got yourself one hell of a fun game!

Straight from the moment you first load up the game you’re transported into Gonzo’s rich and immersive world! You’re greeted with a cutscene set in the year 1541 that sees Gonzo make a daring escape from a vessel on the coast of Peru to go in search of the lost city of El Dorado.

The game itself is set within a vibrant temple hidden deep within the jungle, water flows from an ominous-looking fountain on one side of the game reels, whilst on the other Gonzo himself stands looking somewhat lost at times, often looking around, scratching his beard and referring to a map to see if he’s on the right track in his hunt for gold.

When a big win takes place Gonzo really comes to life! Hopping around the screen and excitedly catching gold in his helmet. The addition of a character that actually interacts with the game during key moments really is a gamechanger in our eyes, it’s no surprise that other developers have taken inspiration from Gonzo’s Quest in that respect.

The symbols in Gonzo’s Quest are large stone slabs with masks carved into them that come in various colours. These are (valued highest to lowest): Grey, green, yellow, purple, orange, red and blue. The wild symbol is a grey slab with a question mark on it and the scatter symbol is a golden mask.

In terms of sound Gonzo’s Quest delivers exactly what you’d expect.. Ambient jungle sounds! Whenever the large stone slab symbols fall from the top of the screen onto one another they make a very satisfying noise (that we’ve found incredibly difficult to describe admittedly!), it’s even more satisfying when these stones explode into small pieces and new ones arrive.

All in all Gonzo’s Quest is incredibly simple to grasp, even for a brand new player. You can change the bet level which locks and unlocks the amount of paylines in play and you can change the coin value, which changes the overall value of your bet. Other than the Autoplay and Max Bet button that’s all there is to know when it comes to navigating the game!

The game is truly centred around the Avalanche Reels. This innovative mechanic, combined with a generous progressive multiplier is what has truly propelled Gonzo’s Quest to greatness.

Wins feel even more important than usual in this game because new symbols drop onto the reels immediately after another set has broken, making players feel as if they’re essentially getting a free spin (or drop in this case) after every single win. And who doesn’t like free spins?

When you factor in the Free Fall bonus on top of everything else it’s clear for all to see why this game is such a monumental success with online slot enthusiasts around the world.

Landing 5 blue and gold mask symbols during the base game will result in you winning an impressive 2,500x your stake, now take into account the multipliers and that can get a whole lot better!

Despite having a slightly below average RTP of 95.67%, Gonzo's Quest has a maximum win potential of 3,750x your initial stake which does go some way towards making up for it.  Regardless of RTP or maximum win potential, this slot has still proved to be INCREDIBLY popular.

There are so many things NetEnt got right when they created Gonzo’s Quest. Firstly, the game successfully tells an immersive story from the get-go, which is something many online slots try themselves and fail.

The veteran slot developers have gone out on a limb and created a game that looks, sounds and plays differently to your average online slot game, with a number of memorable features and mechanics built-in. Bear in mind this title was released all the way back in 2013!

If you compare this game to others released in 2013 you’ll be in for a shock, Gonzo’s Quest was truly ahead of its time, and more importantly has stood the test of time, even now many years later.

Play Gonzo's Quest now at the following verified UK slots sites. These slot sites are fully licenced and have been thoroughly vetted and reviewed by us to ensure they offer a great user experience, are trustworthy, secure, and have a wide variety of the best online slots in their lobbies including Gonzo's Quest:-

Enjoyed Gonzo's Quest? Here's a handful of similar slots we think you'll like too. These online slots have been chosen based on features and themes similar to Gonzo's Quest. You might also want to check out other NetEnt slots.