Monkey Modifiers are modifiers that can trigger randomly at any time during the base game.

King Kong Cash Bonus rounds are bonus features that are triggered when 3 bonus symbols appear anywhere on the reels. A wheel of fortune game is then played to determine which bonus feature you'll play. 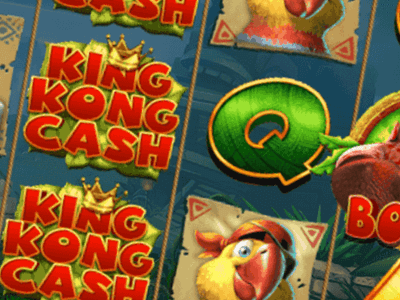 Monkey Modifiers are modifiers that can trigger randomly at any time during the base game, turning non-winning spins into winning ones and helping trigger King Kong Cash Bonus Rounds. 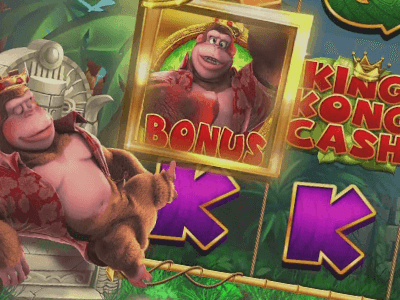 King Kong Cash Bonus Rounds are features that are triggered when 3 bonus symbols appear anywhere on the reels. A wheel of fortune game determines which feature is played.

King Kong Cash is a 5-reel, 20 payline slot developed by Blueprint Gaming that's known for its extensive list of exciting bonus features and mechanics that players can sink their teeth into. Wake up the game's lazy protagonist 'Sleepy Kong' and you could enjoy Banana Cannon Wilds, Golden Barrel Super Spins, Bonus Boosts, and the King Kong Streak. There's also a ton of modifiers you can trigger during the base game that could massively boost your bank balance.

This is a heavily-themed, wonderfully-designed online slot (we'd expect nothing less from Blueprint Gaming) is bright, vibrant and super cheerful! The reels are made out of bamboo and rope, whilst the symbols atop them feature friendly-looking animals including a crocodile, parrot, tiger, and rhinoceros. Special symbols include barrels, which are reminiscent over everyone's favourite video game gorilla Donkey Kong! Behind the reels sits a lush jungle and a pile of coins and other assorted riches.

There's even more cheer to be had once you get the reels spinning. Players are treated to music that wouldn't seem out of place in classic nineties Super Nintendo title Donkey Kong Country, in fact, there are a lot of similarities that can be drawn between the two titles.

Whenever a bonus is triggered Sleepy Kong will jump out of his throne (where he sleepily lazes as King of the Jungle) and get the bonus started with great enthusiasm, however, once it's all said and done he will get back to snoozing! So make the most of his hijinks whilst you can!

In terms of gameplay, King Kong Cash looks and feels like most standard Blueprint Gaming titles do, it's minimalistic and no-thrills, and that's not actually a bad thing. As a result, it's a lot of easier to enjoy on the wonderful design of this game without any additional clutter in the way.

Players can adjust their bet (to anywhere between 0.10 and 100) using the button on the left-hand side of the screen, whilst they the spin reels on the opposite right-hand side. There's also game info and an autoplay button in each of the two lower corners of the screen.

Whilst King Kong Cash does have a slightly below average RTP of 95.76%, it does offer players the opportunity to win 10,000x their initial stake AND trigger the highly lucrative Jackpot King Progressive Jackpot. We'd recommend this game if you're looking for something that does offer value for money, considering it's low to medium volatility you can expect fairly frequent payouts as well.

All in all, we have to say that King Kong Cash is a pretty good game. and it hardly comes as a surprise that it's spawned a handful of sequels since it's original release thanks to the memorable design and everyone's favourite Gorilla Sleepy Kong. The addition of the Jackpot King's Progressive Jackpot later on in the slot's lifespan really pushed this game up a notch in our estimations.

Play King Kong Cash now at the following verified online slot sites. These slot sites have been thoroughly audited and reviewed by us to ensure they offer an exceptional user experience, are trustworthy, safe, secure, and boast the best variation of online slots in their portfolio including King Kong Cash:-

Enjoyed King Kong Cash? Here's a handful of similar slots we think you'll like too. These online slots have been chosen based on features and themes similar to King Kong Cash. You might also want to check out other Blueprint Gaming slots.