Rich Wilde and the Book of the Dead is one of the most popular online slots of all time. This 5-reel, 10 payline slot is incredibly beginner-friendly, with very little in the way of confusing mechanics, which is probably why so many casinos choose this game as part of their welcome bonus! If you like classic slot gameplay with a few little twists and turns then this Egyptian themed slot is the perfect choice!

Play Rich Wilde and the Book of Dead

Jump straight into the action and play Rich Wilde and the Book of Dead now at the following fully licenced UK slot sites. These slot sites have been thoroughly audited and reviewed by the team here at Slot Gods to ensure they offer an exceptional user experience, are trustworthy, safe, secure, and boast the best selection of online slots in their portfolio including Rich Wilde and the Book of Dead...

Rich Wilde and the Book of Dead Screenshots

Rich Wilde and the Book of Dead Features

As the name of the game suggests, everything revolves around the Book of Dead. The aim of the game is for players to land 3 Book of Dead scatter symbols any time during the base game in order to unlock a free spins round.

Upon unlocking the bonus a random symbol from the paytable will be selected to become an expanding symbol, if it shows up during any of your 10 free spins then it will expand to cover the entire reel, unlocking many more wins.

It should be noted that the Book of Dead scatter symbol also pays out anywhere on the reels. Scatter wins are multiplied by the total bet staked and are added to the payline wins. If you’re lucky enough to land 5 together you’ll receive 200x your initial stake.

The only other feature of note is the memorable gamble feature that appears in all Rich Wilde games. After every win players can choose to risk their winnings by guessing the colour of a playing card. If you guess correctly you’ll receive double your money. You can instead opt to guess the suit (from a possible four) in order to quadruple your money. 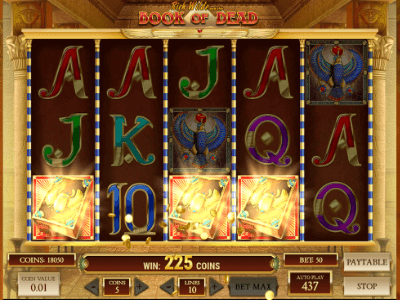 If players land three or more scatter symbols anywhere on the reels during the base game they'll trigger 10 free spins with expanding bonus symbols present. 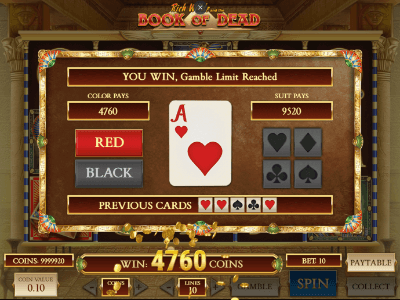 Players can gamble to double or quadruple their money by playing a simple card game after each and every base game win. Lose though, and the winnings are forfeit.

Rich Wilde and the Book of Dead Review

Rich Wilde and the Book of Dead is iconic. There’s quite simply no other way to describe this classic 2014 Egyptian themed online slot from developers Play’n GO.

The third title in the ongoing series, this 5-reel, 10 payline game sees our hero and now accomplished adventurer Rich Wilde travel to tombs and pyramids of ancient Egypt in search of the elusive Book of Dead.

Like other entries in the series, the premise isn’t exactly original, and many players tend to draw parallels between this game and Novamatic’s Book of Ra… Despite their obvious similarities it has to be said that Rich Wilde and the Book of Dead is still a game well worth your time and will go down in history as one of the most popular slots ever created.

The game is very reminiscent of Rich Wilde and the Aztec Idols, the layout is much the same in terms of button and reel placement. The only real difference is the setting, rather than a Mexican jungle the game is set within a lavish golden tomb no doubt belonging to a King.

Perhaps part of the reason this game has seen so much success is down to its visuals, all in all, it’s nothing spectacular, but it’s not often we see a slot utilise such rich and vivid colours.

In terms of audio, Rich Wilde and the Book of Dead has an atmospheric Egyptian soundtrack that is both relaxing (as far as background music goes) and exciting once players ramp up the heat with a succession of high paying wins during the bonus round.

Rich Wilde and the Book of Dead is an incredibly popular game, and it’s not hard to see why. It’s incredibly simple to grasp and there really isn’t much you need to know before loading it up and spinning the famous reels.

Anyone who has played any of the previous games will instantly recognise the layout of the game, with the betting options placed along the bottom of the screen. Like its predecessors, the only small issue we have is that the gamble and collect buttons aren’t more prominent.

As this game has a high volatility much like the original Rich Wilde game there’s always the opportunity for some huge wins, which is what ultimately makes this game worth playing… Especially when you factor in the max win of 250,000 coins.

You might not trigger bonuses as often as you might like, but when you finally do manage to hit one then you can trust that you’re in for a real treat. Like all high volatility slots, it just takes a little bit of patience and careful money management.

There’s a reason Rich Wilde and the Book of Dead is so popular with players and casinos alike. Because it’s an all-round great game. It’s well designed, has bonus features and mechanics that are easy to understand and of course, the winning potential is there for all to see.

We’d especially recommend this game if you’re a beginner player, it’ll give you a good taste of what to expect going forward without overwhelming you.

Play Rich Wilde and the Book of Dead