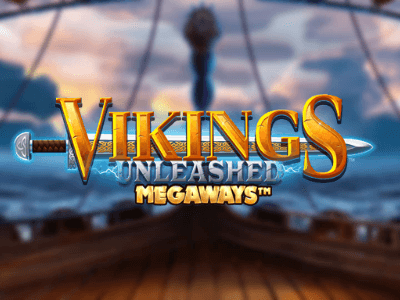 Vikings Unleashed Megaways is a wonderfully designed 6-reel, 117,649 ways to win Megaways slot developed by Blueprint Gaming! This epic Viking-themed title not only looks and sounds AMAZING but boasts some pretty awesome bonus features and mechanics as well... Players can enjoy wilds, mystery symbols and free spins with an unlimited win multiplier that increases after every cascade!

“ This Viking extravaganza is one of the very best Megaways slots going! ”

Vikings Unleashed Megaways features Mystery Symbols, these purple Thor's Hammer symbols can land anywhere on the reels and will automatically transform into another symbol (except the scatter) in order to form a winning payline.

If players land four scatter symbols anywhere on the game reels then they'll automatically trigger 12 free spins. These free spins come bundled with an unlimited win multiplier which climbs up every time players register a winning combination and symbols are removed, allowing for new ones to drop into place.

Vikings Unleashed Megaways features Mystery Symbols, these purple Thor's Hammer symbols can land anywhere on the reels and will automatically transform into another symbol (except the scatter) in order to form a winning payline.

It's time to grab your biggest battleaxe and set sail on the choppy North Sea alongside a band of Viking Warriors in this truly superb 6-reel, 117,649 ways to win Viking-themed slot! Developed by the talented team at Blueprint Gaming Vikings Unleashed Megaways is visually stunning, genuinely fun to play and is home to a host of bonus features including wilds, mystery symbols and free spins with an unlimited win multiplier that increases after every cascade!

Where do we begin with this slot? Vikings Unleashed Megaways is absolutely gorgeous when it comes to design! The reels are set at the bow of a great Viking longboat on what looks like the pages of a tattered old map. Behind the reels is the ship itself bobbing up and down in the rough seas with waves dramatically crashing into the boat.

Low paying symbols are stylised versions of your standard 10, J, K, Q, A whilst high paying symbols include a cunning old wizard, a Viking lady, a hairy ginger Viking and a Viking brandishing a golden spear. The game's mystery symbol is Thor's hammer whilst the scatter symbol is a Viking helmet in which the eyeholes are lit up.

Blueprint Gaming has truly excelled when it comes to this game's soundtrack. Players are treated to a cinematic score that wouldn't feel out of place in a blockbuster movie or AAA video game. This epic music featured in this slot will most certainly egg you on to go after those big money Megaways wins!

Vikings Unleashed Megaways shares all of the same qualities your stereotypical Megaways slot boasts! There's an additional row of four symbols that feature at the top of the game reels and symbols come in each and every size on the main set of reels, these are removed from the game reels whenever a winning combination is formed, thus allowing for new symbols to fall into place.

In terms of navigating and playing the slot, it couldn't be much easier as Vikings Unleashed Megaways follows the same conventions as most standard Blueprint Gaming slots. Players can change their stake using an up and down arrow on the left-hand side of the reels and can set up to 100 automated spins using a small auto button or spin manually by pressing a wooden shield found on the right-hand side of the reels.

This medium/high volatility slot has a pretty impressive RTP of 96.50% and an even more impressive maximum win potential of 50,000x the player's initial stake, which is undoubtedly what draws most players in when they load up this fantastic Blueprint Gaming title.

We genuinely mean it when we say this might well be one of Blueprint Gaming's best slots, and one of the best Megaways slots we've had the pleasure of playing! It looks absolutely fantastic, sounds great and of course, plays well! Our only complaint is that there could perhaps have been a few more bonus features and mechanics, but with 50,000x the player's stake on the table, we really can't complain!