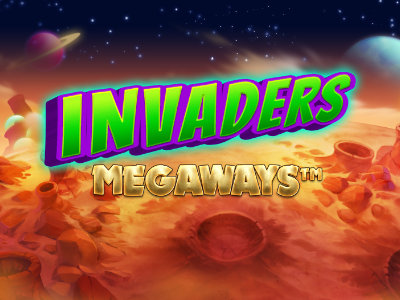 Invaders Megaways is a 6-reel, 1,000,000 ways to win (yes one million) UFO-themed slot developed by WMS. This unique title is notable for featuring a UFO Wild Selector mechanic. This weird and wonderful addition sees a random symbol turned wild on every single spin of the reels. If that wasn't enough players can enjoy a generous number of free spins with random modifiers that can help players towards wins as high as 25,000x their stake.

Jump straight into the action and play Invaders Megaways now at the following fully licenced UK slot sites. These slot sites have been thoroughly audited and reviewed by the team here at Slot Gods to ensure they offer an exceptional user experience, are trustworthy, safe, secure, and boast the best selection of online slots in their portfolio including Invaders Megaways...

“ We suggest you play Invaders Megaways, it's truly out of this world! ”

During base gameplay a flying saucer floats above a static horizontal game reel, on each and every spin this UFO will select a symbol from the row to become wild.

Any instance of that symbol showing up on reels 2, 3, 4 and 5 will turn wild, potentially leading to more winning combinations.

During the Mythical Unicow feature and free spins feature all instances of a random symbol will turn wild, not just those within the middle four game reels.

On any base game spin there's a chance that the Unicow (a cow piloting a flying saucer) will appear. This causes all reels to show between 7 and 10 symbols (thus unlocking between 117,649 and 1,000,000 ways to win).

If players manage to land between 3 and 6 bonus symbols then they'll automatically trigger free spins.

During the free spins bonus feature a random symbol will be chosen to act as a wild for a single spin, depending on the symbol a different modifier may come into play, these are as follows: 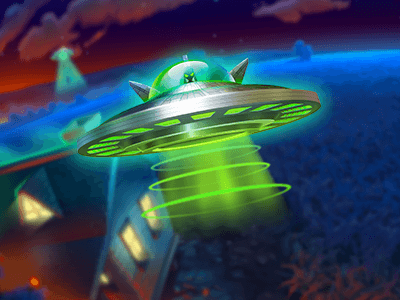 A static horizontal game reel sits above the game reels. On each and every spin a UFO floats around and stop on one random symbol on the static reel, the said symbol will turn wild for the duration of that spin. 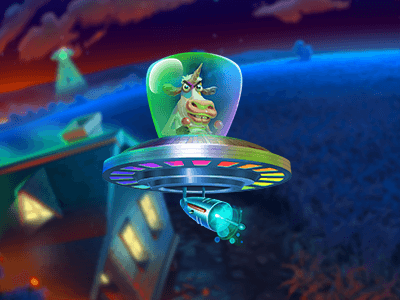 The Mythical Unicow may appear randomly on any base game spin. If he does he will cause all of the game's reels to show a minimum of 7 symbols, unlocking between 117,649 and 1,000,000 ways to win. 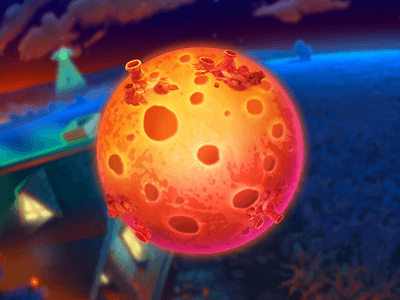 Players can trigger between 4 and 15 free spins by landing bonus symbols on the game reels. During the free spins high paying symbols will come with a modifier if it is chosen on the UFO Wild Selector.

Invaders Megaways is a 6-reel Megaways slot developed by WMS that boasts an incredibly impressive 1,000,000 ways to win (yep, you read that right! This slot offers players one million ways to win!). Aside from the epic number of ways to win, this brilliant game is most notable for a UFO wild selector mechanic that sees a random symbol chosen by UFO to become wild each and every spin.

This UFO-themed slot features subtle nods to classic movies and folk tales about flying saucers abducting cows from farmer's fields. Behind the game reels is a farm filled with mysterious crop circles, as you would expect, a UFO floats ominously in the sky looking to abduct test subjects for experimentation.

In terms of game symbols, low paying ones are your standard 9, 10, J, Q, K and A. High paying symbols include an alien ray gun, a cow being lifted by a tractor beam, an alien giving the peace sign, a mad scientist and the invaders game logo. Special symbols include the word WILD and the word BONUS in front of a distant planet,

This game features an apt techno soundtrack and has plenty of dramatic zap noises as the UFO floating around shoots its tractor beam down on the game reels sparking symbols and turning them wild. The music isn't too exciting, but it fits the bill.

This game differs from most Megaways slots because of the UFO wild selector mechanic that you won't find anywhere else. On each and every spin of the reels a UFO will float along a static horizontal game reel that features all of the game' symbols from 9, the lowest paying symbol through to the highest paying invader symbol.

Another unique feature players will notice about Invaders Megways is that there's a green laser beam surrounding the middle four reels (2 to 5). The UFO wild selector mechanic will see any symbols it selects turn wild as long as they fall within the confines of that laser beam.

It's worth noting that Invaders Megaways features a button within the game settings that allows players to flip the main gameplay buttons from the right-hand side to the left-hand side, so that left-handed players can play with more ease.

This high volatility slot has an RTP of 96.30% and can see players win a maximum of 25,000x their initial stake!

Invaders Megaways is out of this world! We genuinely found it difficult to find any negatives about this WMS slot, it offers everything we'd want from a sleek and modern Megaways slot (and more).

Play Invaders Megaways now at the following verified UK slots sites. These slot sites are fully licenced and have been thoroughly vetted and reviewed by us to ensure they offer a great user experience, are trustworthy, secure, and have a wide variety of the best online slots in their lobbies including Invaders Megaways:-

Enjoyed Invaders Megaways? Here's a handful of similar slots we think you'll like too. These online slots have been chosen based on features and themes similar to Invaders Megaways. You might also want to check out other WMS slots.