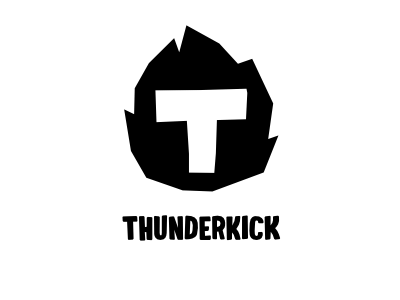 Thunderkick's journey began in 2012 with a small studio in Stockholm with a couple of guys who decided to create slots that were unusual but always fun. From beloved franchises such as Esqueleto Explosivo to the magnificent 1429 Uncharted Seas with an incredible RTP at 98.5% - Thunderkick are dedicated to staying independent and releasing slots that you'll only find at their studio.

If you're looking to play some of the best Thunderkick slots then look no further. We've personally spent months playing all of the titles Thunderkick has to offer, digging deep into every aspect of what makes these games great.

All of the games shown below are ones we consider worthy of being called the very best Thunderkick online slots.

Searching for new Thunderkick online slots? We understand the importance of variety when it comes to playing at your favourite online casinos, and that's why it's vital to keep on top of each and every new slot release.

We're proud to bring you a comprehensive list of new Thunderkick online slots that have been thoroughly playtested and reviewed. We can confidently confirm these slots are safe, reliable and most importantly, enjoyable to play.

Below you'll find a complete list of Thunderkick online slots in alphabetical order. Click on a slot to find out more about it and play for free.

Thunderkick are famed for developing one of the best Mexican slot series, the Esqueleto Explosivo series. Each slot contains unique gameplay, melodic music and some fantastic wins!

Stay up-to-date with what's coming soon from Thunderkick! We've managed to get exclusive early access to some of Thunderkick's best new upcoming slots and are sharing them with you right here.

Are you looking for the best slot sites to play Thunderkick slots? The expert team here at Slot Gods have scoured the internet to find a collection of online casinos that are more than worthy of your patronage.

Not only will you find all of the Thunderkick titles here, but you'll also have a great time playing them with the assurance that your funds and winnings are safe and secure.

It all began in 2012 with a tiny studio in Stockholm with just a couple of guys who wanted to make their mark in an industry full of giant studios. Their aim from to create slots that stay fun and actually give a damn.

They have now grown up to fifty-something people with over 50 games but still remain independent. Ultimately, their strategy is to create 'kick-ass content that leaves no one untouched'.

Since its inception, Thunderkick has been nominated for multiple awards including 3 nominations from SlotCatalog for the top 10 most qualitative and highly positioned game releases for the Japanese, Swedish and Ukrainian markets for Pink Elephants 2. They have even been nominated for Best Provider of Year and Best Slot with Esqueleto Explosivo 2 by AskGamblersAward.

Some of their most popular titles include the Esqueleto Explosivo series, Not Enough Kittens, Birds on a Wire and 1429 Uncharted Seas. They have a variety of themes varying from Mexican, Oriental and even WTF!

Despite being fairly new within the iGaming industry, Thunderkick are here to stay with some of the best slots we've ever seen!