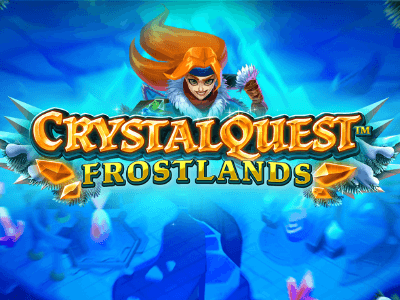 Crystal Quest: Frostlands is a 6-reel, 4,069 payline slot developed by Thunderkick that follows in the footsteps of Crystal Quest: Arcane Tower and Crystal Quest: Deep Jungle. This chilly adventure-themed slot boasts bonus features and mechanics such as wilds, massive symbols, unlimited win multipliers and free spins. If that wasn't enough to get your attention the maximum win potential of 15,000x your stake might well intrigue you (it did us)!

“ The best slot in the Crystal Quest series to date! ”

All game symbols except for the scatter and the wild can appear as a massive symbol. These massive symbols can either land on the reel as a 2x2 symbol or a 3x3 symbol. A massive symbol will crush all of the symbols underneath it!

All symbols that form part of a massive symbol will pay separately when included in a winning combination.

Every time players register a winning spin the symbols encased in ice blocks will shake and explode, this allows for new symbols to fall into place and lead to another winning payline. After every one of these cascades, a multiplier climbs up by 1x. There's absolutely no limit on how high this multiplier can potentially climb!

If players land 3 treasure chest scatter symbols anywhere on the reels during base gameplay then they'll automatically trigger 12 free spins with an unlimited win multiplier that does not reset following a losing spin.

If 2 scatter symbols land during the bonus game at any time players will receive an additional 3 free spins. Any scatters thereafter will award players 2 extra free spins.

If players receive no wins from the free spins feature then the Wild Explosion mechanic will come into play, this places a random number of wilds on the reels which explode, leading to a cascade and winning combinations.

All game symbols except for the scatter and wild can appear as a massive symbol. These symbols can either land on the reel as a 2x2 symbol or a 3x3 symbol. All symbols forming part of a massive symbol pay separately following a win.

If players land 3 scatter symbols on the reels during base gameplay then they'll trigger 12 free spins with an unlimited win multiplier that does not reset. If players receive no wins from the free spins then the Wild Explosion will occur.

If players land 3 crystal treasure box scatter symbols on the reels then players will receive 12 free spins with an increasing win multiplier that doesn't reset after an unsuccessful spin. If no wins are recorded wilds explode on the reels to form one.

Crystal Quest: Frostlands is a 6-reel, 4,069 payline slot developed by Thunderkick. This slot is the third instalment in the Crystal Quest series and sees players once again join up with the game's heroine Gemma, this time to tackle the brutal landscapes of the Frostlands. This slot features wilds, massive symbols, unlimited win multipliers and free spins.

If you've played any of the other games in the Crystal Quest series, it's quite likely that you're going to know what to expect. This game looks and feels like a cluster pays slot in the fact that individual symbols fall from the top of the screen frozen in blocks of ice as opposed to rolling in on an entire reel.  Low paying symbols are different coloured gemstones whilst the two highest paying symbols include a warrior clad in gold with a ruby sword and a very menacing Yeti.

In terms of sound, this game features a high-octane soundtrack with a loud beating drum that had us ready and raring to go as soon as we started listening. If you listen carefully you'll also hear the sound of raging icy winds.

As mentioned in previous Crystal Quest reviews, our only major complaint with regards to design is that the game's main character Gemma doesn't feature in the game itself, what's the point of having a main character if she doesn't show up during gameplay?

This is the third time we've mentioned it now across all three reviews in the series, but despite not looking like it, this game plays as you would expect any standard 6-reel slot to play. Wins are registered from left to right and winning symbols explode and are replaced by new ones, leading to some very tasty wins... Especially thanks to the unlimited increasing win multiplier that can be found to the left of the game reels.

Crystal Quest: Frostlands is a high volatility slot with an RTP of 96.16% and a maximum win potential of 15,000x the player's stake, which is the same as the previous two games in the series.

Crystal Quest: Frostlands is certainly the best game of the Crystal Quest series so far thanks to the massive symbols that shake things up a little bit. However, that being said, it hasn't evaded us that all three games are practically identical but for a few things here and there.