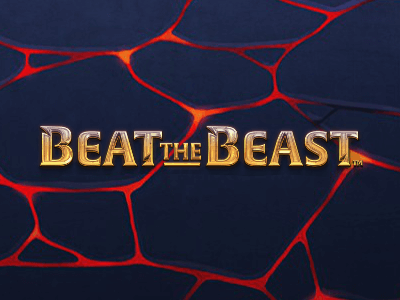 Face the greatest monsters throughout history in Thunderkick's Beat the Beast series! From the infamous Kraken to the terrifying Cerberus, no monster is left undefeated in this series.

Each of the slots plays on 5-reels with 9 paylines, but all have the potential to become greater with some outstanding wins in this high volatility slot series. Are you brave enough to battle these beasts and gain their riches?

Read more about Beat the Beast ›

See If You Can Beat The Beast!

Created and developed by Thunderkick, this mythical slot series takes you on a journey to conquer different monsters and reclaim the hidden treasure. From a glorious Griffin to a Kraken, you can find some of the mightiest creatures throughout mythical lore in this outstanding slot series.

There's no denying that each slot in this series has instantly recognisable monsters that are both frightening and exciting to watch. Whether it's a Cerberus or a Kraken, each of the monsters is unique and bring their own cash prizes into the fold!

Thankfully, all of the slots have the same set-up of 5-reels with 9 paylines. Of course, there are different mechanics throughout but the core gameplay of the emblems acting as wilds to trigger free spins remains the same throughout the series. So, it's easy to just pick and play the slot.

Within the vast collection of online slots, we'd struggle to name a series that covers a vast area as much as Beat the Beast. You can travel from ancient Egypt to the depths of the ocean in an instant with varying payouts on each of them.

Amazingly, each of the slots has a solid win potential with RTP above average and a high volatility level. If you think you have what it takes to conquer these beasts, then you should definitely check out what it has to offer.