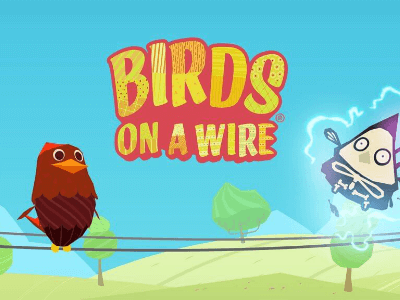 It's utter chaos as the high voltage generator has gone absolutely crazy and no one has warned all the birds in the area. All these birds better watch out when they land on the telephone wire as they are in for a shock.

Developed by Thunderkick, Birds on a Wire plays on 5-reels with 15 paylines and the potential for players to win up to 9,000x their stake. So settle in and prepare for an 'egg-citing' slot!

Play Birds on a Wire

Jump straight into the action and play Birds on a Wire now at the following fully licenced UK slot sites. These slot sites have been thoroughly audited and reviewed by the team here at Slot Gods to ensure they offer an exceptional user experience, are trustworthy, safe, secure, and boast the best selection of online slots in their portfolio including Birds on a Wire...

Birds on a Wire Screenshots

Birds on a Wire Features

From the offset, Birds on a Wire is not only bizarre in style but also features a huge range of features. It all begins with the dropping symbols that get replaced when you win and continues as long as you win (similar to cascading reels).

This slot also features a multiplier system that increases with every win. Players can win up to x5 in multipliers during the base game, whilst it can reach up to x20 during the bonus game.

The next feature includes a free spins round that can lead to up to 34 free spins! Aside from that, the slot has wild symbols that substitute everything except the scatter. As soon as all free spins have been played in the bonus game, the inwinity spin is activated. It will remain active and spin until you win. Birds on a Wire Review

It's well-known that birds love to sit on perches and just watch the world from up above. Unfortunately for these birds, the high voltage generator has malfunctioned and the telephone wire is a hot zone for electric shocks. Fortunately for players, this means that you can win even more and gain increasing multipliers!

Developed by Thunderkick, Birds on a Wire plays on 5-reels with 15 paylines and gives players the chance to win up to 9,000x their stake. This wacky slot is a mixture of WTF and animal themed to create something utterly unique, we guarantee you'll not play anything like this one.

The background of the slot features a cartoony and minimalist background that looks straight out of a Dr Suess book. It's extremely colourful and vibrant to create something that stands out.

Thankfully, the birds themselves are all distinct and stand out in the background. There are a variety of birds that act as symbols to match on the paylines. Once you land a winning payline, the birds on that line will be shocked and fried.

When birds are zapped, they make subtle screaming noises and each bird has a unique noise exclusive to them. Ultimately, it's both hilarious and terrifying to watch - it's definitely a slot for hidden sadists.

Other sounds include the jazz music in the background that can only be described as elevator music along with ambient sounds such as birds flapping and the noises from the cats in disguise.

Similar to Not Enough Kittens, this slot may seem complicated but it's incredibly straightforward. You set your bet and spin in hopes of winning big or triggering the free spins round.

Just like most other Thunderkick slots, this one features up to 5,000 autospins which can be found to the bottom right of the reels. Alongside it is the spin button and the bet level. Other menus can be found to the left if you want to adjust sounds or check on the paytable.

As the RTP is 96.10%, Birds on a Wire has a solid RTP that is respectable in regards to online slots. It's also a high volatility slot which means payouts are less frequent but higher when they do - so make sure you have the bankroll to sustain your payout.

Players can win big by filling the reels with wilds and the multiplier of up to x20 during free spins which can lead to the maximum payout of 9,000x your stake. For some high rollers, this could be seen as quite low but the slot makes up for it with its unique charm.

We don't condone animal cruelty, but Birds on a Wire is pretty hilarious and fun to play. It's completely unexpected and will hopefully gain a cult following in the future with the utterly bonkers gameplay and premise. Thankfully, the win potential is decent enough with a solid RTP and an average payout for a high volatility slot.

Of course, high rollers will perhaps prefer slots like Dead or Alive 2 or Razor Shark which have much bigger payouts. If you want something unexpected and creative with a decent win potential, check out Birds on a Wire.

Play Birds on a Wire

Play Birds on a Wire now at the following verified UK slots sites. These slot sites are fully licenced and have been thoroughly vetted and reviewed by us to ensure they offer a great user experience, are trustworthy, secure, and have a wide variety of the best online slots in their lobbies including Birds on a Wire:-

Enjoyed Birds on a Wire? Here's a handful of similar slots we think you'll like too. These online slots have been chosen based on features and themes similar to Birds on a Wire. You might also want to check out other Thunderkick slots.