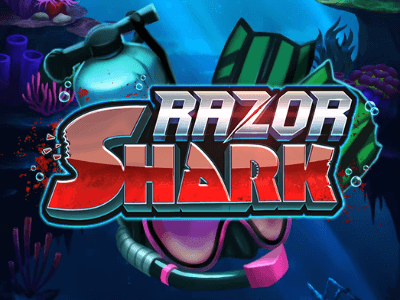 Make sure to grab your snorkelling gear and dive deep into the deep sea in Razor Shark. You can find treasures hidden under the ocean, but make sure to watch out for sharks.

Developed by Push Gaming, Razor Shark is full of all the features you’ll need with free spins, mystery stacks, scatters and razor reveal. There is no record limit, so there’s unlimited potential with the maximum win!

“ Sink your teeth into this slot with an unlimited win potential! ”

Landing 3 or more of the scatter symbols, then you trigger the free spins. Ultimately, this can lead to multiplier features. Aside from the free spins, you can activate the Nudge & Reveal from landing mystery stacks of 4 symbols with further payouts available from this weekend.

The scatter symbol is highlighted by the sea mine symbol. If 3 of these symbols land anywhere, the free spins round is triggered. Additional scatters reward an extra free spin with each one causing the mystery stack to nudge one position.

Free spins are activated once you land 3 or more scatters with the second and fourth reels filling with mystery stacks. The multiplier starts at 1x with each nudge & reveal feature increasing the multiplier.

Dive deep into the ocean for the chance to win a multitude of treasures awaiting at the bottom. In Razor Shark, you want to dive head first for the sharks in order to find better treasures. It plays on 5-reels and 20 paylines with the potential for players to win 85,475x their stake!

Developed by Push Gaming, this animal themed slot is all about the creatures of the deep. It’s a high volatility slot that involves free spins and multiple mystery symbols that’ll change your gameplay for the better.

When you initially open up the slot, you’ll notice that a few fish begin to gather around the reels. The setting is deep underneath the ocean surrounded by coral and sea life. Clownfish and other famous sea creatures from Finding Nemo can be found swimming around the reels.

As you can imagine, the music is just as impressive. With steel drums and tropical sounds, it creates the perfect atmosphere for an underwater adventure. The ambient water sounds during spins just adds the finishing touches to make Razor Shark a full experience.

All the relevant menus and information can be found at the bottom of the screen starting with the settings button and payline to the far left. The sound and bet level are situated towards the bottom middle of the reels. Autospin and the spin button is just to the far right with the chance to set up to 100 autospins.

There’s nothing to worry about with the gameplay as it’s incredibly easy to pick up and play. It uses the traditional system of spins and paylines with no confusing additions. There are a few features but each one is explained to the players.

As a high volatility slot, Razor Shark is one that is best for high rollers who have the bankroll to sustain their gameplay. With an RTP at 96.70%, Razor Shark is a slot with a great RTP rate meaning that the theoretical return is fairly high.

According to the developers, there is an infinite win potential, but the highest recorded win is 85,475x your stake. During the base game, you can win up to 50x your stake by rolling 5 of the blue sharks. With multipliers and the shark features in the game, you can win even bigger amounts.

Aesthetically, Razor Shark is phenomenal. The design is fun and mixes well with the audio to create an underwater atmosphere. Even the features are creative with different rewards to help you throughout your playthrough with nudges and mystery stacks.

Honestly, if you love animal themed slots or high volatility slots with a rewarding maximum payout, then Razor Shark should be one to check out. There’s nothing fundamentally wrong with this slot and there’s definitely no reason not to check this out.

Play Razor Shark now at the following verified online slot sites. These slot sites have been thoroughly audited and reviewed by us to ensure they offer an exceptional user experience, are trustworthy, safe, secure, and boast the best variation of online slots in their portfolio including Razor Shark:-

Enjoyed Razor Shark? Here's a handful of similar slots we think you'll like too. These online slots have been chosen based on features and themes similar to Razor Shark. You might also want to check out other Push Gaming slots.