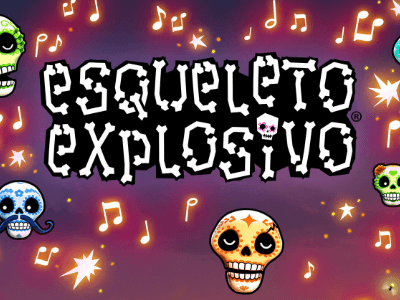 Join Enrico Mortis and his mariachi band, The Boners, to celebrate The Day of the Dead with them. Developed by Thunderkick, Esqueleto Explosivo mixes harmony with explosive wins to create something utterly unique.

Playing on 5-reels with 17 paylines, this slot features dropping symbols, mucho multipliers of up to x32 and explosivo wilds that destroy 8 surrounding symbols. Esqueleto Explosivo is a low volatility slot filled with vibrant and thrilling ways to win.

“ Something that you definitely have to experience for yourself! ”

Esqueleto Explosivo is magnífico in regards to features and design. Symbols drop and replace after wins for a second chance to win. On top of that, there is an explosivo wild that blows up 8 surrounding symbols and increases the multipliers.

The multiplier starts at x1 and can grow up to x32 by each win on a drop or by the explosivo wild.

When you win on a payline, the symbols you win on get replaced with new or existing symbols. Ultimately, this continues as long as there is a new win.

Each win on a drop can increase the multiplier by at least one level. An explosivo wild appearance also can add a multiplier as well with the potential to reach up to x32 multiplier.

This wild will blow up the closest 8 symbols surrounding for a better chance to win and also to increase the multiplier. Of course, this wild substitutes for all other symbols as well.

It’s not very often that you can have a party and witness skull heads blow up. In Thunderkick’s Esqueleto Explosivo you get the chance to celebrate The Day of the Dead with an undead mariachi band and witness them get their heads blown off.

Of course, this is all in good fun and is spellbinding to watch. It’s hard to fully define what this slot is, but it’s a combination of a Mexican slot and a music slot. With the bizarre gameplay, we’d even say it’s close to WTF!

It the first in the Esqueleto Explosivo series and plays on 3 rows, 5-reels with 17 paylines and features a group of singing mariachis. Ultimately, it’s a low volatility slot with a solid RTP at 96% and a win of 700x your stake.

From the offset, this slot is something spectacular. You are situated in an alleyway during The Day of the Dead festival and it’s filled with vibrant and colourful designs. Everything in the background is beautifully designed and animates slightly with the wind blowing.

Of course, the star of the slots has to be Enrico Mortis and his mariachi band called The Boners. Each sugar skull has a unique design and is easily distinguishable. Not only do they look great and even animate, but they also sing during wins. It’s so incredibly entertaining to watch and it’ll make you so excited to win!

Other sounds include general ambient noises such as music playing and people celebrating via fireworks. It makes Esqueleto Explosivo feel like a full world full of unique characters and we love it! This combined with the charming mariachi band makes it a solid slot in terms of design.

When playing online slots, most players are used to the reels spinning and disappearing. Well, in this slot you can expect the symbols to explode or just fall completely off the reels. This doesn’t affect the gameplay, but it’s an interesting mechanic that adds so much to the slot.

With RTP at 96% and low volatility, this slot is ideal for newcomers to online slots or players who prefer frequent but low wins. The maximum win on this slot is 700x your stake and can be won by activating the highest multiplier of x32.

Esqueleto Explosivo is absolutely bonkers but in the best kind of way. Visually, it looks utterly stunning and sounds fantástico! The gameplay itself is creative with the heads exploding or falling off which really makes the slot feel quite inventive.

Whilst the payout may not be anything to sing about, it’s decent for a low volatility slot with a solid RTP. You’ll have so much fun and hopefully get some decent wins in the process. Therefore, we highly recommend that you check out Esqueleto Explosivo as it’s like anything else we’ve seen before.

Enjoyed Esqueleto Explosivo? Here's a handful of similar slots we think you'll like too. These online slots have been chosen based on features and themes similar to Esqueleto Explosivo. You might also want to check out other Thunderkick slots.