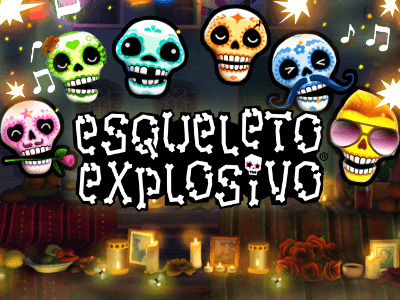 Ever wanted to celebrate The Day of the Dead with an undead Mariachi band? You finally have the chance to do this with Thunderkick's Esqueleto Explosivo series that features Enrico Mortis and his band called The Boners. Each slot comes with vibrant backgrounds, melodic music and some of the most innovative gameplay we've ever seen!

Join the band in Esqueleto Explosivo

The Day of the Dead is a beautiful time in which family and friends gather to celebrate the life of loved ones who are no longer with them. Don't mistake it for a sombre affair as it's full of vibrant colours and melodic music to create a full-on party. In the Esqueleto Explosivo series, Enrico Mortis and his band, The Boners, return to the land of the living to liven it up.

Enrico Mortis is a legend among the mariachi community and he is completely explosivo. He acts as the explosivo wild that destroys symbols surrounding wins to create even bigger wins! The Boners also make an appearance in both slots with each of the members having a unique visual style and melody attached to them - fantástico.

In the first slot, Esqueleto Explosivo, the gameplay is focused on low volatility meaning that wins will be frequent but little. The second slot, Esqueleto Explosivo, turned up the gameplay to high volatility and features a bigger win of 5,000x your stake. Low volatility is ideal for newcomers to slots, whilst high volatility is for high rollers with a bankroll that they can sustain. Ultimately, this series has something for every kind of player!

There's literally something for everyone in this charming game series. Esqueleto Explosivo brings in the beautiful culture of The Day of the Dead and makes something entirely unique to slots. It's fun, bonkers and absolutely stunning at times. If you are going to try a new slot series, Esqueleto Explosivo is one to definitely try out!