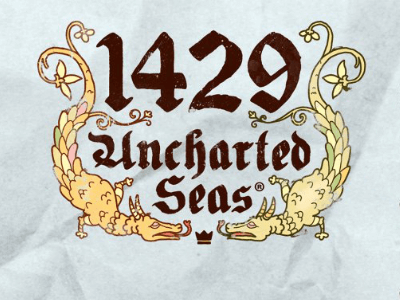 1429 Uncharted Seas is a gorgeous 5-reel, 25 payline mythical-themed slot developed by Thunderkick that boasts two bonus features, an expanding wild that can fill an entire game reel and a free spin bonus feature that can award players up to 50 free spins! With an absolutely mindblowing RTP of 98.50% you'd be absolutely mad not to give this nautical slot a spin or two.

“ This slot looks wonderful and pays out frequently, sadly just not very much! ”

1429 Uncharted Seas has two major bonus features that players can benefit from when playing this low volatility slot, these are expanding wilds and free spins.

The game's wild symbol is a ship sailing along the seas, this substitutes for all symbols except the bonus symbol. This symbol can appear on reels 2, 3 and 4 only and it will expand to fill an entire reel, creating a stack of 3 wild symbols.

If players land 3 or more compass bonus symbols anywhere on the game reels during base gameplay they'll receive free spins. The number of free spins players receive will depend on how many bonus symbols land. 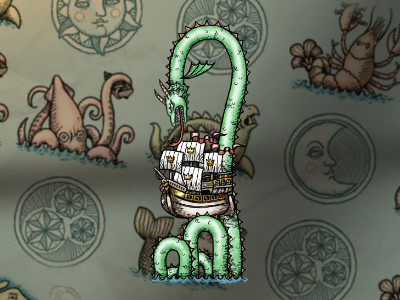 The game's wild symbol is a ship that can only land on reels 2, 3 and 4. When it lands it will expand to fill an entire rele, essentially creating a stack of 3 wild symbols. 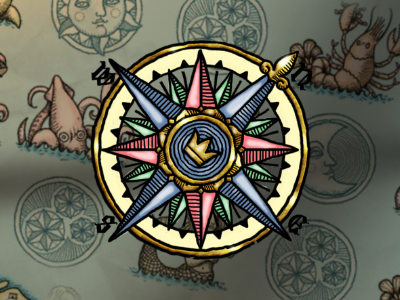 1429 Uncharted Seas is a 5-reel, 25 payline mythical-themed slot developed by Thunderkick. This impressively designed low volatility slot boasts features and mechanics such as expanding wilds and a free spins bonus that can see players pick up 50 free spins in one go!

This nautical-inspired slot, like all Thunderkick games, is absolutely beautifully designed and we genuinely cannot praise it enough. The game was made to look like a hand-drawn 15th-century map that a great adventurer might have used as they set out on the high seas in search of riches, new land and opportunities.

Symbols in this slot are as follows: Stars, the moon, the sun, a sea monster, a giant lobster, a squid, a snapping turtle and a mermaid. The special bonus symbol is a compass whilst the wild symbol is a boat that can expand, revealing a menacing sea creature.

If you really squint and take a good look at the game screen whilst the reels aren't spinning you'll notice that a shadow of a cabin window is being cast upon the map, which moves up and down as the boat sways from left to right, it's a nice little touch.

When players trigger the bonus game players are shown some wonderful art of a boat sailing in a storm and the entire game reels go darker and thunder and lightning strikes inbetween each spin.

When it comes to how this game sounds, it's pretty bland but it does fit the aesthetic. There is a pretty average soundtrack and players can hear the sound of the sea, however, it's not overly exciting.

1429 Uncharted Seas is one of those online slot games that doesn't really look like an online slot game, but that's not particularly a bad thing, it's actually a testament to how well designed this Thunderkick slot is!

First and foremost we have to just say wow... 1429 Uncharted Seas has an RTP of 98.5%, which is absolutely unheard of, this is easily one of the highest RTP's you'll find in any game on Slot Gods. On the other end of the scale, this low volatility slot has a maximum win potential of 670x the player's stake which is pretty disappointing.

This is a unique and beautifully designed slot with generous bonus features and an absolutely fantastic RTP.... That being said we're really struggling to look past that low win potential, it's all good and well bringing us frequent wins (we'll never complain about this!), but we'd really love to pick up a bit more than just 670x our stake!

Enjoyed 1429 Uncharted Seas? Here's a handful of similar slots we think you'll like too. These online slots have been chosen based on features and themes similar to 1429 Uncharted Seas. You might also want to check out other Thunderkick slots.