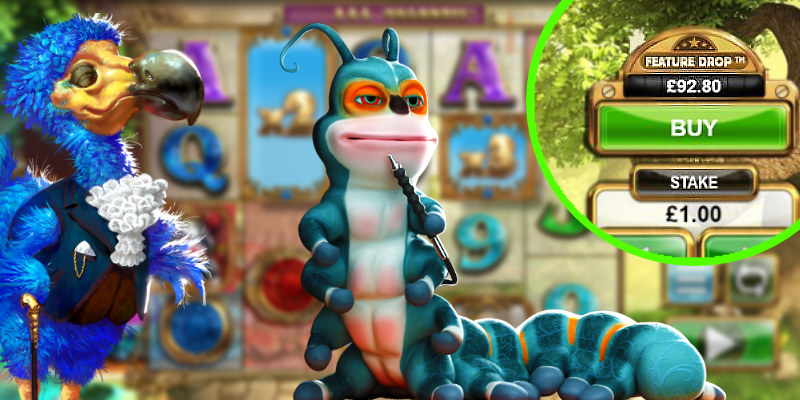 What is the bonus buy mechanic?

Bonus buy (also referred to as 'Feature Buy' or 'Feature Drop') is a game mechanic that allows players to spend a set amount of money to automatically buy their way into a bonus feature on an online slot. This is an alternative to triggering a bonus feature randomly through sustained base gameplay.

The best way to honestly describe a bonus buy is that it's an expensive shortcut that automatically starts a game's bonus feature (such as free spins, a wheel of fortune or a pick and click mini-game). The bonus buy may or may not pay off financially upon being triggered.

It's a common misconception amongst many rookie players that the bonus buy feature will almost always pay out more than the cost of triggering the bonus, but this isn't true... Whilst triggering the bonus usually increases the game's RTP by a percent or two, there's still a chance that the game will not pay out particularly well.

How much does it cost to trigger a bonus buy?

Triggering a bonus often costs around 100x the player's stake (and even more on certain online slots), so if a player is playing a game at £2 a spin and they want to trigger free spins (at that stake) without making base game spins they'll have to to pay £200, which is a huge gamble.

Some players would argue that triggering a bonus buy feature would roughly cost them the same amount of money as they'd have been willing to stake during base gameplay... So triggering is just a means to speed up the overall process.

There are many online slot developers that allow players to utilise the bonus buy mechanic, these include developers such as  NetEnt, iSoftBet, Pragmatic Play, Skywind, Yggdrasil, Quickspin, SG Digital and Relax Gaming (just to name but a few).

However, the most popular online slot developers to utilise the bonus buy mechanic within many of their online slots are Big Time Gaming and Blueprint Gaming who are behind popular games such as White Rabbit Megaways, Extra Chilli, Safari Gold Megaways and Rick and Morty. Megaways

Why was the bonus buy feature banned in the UK?

The concern amongst the UKGC (and those who seek to ban or heavily regulate online gambling) was that rather than playing an online slot as it was intended (with a standard stake on each and every spin), problem gamblers may instead choose to place incredibly large bonus buy bets as high as thousands of pounds on each and every spin.

The bonus bet feature allows players to do just that, and considering they don't always pay off it has the possibility to send some players spiralling out of control, eating up their bankroll (and more) in mere seconds.

Considering this is similar to what players were able to do when playing fixed odds betting terminals in bookies up and down the country, it's no surprise that bonus buys were banned.

Is there an alternative to bonus buy slots for UK players?

Yes, there is an alternative to bonus buy slots for online slot players in the United Kingdom that has only recently been introduced. In July 2021 Relax Gaming released a brand new game called Money Cart 2, this slot is a near replica of the popular slot Money Train 2, which is famed for having an incredibly engaging bonus feature that can be purchased instantly for 100x the player's stake.

Knowing that players within the United Kingdom could not trigger this feature via bonus buy, making the most of the action-packed Money Cart Bonus Feature, Relax Gaming released an entire game that only sees players play the bonus round.

There are no standard spins, no wilds, scatters or any other mechanics. Just spins that either see players win nothing at all or see them trigger the bonus.

The RTP of Money Cart 2 is significantly higher than a standard online slot, so it only takes a small handful of spins before the bonus is triggered. This method of circumventing the Bonus Buy mechanic has proven to be an incredibly smart move and has delighted many online slot enthusiasts.

We can see this sort of unique bonus-led game becoming the norm in the not-so-distant future.