Safari Gold Megaways is a 6-reel, 117,649 ways to win slot developed by Blueprint Gaming. This game has HUGE win potential that can see players win 50,000x their stake. This is thanks to its wheel of fortune style bonus game that gives out up to 40 free spins with a progressive unlimited win multiplier.

Jump straight into the action and play Safari Gold Megaways now at the following fully licenced UK slot sites. These slot sites have been thoroughly audited and reviewed by the team here at Slot Gods to ensure they offer an exceptional user experience, are trustworthy, safe, secure, and boast the best selection of online slots in their portfolio including Safari Gold Megaways...

Safari Gold Megaways is a Megaways slot with a tasty 116,649 ways to win that boasts 2 main bonus features. Firstly, we have the free spins bonus that will see players trigger up to a maximum of 40 free spins with an increasing multiplier up to 10x. In order to trigger the free spins players must land 4, 5, 6 or 7 scatters on the reels.

A wheel of fortune will then come into play that spins and decides how many free spins the player will receive and what multiplier they will start off with at the beginning of the free spins bonus round. 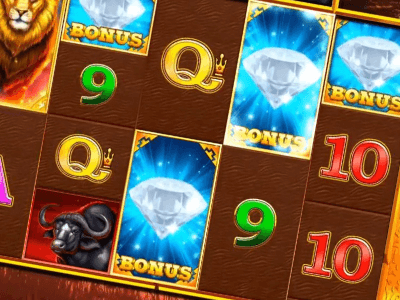 If players land 4 or more diamond scatter symbols on the reels then a wheel of fortune will appear. This will spin, deciding how many free spins the player will receive and what progressive multiplier will be applied. 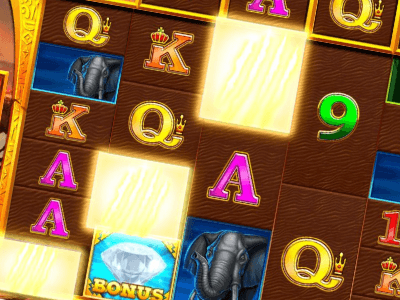 Like many Megaways slots, Safari Gold Megaways features cascading symbols, this sees new symbols fall into place when winning symbols are removed from the game. This can lead to additional wins. 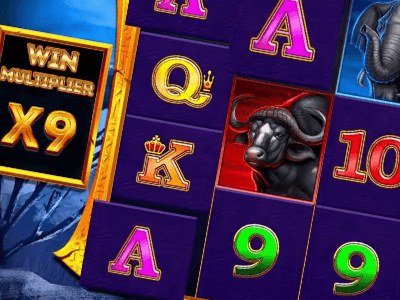 During the free spins bonus round players will see their wins multiply, this win multiplier will increase by +1 on every single spin once the symbols have cascaded.

Safari Gold Megaways is an animal-themed slot released by Blueprint Gaming in 2019, this 117,649 ways to win slot is a re-skin of a Megaways slot designed exclusively for LeoVegas, but such was its popularity that it was re-designed into something casinos across the internet could all enjoy!

Not only does this slot have an incredibly generous maximum win potential of 50,000x their stake, but it's filled to the brim with exciting bonus features and mechanics such as cascading symbols, a bonus wheel and free spins with progressive multipliers attached.

Normally the first thing we'd talk about when analysing the design of a slot is how it looks, but we were most impressed with the soundtrack Safari Gold Megaways boasts. From the moment the game loads in players are greeted with a fantastic upbeat tune that sets the tones and gives players a true traditional-African vibe.

Turning our attention to how this slot looks, personally, we thought the reels were a little bit garish, however with a name like Safari Gold, we suppose there has to be an element of gold somewhere! Behind the gold-trimmed reels is the African savanna.

Low-value symbols are your traditional royal deck, 10, J, Q, K, A. High-value symbols are, as you'd expect, animals you'd find whilst on safari in Africa such as an elephant, cheetah, buffalo and lion. The scatter symbol is a large diamond.

This is your typical Blueprint Gaming slot. Players can access the paytable, game details and change their bet limit (to anything between 0.20 and 10 per spin) on the left-hand side of the game reels. On the opposite side, players can spin the reels manually or set up to 100 autoplay spins.

Safari Gold Megaways shines when it comes to win potential, this high-volatility slot not only offers players the opportunity to win a massive 50,000x their initial stake, but also has an above-average RTP of 96.50%.

As is the case with all high-volatility slots, you should expect to come up against it a little bit when spinning the reels, you might experience a whole host of dead spins, but when you do hit a winning spin it should be more than worth your time.

This re-skin of LeoVegas Megaways was sought after by other operators for good reason, it has a high-winning potential and attractive bonus features. There aren't too many Megaways slots that payout as high as this one, and for that reason alone this game is well worth playing.

Play Safari Gold Megaways now at the following verified UK slots sites. These slot sites are fully licenced and have been thoroughly vetted and reviewed by us to ensure they offer a great user experience, are trustworthy, secure, and have a wide variety of the best online slots in their lobbies including Safari Gold Megaways:-

Enjoyed Safari Gold Megaways? Here's a handful of similar slots we think you'll like too. These online slots have been chosen based on features and themes similar to Safari Gold Megaways. You might also want to check out other Blueprint Gaming slots.