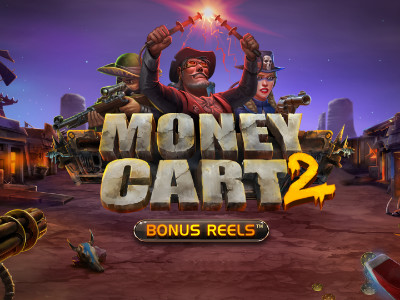 Prepare for high-octane bonus feature gameplay in Money Cart 2 Bonus Reels, the strangest slot spin-off we've ever come across! This 5-reel Relax Gaming slot sees base gameplay ditched in favour of constant bonuses! If you enjoyed Money Train 2's Money Cart feature you'll truly fall in love with this slot that pays homage to just that! With an impressively high RTP sitting at 98% and a maximum winning potential of 5,000x your stake then this slot is at least worth a look in!

Jump straight into the action and play Money Cart 2 now at the following fully licenced UK slot sites. These slot sites have been thoroughly audited and reviewed by the team here at Slot Gods to ensure they offer an exceptional user experience, are trustworthy, safe, secure, and boast the best selection of online slots in their portfolio including Money Cart 2...

“ Truly bizarre high-octane Wild West steampunk, not one to be missed! ”

Money Cart 2 Bonus Reels is a unique slot in the sense that the entire game revolves around a single bonus feature. There are no standard game symbols during base gameplay, just blank spaces and bonus symbols!

When players do manage to land 3 bonus symbols anywhere on the game reels then they'll trigger the Money Cart bonus. The 3 bonus symbols are locked into position and 3 re-spins are awarded. Landing a new bonus symbol on the reels will automatically reset the spins back to 3.

If an entire reel is filled up with bonus symbols then a brand new reel will come into play, this can be done twice. This lucrative feature is known as 'Bonus Reels'.

The value of the bonus symbols will depend upon your stake, standard symbols reveal values between 0.1 and 1x your bet, whilst golden bonus symbols increase that to 0.20 and 20x your bet.

Of course, there's much more to Money Cart 2 than just bonus symbols, there are 11 special symbols that can fall onto the game grid at any given moment during the Money Cart bonus, 9 of which can dramatically alter the course of the feature, these are as follows: 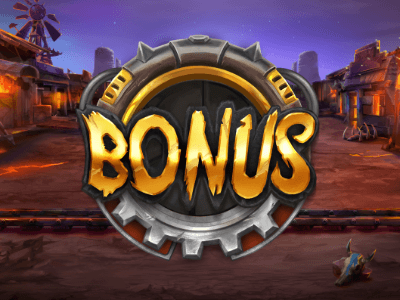 The Bonus symbol will reveal a random value worth between 1 and 10 coins. 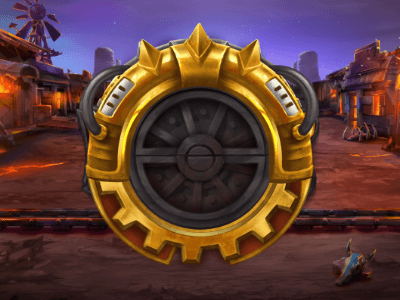 The Golden Bonus symbol will reveal a random value worth between 20 and 200 coins. 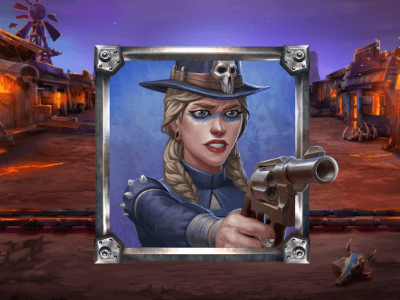 The Payer symbol will reveal a coin value, this value is added it to all other visible symbols on the reels. 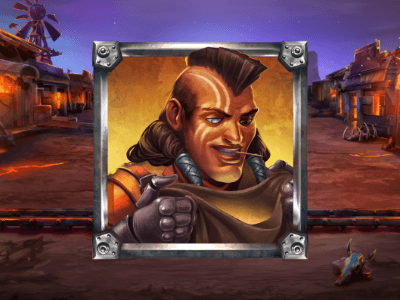 The Collector symbol will reveal a coin value, this collects all other visible values on the reels and will add them to its own. 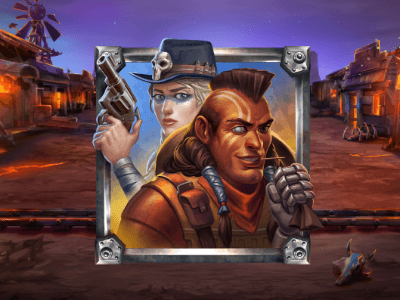 The Collector/Payer symbol will reveal a coin value, it will then be added to the sum of all other visible values to its own. It will then add the new value to all visible symbols on the reels. 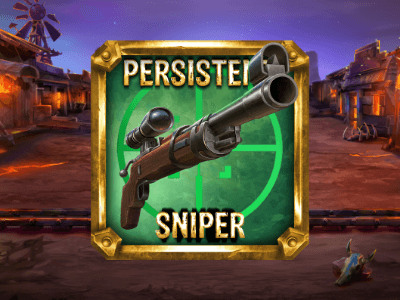 The Sniper symbol will reveal a coin value, doubling the values of between 3 and 8 other bonus symbols. It can also act on the same bonus symbol more than once. 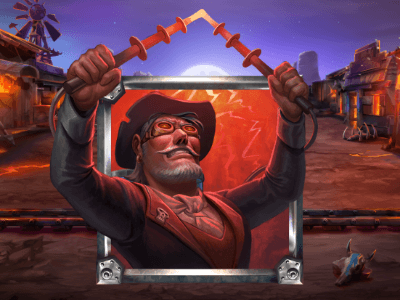 The Necromancer symbol will reveal a coin value, it will then bring between 2 and 7 already used non-persistent bonus symbols to life again (the collector, payer, collector/payer or sniper). 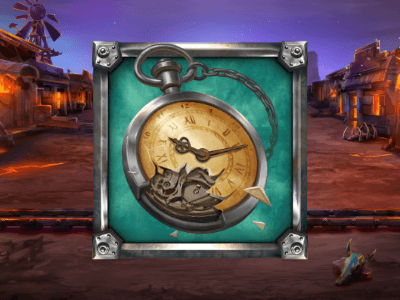 The Reset Plus symbol will reveal a coin value and will increase the starting value of the free spins left by one. 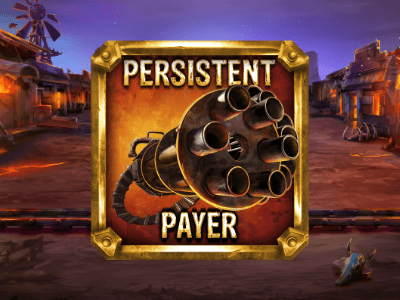 The Persistent Payer symbol will reveal a coin value, it then adds it to all other visible symbols on the reels for that spin and any remaining spins that follow. This symbol does not pay itself.

The Persistent Sniper symbol will reveal a coin value, it then doubles the value of 3 to 8 other bonus symbols.  It can also act on the same bonus symbol more than once. 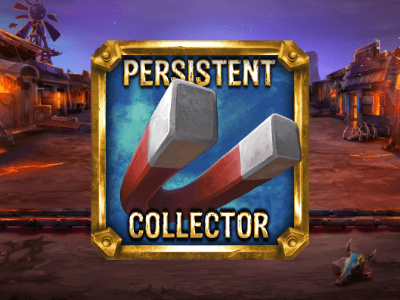 The Persistent Collector symbol will reveal a coin value and then collects all visible values on the reels and adds them to its own value at the end of that spin and every spin that follows. This symbol will not collect its own value.

Imagine taking a single element from your favourite online slot and turning it into an entirely new game. Well, that's exactly what Relax Gaming have gone and done with Money Cart 2! The slot developer has taken the incredibly popular Money Cart Bonus Feature from Money Train 2 and has created this slot that revolves around the entire feature!

If you're someone that truly appreciated the game's lucrative Hold & Spin mechanic that Money Train 2 was so famous for then rejoice, you can enjoy it in all its glory on each and every spin of the reels now! It's a strange experience that we weren't really expecting, but it's a LOT of fun and makes for a unique experience that we didn't think would be as gripping as it was.

We described Money Train 2 as Money Train on steroids, so it only seems fitting that we describe Money Cart 2 as Money Train 2 on steroids, this game is JACKED brother! The game is played on a nasty looking steampunk-inspired train that's covered in rusty metal spikes, dynamite, chains and skulls. It's pretty intimidating. Behind the train (which plays host to the game's reels) is an old Western town at dusk lit by candlelight.

Normally, this is the part of the review where we'd talk about the game symbols, but interestingly this game features only one symbol during base gameplay, and that's the bonus symbol, a metal cog featuring the world BONUS within it. So when you spin the reels either nothing at all will show up or between one and three bonus symbols will.

The symbols that can appear during the Money Cart Bonus feature include bonus symbols, golden bonus symbols, a cowgirl brandishing a pistol, an outlaw carrying a loot bag, a sombrero-wearing Mexican sniper, a crazed scientist wearing goggles, a pocket watch, a mini-gun and a sniper rifle on its own.

The same atmospheric Wild West soundtrack from Money Train 2 plays throughout gameplay, it's pretty slow but it builds a sense of excitement (and dread) that fits the aesthetic of the game perfectly.

Money Cart 2 is essentially a carbon copy of Money Train 2 except for a complete lack of base gameplay it's all very bizarre! The reels still spin horizontally rather than vertically and each symbol is uncovered one by one from the top left corner all the way down to the bottom right hand corner.

The game's bonus feature is triggered when three bonus symbols land on the game reels, this the only time players can win any money from this slot.

When it comes to navigating this slot, everything can be found on the action bar that runs along the bottom of the game reels. Here players can access a hamburger menu that plays host to the bonus info, paytable and game rules and the autoplay button that can see players set an infinite number of automated spins.

This bizarre slot had us in two minds when it comes to win potential... On one hand, the RTP has been massively boosted to 98% in comparison to the original's 96.40%, which needed to happen considering this high volatility slot has no small wins here and there until you actually hit a bonus. On the other hand, the maximum win potential has plummeted from 50,000x your stake to just 5,000x which is bitterly disappointing, however, that's the price you pay to solely enjoy exciting Money Cart bonus action!

Honestly, this game is really unusual, there's no way to explain Money Cart 2 other than truly and utterly strange. Never before have we come across a slot that's not only decided to skip an entire game and jump straight to number 2, but completely skips any form of base gameplay!

That all being said, Money Cart 2 is a LOT of fun, and has a very high RTP! We can see why fans are so keen to play this game, especially YouTubers and slot streamers who always like to be in the thick of the action. If you've always wanted to enjoy some high-octane slot gameplay without having to burn through your bankroll to hit a bonus feature then this is the game for you!

Play Money Cart 2 now at the following verified UK slots sites. These slot sites are fully licenced and have been thoroughly vetted and reviewed by us to ensure they offer a great user experience, are trustworthy, secure, and have a wide variety of the best online slots in their lobbies including Money Cart 2:-

Enjoyed Money Cart 2? Here's a handful of similar slots we think you'll like too. These online slots have been chosen based on features and themes similar to Money Cart 2. You might also want to check out other Relax Gaming slots.