Extra Chilli is a direct follow-up to Wild West themed slot Bonanza Megaways. We're not quite sure why it's such a huge departure from the original title, but either way, it's a fun game well worth a spin! With 117,649 ways to win and a decent free spins round with increasing multipliers, you can't really go wrong.

Jump straight into the action and play Extra Chilli now at the following fully licenced UK slot sites. These slot sites have been thoroughly audited and reviewed by the team here at Slot Gods to ensure they offer an exceptional user experience, are trustworthy, safe, secure, and boast the best selection of online slots in their portfolio including Extra Chilli...

“ A spicy slot that hits all the right flavours ”

Upon landing three scatter symbols (that creates the word ‘HOT’) players will receive 8 free spins, however, they can instead choose to gamble these spins in an attempt to win a total of 12 or 24 free spins instead of 8.

Of course, gambling for free spins comes at a great risk, players can potentially lose all of their spins at once if the spinning wheel lands on a losing segment.

Once you are into the free spins round the unlimited multiplier feature kicks in, which sees wins progressively multiplied by 1x after each and every winning spin. If you land 3 free spin scatters on the main reels during this round you’ll receive additional free spins.

Non-UK players can also take advantage of the game’s Feature Drop that allows them to buy their way to the bonus round immediately, without having to wait for it to occur naturally. 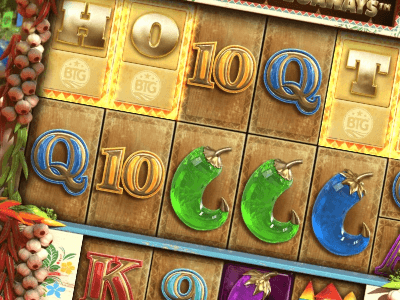 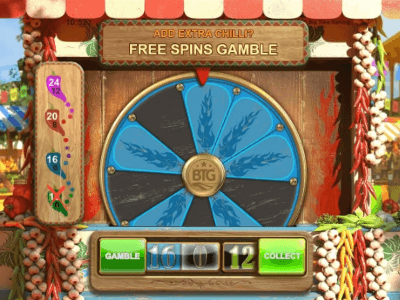 Players can gamble their free spins by spinning a wheel of fortune style wheel. It can either land on 12 free spins, 24 free spins or nothing at all. 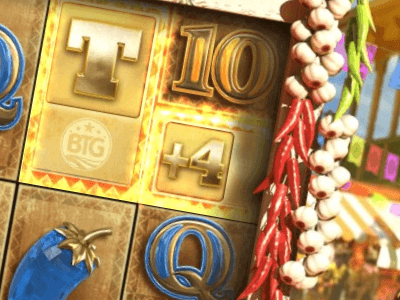 Extra Chilli's free spin round comes with an unlimited multiplier that sees wins multiplied by 1x after each winning spin.

Extra Chilli is an absolutely fantastic Megaways slot that’s a direct sequel to Bonanza Megaways (which might seem a little odd considering the theme).

All of the best features that made its predecessor so great have been retained, whilst a handful of new additions ensure that this hot game is one of the most enjoyable sequels out there.

Extra Chilli is an absolutely gorgeous, vibrant online slot that is awash with colour. The game is set in a beautiful Mexican market that’s filled to the brim with fruit, vegetables, musical instruments and bright bunting.

Why exactly the series has gone from being about mining to chilli peppers is beyond us, but from what we understand the Miner in Bonanza Megaways wanted to make a new life for himself, and selling chillies from a quaint cart in Mexico just worked!

Inbetween spins players can hear the lively chatter of the marketplace as birds tweet and church bells ring. During spins the game plays lively Mariachi music, as you would expect!

There are 6 reels with an additional reel at the bottom of the screen that adds extra symbols to reels two, three, four and five. Each spin sees a random number of symbols (a minimum of 2 and a maximum of 7) land on the reels.

Whenever a win is registered the symbols are removed and new ones fall into place creating what is known as a reaction. All wins are registered from left to right.

As with all Megaways titles, the number of paylines varies dramatically on each and every spin and can reach a maximum of 117,649.

Despite having a higher max win (20,000x your initial stake) and slightly better RTP of 96.82% the win potential in Extra Chilli isn’t quite as impressive as Bonanza. This is because most of your winnings come from the bonus free spin round, and Extra Chilli just doesn’t hand out as many as its predecessor unless you get very lucky with the gamble wheel.

Extra Chilli Megaways is a great slot filled with exciting and innovative features, however, when compared to its predecessor Bonanza Megaways, there really isn’t too much to set them apart. All in all, It’s an enjoyable game, but if you’re expecting a huge improvement on Bonanza then we’re afraid you’re going to go away disappointed.

Play Extra Chilli now at the following verified UK slots sites. These slot sites are fully licenced and have been thoroughly vetted and reviewed by us to ensure they offer a great user experience, are trustworthy, secure, and have a wide variety of the best online slots in their lobbies including Extra Chilli:-

Enjoyed Extra Chilli? Here's a handful of similar slots we think you'll like too. These online slots have been chosen based on features and themes similar to Extra Chilli. You might also want to check out other Big Time Gaming slots.