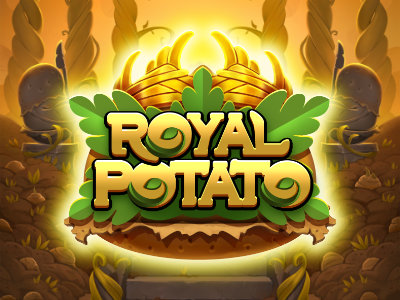 Who knew that deep underneath the earth, there's a hidden society of potatoes with their own royal. Developed by Print Studios through Relax Gaming's client area, Royal Potato is a high volatility slot playing on 5-reels with 30 paylines.

Print Studios' trademark SuperSpinners are back along with free spins with jumbo symbols leading to crazy wins. If you pay your respects to the Royal Potato, you could see wins of up to 30,000x your stake.

Print Studios' trademark SuperSpinners returns that basically gives out multipliers of the amount shown if you land wins throughout them. Alongside this, you have free spins triggered by landing 3, 4 or 5 scatters to award 10, 12 or 14 spins respectively.

The free spins start with a 2x1 symbol in the centre and it grows once you land a certain amount of symbols. It can even expand to fill up the reel for amazing wins. Each King or Queen symbol can reveal a cash prize multiplied by the SuperSpinners. 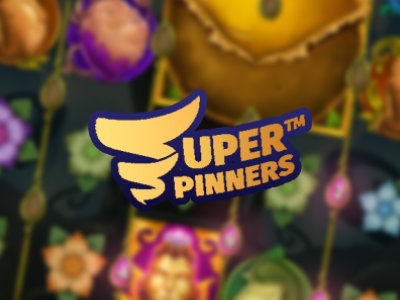 On the screen, you'll find various numbers hidden amongst the reels and these high the SuperSpinners feature. If you land wins through these, you can have the wins multiplied by these. 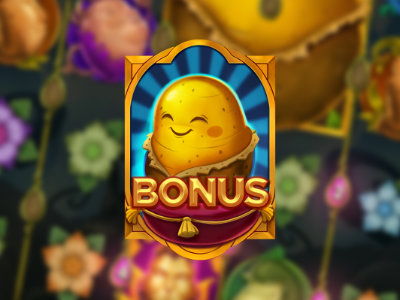 Landing 3 or more scatters will award up to 14 free spins. During this mode, a jumbo potato lands at 2x1 and grows once you land certain combinations.

It may come as a shock to find out that there's a hidden society beneath the surface and it's run by potatoes. In this crazy world, there's a hierarchy that starts with the peasants at the bottom and grows all the way up to the Royal Potato.

Developed by Print Gaming through Relax Gaming's Silver Bullet program, Royal Potato plays on 5-reels with 30 paylines and features SuperSpinners, jumbo symbols and free spins leading to wins of up to 30,000x your stake.

The slot opens up with a grand royal kingdom surrounded by dirt and potatoes. On the reels, there are various potatoes that are absolutely hilarious and show the different hierarchies within the potato world.

To match the visuals, there's a regal score of violins and stringed instruments that you'd expect to find in a kingdom or a royal event. When you spin, you'll hear ambient noises such as the potatoes being watered or soil moving and it all blends well together.

During free spins, you are taken to the throne with my potato subjects with Pachelbel's Canon playing in a remixed song which is just brilliant.

Whilst this slot may seem like every other online slot, the SuperSpinners shake up the gameplay making it more exciting. The jumbo potato is similar to Push Gaming's Fat series, but Print Studios bring their own charm to the mechanic.

Non-UK players will be able to buy free spins and increase the RTP to 97.20%. Despite this, the normal RTP for this slot is 96.31% with a hit rate of 23.33% ultimately meaning that's the chance of hitting a winning combination.

Royal Potato features high volatility gameplay leading to larger wins at a less frequent rate. The biggest win in this slot is 30,000x your stake which can come through the free spins with the jumbo potato and SuperSpinners.

Royal Potato is unbelievable and just so much fun to play. Once you open the slot, you are greeted with a world full of potatoes that you need to navigate around in order to be successful. Who would've thought that potatoes would have a hierarchy?

Not only are the visuals brilliant, but the gameplay and features are wonderful with so many unique mechanics that are just thrilling. If you are wanting a knock-out slot, Royal Potato is the one for you. Keep your eyes 'peeled' for this slot as it's absolutely 'spud-tastic'.

Play Royal Potato now at the following verified online slot sites. These slot sites have been thoroughly audited and reviewed by us to ensure they offer an exceptional user experience, are trustworthy, safe, secure, and boast the best variation of online slots in their portfolio including Royal Potato:-

Enjoyed Royal Potato? Here's a handful of similar slots we think you'll like too. These online slots have been chosen based on features and themes similar to Royal Potato. You might also want to check out other Relax Gaming slots.