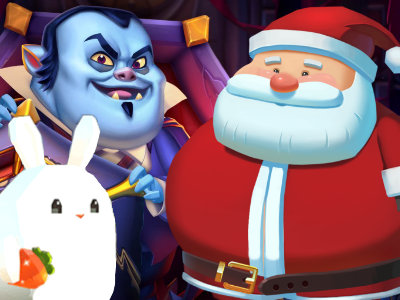 Ever wanted a series that focuses on fat wins? Then Push Gaming's Fat series is definitely a slot for you. Featuring crazy mechanics with symbols that grow larger with symbols reaching up to 6x6 for even bigger wins! Alongside that, you can admire the outstanding design, dynamic gameplay and overall thrilling experience with any of the Fat slots.

Once upon a time, the word ‘fat’ was seen as a negative and derogatory term - but Push Gaming has changed its definition of the term. In the Fat Series, the focus is on a single character that grows in size to deliver fat wins to players.

Originally created in 2018, Fat Rabbit plays on 5-reels with 50 paylines with a focus on a cute little rabbit on a farm. The goal throughout the slot is to steal as many carrots as possible to stick it to the pesky farmer.

Unsurprisingly, Fat Rabbit was such a huge success, that Push Gaming decided to bring out a Christmas themed slot with Fat Santa in late 2018. In a similar fashion to the first game, you have to fatten up Santa with mince pies in order to deliver bigger wins. The developers showed that they could create a Christmas slot with substance and one that could be played during any time of the year.

Almost three years later, Push Gaming decided to bring back the beloved series in the form of Fat Drac. With everyone’s favourite fat feature back, Fat Drac delivered on some extraordinary gameplay and is the best one yet!

The series certainly didn't end there as Push Gaming announced another Fat slot with Fat Banker in 2022. This instalment takes players to the 1920s to see the decadent life of the Fat Banker.

Each game has a special round in which the titular character becomes fatter through consuming certain items. Throughout this round, the character can grow from a small 1x1 to an incredible 5x5 for humongous wins.

Push Gaming is notorious for delivering high-quality slots and this series is no exception. The adorable and cute graphics combined with the amazing soundtrack pair together perfectly for a slot that is of such a high standard.

So, what are you waiting for?

There’s literally no other series like this and you’d be a fool to miss out on. For those that love Christmas, there’s Fat Santa. For those that love Halloween, you’ll find Fat Drac. For those who just want to play the fat mechanic any time of the year, then you have Fat Rabbit. If you want something different and to be transported to the 1920s, then definitely check out Fat Banker.