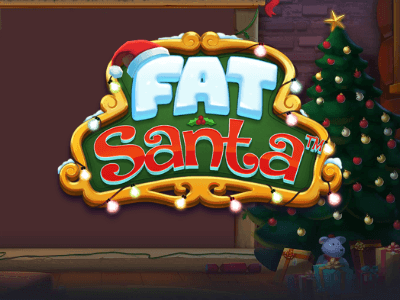 It’s the most wonderful time of the year and Santa is on his way. Sadly, he’s eaten too many mince pies this year and it’s up to you to help him. Go on an unforgettable adventure in the North Pole for a chance to win up to 10,222x your stake.

With wilds and free spins, you’ll be having a Merry Christmas in no time. As an extra gift from Santa, there’s even a high RTP at 96.45%!

Jump straight into the action and play Fat Santa now at the following fully licenced UK slot sites. These slot sites have been thoroughly audited and reviewed by the team here at Slot Gods to ensure they offer an exceptional user experience, are trustworthy, safe, secure, and boast the best selection of online slots in their portfolio including Fat Santa...

Fat Santa is incredibly similar to the Fat Rabbit slot with most of the features carried across but with a Christmas skin instead. There are 3 different wilds that help towards building the free spins with the random Santa’s Sleigh Feature as well.

There is the chance to use a Buy Feature to activate the free spins round by giving up 80x of your current bet level. Note that this may not be available in the UK. During any random spin, you have the option to trigger Santa’s Sleigh Feature. He flies over the reels and leaves Christmas Pies that lock in place as wilds. Any symbols underneath the Christmas Pies will be replaced by Christmas Pies. After the success of Fat Rabbit, Push Gaming decided to create a whole Fat Series dedicated to fat wins and cartoony graphics. Players can expect easy gameplay mixed with satisfying wins. The developers thought that the world needed a Christmas version of this slot that’s all about Santa.

Just like Fat Rabbit, Fat Santa plays on 5-reels with 50 paylines. The entire aesthetic has been changed to fit a more festive feeling to get players in the holiday spirit. Does it add anything to the series or is it just another cloned slot?

There’s no denying that the design is delightful and adorable. You’ll find yourself in the North Pole surrounded by cosy cabins and snow. To make it even better - snow actually falls from the screen to make it feel even more atmospheric.

The slots themselves have similarly designed characters from Fat Rabbit, but shifted to Christmas. You’ll find fat Santa, Elves, Rudolph and Snowmen to fully round out the slot. They have an Animal Crossing and Stardew Valley hybrid mixed in the design which makes it feel softer on the eyes. The club suits in the baubles just adds a little more attention to detail that makes you appreciate the slot a little extra.

Arguably, the most surprising thing about the design has to be the music. It’s Christmas inspired but feels a little funkier. There are soft pianos but mixed with percussion and jazzy beats. It’s not necessarily bad, just unexpected. The reels themselves add a little jingle bell which is welcomed in a Christmas slot.

Honestly, despite having the same layout and features, the design is relatively different. It feels like it’s from the same series but not just a clone with colours changed.

Just like Fat Rabbit, this slot plays on 5-reels with 50 paylines. It’s traditional with spins and wins so there’s nothing to worry about. The gameplay is the furthest thing from complicated and can appeal to all different types of slot players.

Spin, autospin and the bet level can be found underneath the reels. Menus such as sound and pay tables can be found to the left. You can mute specific sounds or just all of it depending on your preference. Autospins can be set at 100 with bets going up to 25.00.

It may come as a shock to find that Fat Santa doesn’t feel like a clone of Fat Rabbit, rather just another title in the series. Sure, the gameplay and features remain almost identical, but the aesthetic and design is vastly different. It keeps consistent within the tone of the series but doesn’t blatantly copy the other game.

The RTP is the same, but the payout is slightly less. This is aimed at more casual players who like a mixture of high and medium volatility level. If you want to play a game full of merriment and Christmas spirit, then Fat Santa is one to try. For those of you wanting a more risqué holiday season, try out Naughty Santa as well.

Play Fat Santa now at the following verified UK slots sites. These slot sites are fully licenced and have been thoroughly vetted and reviewed by us to ensure they offer a great user experience, are trustworthy, secure, and have a wide variety of the best online slots in their lobbies including Fat Santa:-

Enjoyed Fat Santa? Here's a handful of similar slots we think you'll like too. These online slots have been chosen based on features and themes similar to Fat Santa. You might also want to check out other Push Gaming slots.