Rick and Morty Megaways is a 6 reel, 117,649 ways to win slot developed by Blueprint Gaming based on the popular TV show. The game offers 3 different free spin rounds that include wilds, re-spins and expanding multipliers. This truly fantastic branded slot is incredibly lucrative and offers players the opportunity to win up to 50,000x their stake.

“ Genuinely intoxicating and faithful to the bonkers aesthetic of the show ”

First and foremost, Rick and Morty: Megaways is all about the Megaways Mechanic that sees players gifted a massive 117,649 ways to win, as well as the cascading reels that often come bundled with this fantastic game mechanic. But dig a little deeper and you'll come across the game's incredibly generous free spins bonus features.

Rick and Morty: Megaways offers players the choice of 3 different free spin bonus features (each with very different, but lucrative modifiers) and a mystery bonus that sees players play a wheel-of-fortune style mini-game to determine what bonus and how many free spins they'll receive. 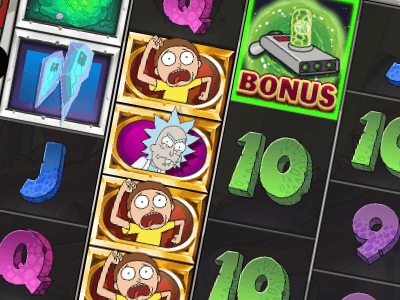 If players successfully land 4 bonus scatter symbols anywhere on the reels then they'll trigger the free spins feature. Players are tasked with picking one of four free spins features, each offering different modifiers. 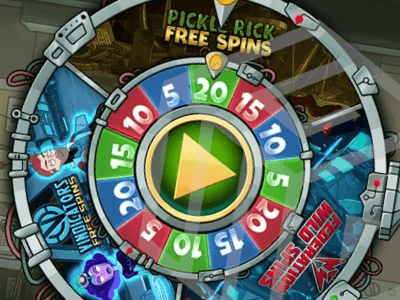 Players have the option to risk a spin of the bonus wheel once the Free Spins round is triggered. This sees a wheel-of-fortune style game kick in that sees players win a random amount of spins, on a random bonus game, with random modifiers.

Rick and Morty: Megaways is the world's first Rick and Morty branded online slot game, and we LOVE it! This wonderfully designed 117,649 ways to win slot features cascading reels, an absolute ton of bonus features and modifiers and a mouth-watering 50,000x maximum win. This game is without a doubt one of the best releases 2020 had to offer! If you're looking for a genuinely good branded slot game then look no further because you've just found it.

Rick and Morty Megaways looks fantastic! The design team at Blueprint Gaming have used the same art-style as the animators behind the show itself, so it's fair to say that this slot really does look the part. The game reels themselves are set up to look like one of Rick Sanchez's inventions, whilst players will spot what looks to be a distant alien planet behind the reels. Both Rick and Morty appear as high-paying symbols (as well as a couple of pieces of space rock. Low paying symbols are your standard suit of cards 9, 10, J, Q, K & A.

In terms of sound, players are treated to quite a strange slow-jazz version of the show's iconic theme tune, at first it's slightly off-putting as it's not what you'd expect... But after a little while playing you do become used to it, and it's not that bad! If you're lucky enough to trigger a bonus then you'll even hear select voice clips from Rick or Morty themselves!

You won't find yourself at any sort of loss when trying to navigate your way around Rick and Morty Megaways, as the game layout follows that of all Blueprint Gaming slots. Players can place their bet (between 0.10 and 10) using a button on the left-hand side of the screen, whilst the spin button is dead opposite on the right-hand side.

Below the spin button is autoplay, which gives players the opportunity to set between 10 and 100 automated spins, so you can sit back and watch the game fold out without having to do anything yourself. In order to do this though you must first set loss and win limits.

Above the spin button is the game settings which include a help page, mute and the all-important paytable. Players can access Blueprint Gaming's Big Win Board by clicking the graph button in the top right-hand corner.

Rick and Morty Megaways has a pretty standard RTP of 96.55% during the base game which actually increases to 97.05% when you head into one of the bonus games, which ultimately makes this game pretty appealing if you ask us. In terms of overall win potential, players can net an impressive 50,000x their initial stake, which is best done playing the Pickle Rick Free Spins feature (thanks to the increasing multipliers that can be utilised during this bonus).

We will happily stand up and state that up until the moment this game's sequel Rick and Morty Wubba Lubba Dub Dub was released, we were confident that Rick and Morty Megaways was undoubtedly the very best branded game going. However, just because it's not number one in our eyes anymore, that doesn't mean it's not worth playing... Trust us, it really is worth a spin!

Rick and Morty Megaways is a prime example of a Megaways slot done extremely well! Not too many Megaways slots offer much in the way of bonus features (if any at all), developers tend to believe that the Megaways mechanic alone can carry their slot, with no need for other features. That said, Blueprint Gaming has truly proven that there's still room for a whole host of epic bonuses and modifiers as well as the famous 117,649 ways to win mechanic.