Rick and Morty Wubba Lubba Dub Dub is a 5-reel, 20 payline slot developed by Blueprint Gaming that boasts no fewer than 15 lucrative bonus features including (but not limited to) stacked and colossal wilds, guaranteed winning spins, mystery symbols and free spins. This slot also offers players the opportunity to win 50,000x their stake!

“ Get schwifty with over 15 modifiers and features! ”

Jump straight into the action and play Rick and Morty Wubba Lubba Dub Dub now at the following fully licenced UK slot sites. These slot sites have been thoroughly audited and reviewed by the team here at Slot Gods to ensure they offer an exceptional user experience, are trustworthy, safe, secure, and boast the best selection of online slots in their portfolio including Rick and Morty Wubba Lubba Dub Dub...

If there's one we can say about Blueprint Gaming, it's that they really do not mess around when it comes to filling their online slots with exciting bonus features, mechanics and modifiers. Rick and Morty Wubba Lubba Dub Dub is filled to the brim with no fewer than 15 in total. We can absolutely assure you that at no point will this game become boring considering there are so many different features and modifiers to play and master.

Pickle Rick Power Spin features are smaller bonus features and modifiers that can be triggered randomly at any time during the base game, often leading to big wins for the player.

Wubba Lubba Dub Dub bonus features are bonuses that are triggered when three scatter symbols land anywhere on the reels. After a short animation players will receive one of the following at random: 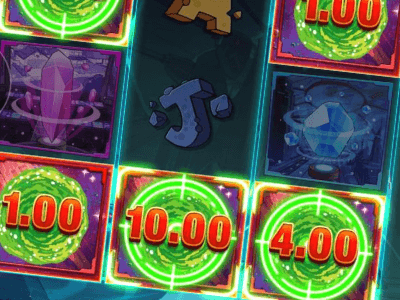 Rick will occasionally blow up losing symbols, in turn causing a cascade. Cascades will continue indefinitely until a winning combination of symbols has been formed. 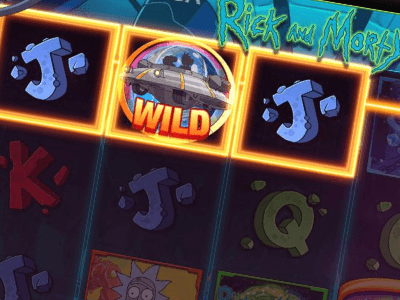 Rick will occasionally remove an entire row of symbols from the reels following an unsuccessful spin of the reels. New symbols will fall into place forming a winning payline. 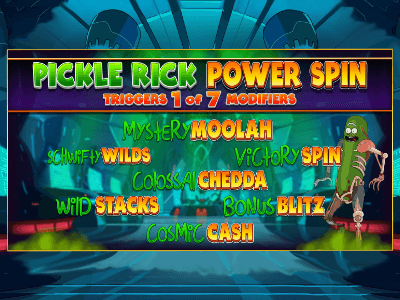 Pickle Rick Power Spin features are a set of bonus features that randomly trigger during base gameplay, these features bring modifiers into play such as multipliers and symbol size. 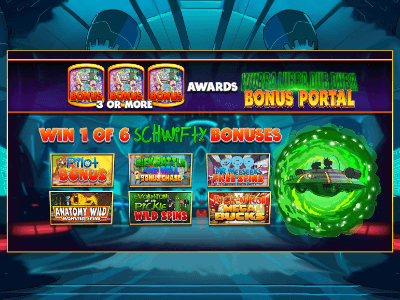 Landing 3 bonus symbols anywhere on the reels will kick start the Wubba Lubba Dub Dub Bonus Features. You'll be randomly awarded one of 6 free spins features, however, if you don't like what you get you can gamble for another.

Rick and Morty Wubba Lubba Dub Dub is the second release in a series of fantastic branded slots from veteran iGaming developers Blueprint Gaming based on Dan Harmon's famous adult-cartoon Rick and Morty.

This medium volatility 5-reel, 20 payline slot has an RTP of 96.11% and a very healthy maximum win potential of 50,000x your initial stake. Combine all of the above with an incredible number of bonus features and mechanics (14 in total!) then we think you'll find this slot is amongst one of the very best modern slots released in recent years.

Rick and Morty Wubba Lubba Dub Dub heavily resembles its predecessor Rick and Morty Megaways, the game is stylized to look like the popular show as closely as it possibly can.

High-paying symbols feature both of the show's main characters Rick and Morty, as well as a couple of precious space-gems. Low paying symbols are your standard J, Q, K & A. Behind the reels you can see what we can only assume to be Rick Sanchez's secret underground laboratory that's underneath the Smith family's garage.

One thing we really liked about the design of Rick and Morty Wubba Lubba Dub Dub was the fact that the autospin button is placed on Rick's famous portal gun, however, whether this was done intentionally, or it's just pure luck that the button landed atop of the iconic tool remains to be seen.

In terms of sound, we're treated to a strange slow-paced jazz version of the TV show's theme tune. What's more, there are even a small handful of voice clips from the real voice actors themselves that play during bonus rounds, which is something that always boosts the profile of a TV/Movie themed online slots in our eyes.

The layout of Rick and Morty Wubba Lubba Dub Dub is pretty standard as far as Blueprint Gaming slots go. Players can change their bet value (between 0.10 and 100) on the left-hand side of the reels, whilst the spin button is directly opposite on the right-hand side.

As mentioned earlier on the review, the game's autoplay is handily placed atop Rick Sanchez's portal gun in the bottom right-hand corner of the game screen. Players can access Blueprint Gaming's Big Win Board by clicking the graph button in the top right-hand corner.

The win potential with Rick and Morty Wubba Lubba Dub Dub is HUGE! This slot offers players the chance to win a very sizeable 50,000x their initial stake. Combine this with a fair RTP of 96.11% and you'll quickly realise that this is actually a very impressive online slot that could quite easily prove to be incredibly lucrative with a little bit of luck.

It's impossible to even consider turning our nose up at a slot that not only has 14 different bonus mechanics and modifiers. but also offers players the opportunity to win a MASSIVE 50,000x their initial stake with just one lucky spin of the reels!

This slot is without a shadow of a doubt one of the best games based on a television show that we've ever had the pleasure of playing, and we genuinely can't wait to see what Blueprint Gaming come up with next after one-upping themselves with this second Ricky and Morty-inspired slot.