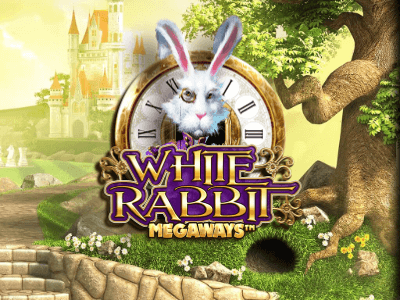 Based on Lewis Carroll's Alice stories, White Rabbit Megaways is a 5-reel slot with up to 248, 832 ways to win! This Megaways slot can give players the chance to win up to 13,000x their stake.

With a fantastic RTP at 97.77% and loads of features, White Rabbit Megaways is a highly recommended slot that you most definitely want to be late for.

“ Clearly one of the best Alice in Wonderland slots that just ticks all the boxes! ”

Naturally, White Rabbit Megaways has the staples of wilds and scatters. They act just like in any other slot with the wild substituting all symbols except the scatter and the scatter triggers the free spins round.

If all else fails in your playthrough, you can buy features through the Feature Drop. You can buy certain features with the feature occasionally being given away for free if the prize is reduced to zero. Of course, this may not be available in every territory, so check first.

During the base game, the Caterpillar adds up to 4 bonus wild symbols onto the screen. These bonus wilds increase the wins by x2 or x3 and substitute all other symbols except the scatter and feature drop symbols.

If you manage to land scatter symbols on reels 2, 3 and 4, then you'll trigger the free spins feature. You'll start with 15 free spins!

Extra symbols can be added to the reels during a feature which increases the ways to win. Each time a cupcake symbol land, it's replaced by two symbols with the number of symbols increasing in that reel by one!

The White Rabbit is a famous fictional character from the Lewis Carrol Alice series. Appearing at the beginning of the book, he leads Alice to the wondrous Wonderland and is later seen as a servant to the King and Queen of Hearts.

Big Time Gaming decided that that White Rabbit needed his own slot with a Megaways makeover - thus White Rabbit Megaways was born. The slot plays on 5-reels with gives players the potential to expand the ways to win to 248,832!

All familiar characters feature in this slot such as the Mad Hatter, Cheshire Cat, Tweedledee, Tweedledum, Alice, Red Queen, Dodo and of course the White Rabbit. It must be noted that they look heavily inspired by Tim Burton's Alice in Wonderland as faces are distorted with bright costumes and makeup. This isn't to say it's a bad thing - but it's a clear inspiration for the design.

The background of the reels features Wonderland with a variety of mushrooms, trees and most importantly rabbit holes. However, during free spins, you are transported to the rabbit hole and are constantly falling which looks brilliant!

It should be noted that the Caterpillar is to the left of the reels and only really moves unless it's his feature. To make it even better, the reels themselves have a beautiful pattern underneath that looks straight from the book itself.

Throughout spins, you'll notice sounds of birds and general ambient noises throughout the forest. The music played throughout involves harps, violins and other soft instruments to create something magical. It becomes more intense as you spin with a faster score to build up the excitement.

It's pretty standard gameplay throughout with the other exception being the reels expanding throughout just like in most Megaways slots. Other than that, it's relatively straightforward.

Any sort of menu you could want can be found to the right of the reels. The spin button, autospin, bet level and feature drop can be found here along with settings.

By expanding the reels and paylines to the maximum amount, you can win up to 13,000x your stake. This can be won by the Caterpillar landing a multiplier of x3 on the reels along with wilds on the reels.

Of course, this slot is a medium to high volatility slot with a phenomenal RTP of 97.77%!

Surprisingly, White Rabbit Megaways is loads of fun to play and just ticks all the right boxes. It has various features that can excite the player along with a brilliant design that just looks fantastic.

The win potential is more than enough with RTP at a high 97.77%! Of course, we'd ideally prefer a higher payout but it's a decent amount will some favourable wins.

If you are a fan of Megaways or Alice in Wonderland, this slot is one not to miss out on. Make sure you give it a spin and check out the slot for a chance to win up to 13,000x your stake!