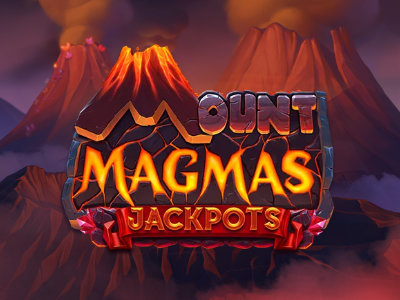 Things really hot up when playing Mount Magma, a fantastic Volcano-themed slot developed by Push Gaming. This 5-reel title not only features an eleven-tiered pick and click mini-game instead of free spins, but also two highly lucrative progressive jackpots. So if a maximum win of 20,450x your stake wasn't enough then one of the two jackpots will be!

One notable emission from Mount Magma is any sort of free spins feature, but not all games require free spins to be fun! This slot revolves around the Volcano Bonus feature that sees players work their way up a volcano picking up instant wins on the way to a potentially big payout.

If a  magma rock lands anywhere on the game reels then it will travel into the volcano and is collected, leaving a wild symbol behind in its place. Magma rocks can trigger the Volcano Bonus.

Whenever a magma rock is sent into one of the depths of the volcano there's a chance the Volcano Bonus feature will be activated.

When triggered players first find out what the top prize will be (up to a maximum of 20450x), they're then taken to a new game screen in which they must play a pick and click mini-game and work their way up 11 rows of tiles.

Each tile players click will either reveal one of the following: An instant prize, an arrow that moves them up a row or a game over symbol. If players can work their way to the very top of the volcano then they will win the largest prize available to them.

At any time players can randomly trigger the Daily Jackpot that's guaranteed to pay out within a certain amount of time according to a jackpot counter that ticks down.

At any time players can randomly trigger the Mega Jackpot that will pay out before it reaches a predetermined value. 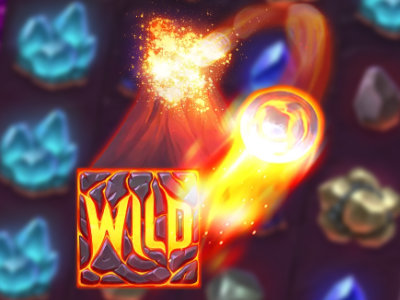 If a Magma Rock lands on the reels then it'll turn into a wild symbol and potentially trigger the Volcano Bonus. 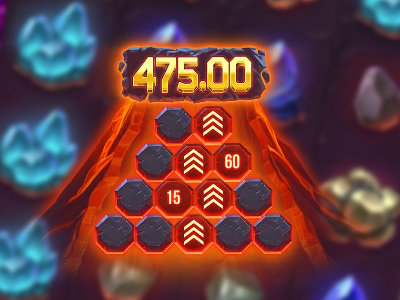 The Volcano Bonus is a pick and click mini-game that sees players work their way up an 11-row volcano by picking blocks on each row, reach the top and they'll win a significant cash prize. 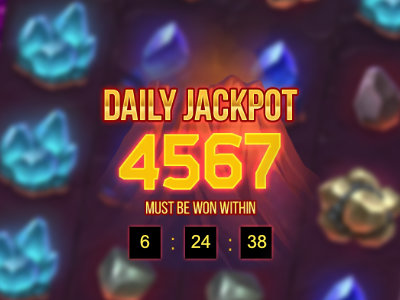 Players can randomly trigger a progressive Daily Jackpot on any spin of the reels. 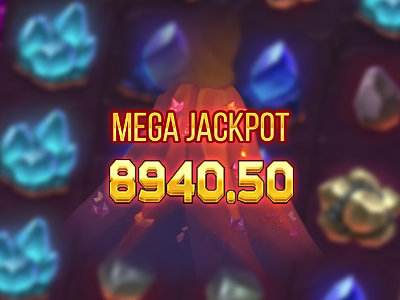 Players can randomly trigger a progressive Mega Jackpot on any spin of the reels.

Mount Magma is a thunderous 5-reel, 10 payline Push Gaming slot that's all about the Volcano Bonus feature that sees players play a unique pick and click mini-game that sees them work their way up a volcano in the hope of winning massive prizes as high as 20,450x the player's stake. If that wasn't quite enough players can also get their hands on not one, but two progressive jackpots, a Daily Jackpot and a Mega Jackpot.

Mount Magma, as you would assume from the name is set at the base of a pair of erupting volcanos that are shooting our molten lava and smoke at an alarming pace. The rock-formed reels feature various rocks and gemstones you might find deep underground.

We don't say it too often, but we'd recommend playing this slot with headphones in. Not because the soundtrack is incredible, but because of the overall ambience. Listen carefully and you'll hear the rumble of the ground, bubbling red hot lava and crackling of fire. In terms of the actual music, a slow and suspenseful drum beat plays ominously throughout base gameplay.

At first glance it's easy to mistake Mount Magma for a cluster pays slot, as the lack of defined reels makes it look so, however, this is actually a very straightforward 5-reel, 10 payline slot.

An action bar runs across the bottom of the game reels, where players can access a game menu, change their total bet, set up to 100 automated spins and of course spin the reels manually.

This medium volatility slot is quite inviting! It has an RTP of 96.50% and a maximum win potential of 20,450x the player's stake.

Mount Magma is genuinely a lot of fun! We weren't entirely sure how we'd feel when we saw that the bonus feature is randomly triggered, as we do enjoy that feeling of getting close by landing scatters! But truth be told, it was absolutely fine!

It's not groundbreaking in terms of design, but the Volcano Bonus was genuinely one-of-a-kind and we had a LOT of fun playing it... In addition to this, it's always nice to see games feature a local progressive jackpot.

Play Mount Magmas now at the following verified online slot sites. These slot sites have been thoroughly audited and reviewed by us to ensure they offer an exceptional user experience, are trustworthy, safe, secure, and boast the best variation of online slots in their portfolio including Mount Magmas:-

Enjoyed Mount Magmas? Here's a handful of similar slots we think you'll like too. These online slots have been chosen based on features and themes similar to Mount Magmas. You might also want to check out other Push Gaming slots.