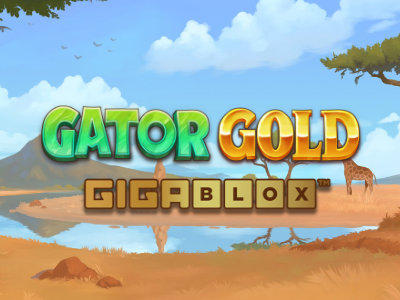 Gator Gold Gigablox is a high volatility 6-reel, 4069 ways to win slot that features the iconic Gigablox mechanic that sees giant symbols land on the reels after every single spin. Players can win up to 20,000x their stake by way of a free spins feature that sees multiplier wilds land during the bonus.

“ There are much better Gigablox slots out there, but it's still worth a spin ”

We'll be honest, Gator Gold Gigablox isn't particularly filled to the brim with bonus features or innovative mechanics but it's still an enjoyable game! Other than the obvious Gigablox mechanic, players can enjoy free spins with multiplier wilds.

During the Free Spins feature Multiplier Wilds can land on the reels. If these symbols form part of a winning payline then they'll multiply the overall win by 2x or 3x. 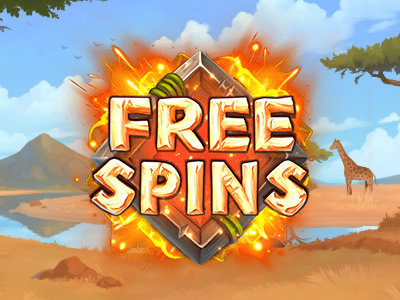 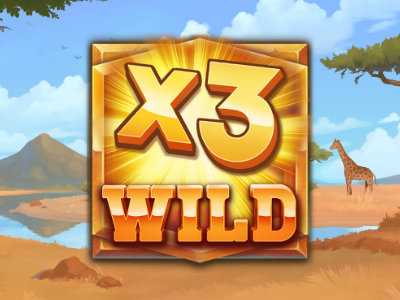 During free spins players can land multiplier wilds, if they form part of a winning payline they can multiply the win by 2x or 3x, depending on which multiplier wild symbol lands.

This is pretty much your typical animal-themed slot, the reels are set upon intricately carved signage in front of a watering hole in the African savanna. Symbols that feature on the game reels are 9, 10, J, Q, K and A. High paying symbols include a zebra, meerkat, buffalo, cheetah and of course a golden alligator. The game's special symbols are golden squares that feature the words 'GATOR GOLD WILD', '2x WILD' and '3x WILD'. The Free Spins symbol is a bronze block that has foliage growing out of it.

In terms of sound, Gator Gold Gigablox features atmospheric traditional djembe music accompanied by singing. It all feels very authentic and is arguably the best thing about the overall design of this slot.

Players win by landing at least 3 identical symbols on 3 consecutive leftmost reels... That being said, if a Golden Gator symbol lands on the game reels then it will payout from just 2 symbols! On every spin of the reels at least one guaranteed Gigablox symbol will land.

Navigating the slot is straightforward as everything can be found on an action bar at the bottom of the game reels. This action bar features stake selection buttons, a max bet button, spin and autospin. If players press the purple + button on the far left-hand side of the game screen then they'll open an expanding menu that features the paytable, game settings, game rules and sound settings.

This high volatility slot has an RTP of 96% and can see players win a total of 20,000x their stake (which is a staggering 1,200,000 if played at the maximum stake of 60.00). The best way of getting your hands on this big win is by triggering the free spins feature and landing several 3x wilds on the reels.

Gator Gold Gigablox certainly isn't the most exciting of Gigablox slots, however, the win potential is there and the game can offer players huge prizes if the conditions are right.

Enjoyed Gator Gold Gigablox? Here's a handful of similar slots we think you'll like too. These online slots have been chosen based on features and themes similar to Gator Gold Gigablox. You might also want to check out other Yggdrasil slots.