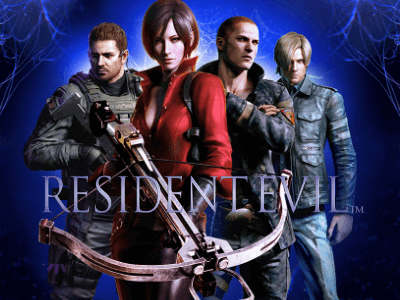 Based on the legendary series by Capcom, Resident Evil 6 gives fans the chance to win money whilst saving the world with their favourite heroes. It’s up to you, Chris, Ada, Leon and Jake to stop the world from turning into zombies.

Just like in the games, green herbs can be valuable in giving you cash prizes or power up for the next 3 spins. You can shoot up zombies with Leon’s Sticky Wild Zombies and crack codes for multipliers in Ada’s Mission: Monster Hunt Bonus.

Jump straight into the action and play Resident Evil 6 now at the following fully licenced UK slot sites. These slot sites have been thoroughly audited and reviewed by the team here at Slot Gods to ensure they offer an exceptional user experience, are trustworthy, safe, secure, and boast the best selection of online slots in their portfolio including Resident Evil 6...

The main draw to this slot has to be the green herbs powering up slots in order to give characters their special abilities. After reel 3 has been powered up, either Chris, Ada, Leon or Jake can land to give even bigger bonuses including free spins and expanding wilds.

Landing the full scatter on reel 3 will trigger a power up for the next 3 spins. If you manage to land a stacked characters symbols on the reels after this, you activate their specific bonus features.

This lady in red can give you a 4-level bonus game provided that you land her on a powered up reel 3. You join Ada in cracking the entry code and have up to 6 picks to match 3 green lights. It may award a multiplier of up to 5x.

Just like Ada, Chris can provide you with extra help if he lands on a powered up reel 3. He’ll come rappelling down to create 2 expanding wilds before every free spin.

Now landing Jake on a powered up reel 3 will leave to 6 free spins. Before each free spin, Jake will fight the terrifying Ustanak and add 2 to 5 random wilds onto the reels.

Similarly to Jake, Leon can provide 6 free spins for landing his symbol on a powered up reel 3. During the round, Leon will shoot a zombie to create 2 to 5 sticky wilds that will remain in place until free spins ends.

It’s no surprise that they would have turned one of their titles into a slot game in order to give fans an even bigger taste of Resident Evil. Developed by Skywind and based on the Capcom series, Resident Evil 6 slot is all about saving the world whilst trying to win some cash prizes as well. Enter the world of survival horror.

As you open up the slot, you’ll get the opening cinematic from the Resident Evil 6 video game itself to get you in the right mood for the slot. You’ll notice that the slot seems to have a border stylised with the design of Resident Evil 6, it looks as if it’s optimised for mobiles. It can be a little jarring for people on desktops but it’s playable.

The top of the reels features a still from the game with certain lights highlighted to create a more animated feeling. It’ll come to no surprise that the 4 main characters of Resident Evil 6 are key figures on the reels. They each come with their own abilities and are literally taken from the game itself. Chris Redfield, Leon S. Kennedy, Ada Wong and Jake Muller are all big features in this slot.

It’s a little disappointing to find out that Sherry Birkin, Helena Harper and Piers Nivan are missing from the slot entirely despite these characters being mains as well. Perhaps if Skywind included these in somewhere, it’d feel even better.

Between spins you’ll find Resident Evil 6 theme music playing between spins and eerie sounds to create a terrifying atmosphere for the slot. Honestly, the design is brilliant for the slot but is let down by the optimisation for mobiles and tablets.

It’s completely traditional in the sense of gameplay with 5-reels and 25 paylines. All you do is to match the symbols in order to win extra bonus rounds and cash prizes. The spin button, autospin and turbo button can be found to the bottom right of the reels. Note that the turbo button may not be available in the UK. The paytable and game rules can be found at the top left with other settings being available at the bottom right of the screen.

As expected for a slot based on a video game, Resident Evil 6 slot is a high volatility slot. The RTP is at a reasonable 95.09% which is about the average for an online slot. Perhaps, the biggest letdown is the base payout of 3,000x your stake by landing wilds on all 5 reels. You can win other payouts such as 1,500x your stake with 5 of a kind Ada symbols and 750x your stake for 5 Chris symbols.

Perhaps one of the most inventive branded slots for a video game. It has 4 of the main characters from the slot game and uses visuals from the game to make it feel more than just a cash grab. What is disappointing is that they’ve ignored the other protagonists and this may put some Resident Evil fans off.

The biggest let down has to be the maximum win of 3,000x your stake, which feels a little low for a high volatility game. Despite this, it’s an inventive and fun enough slot that most players will enjoy this. If you love Resident Evil games or just horror slots in general, then you should definitely check this one out. For the best experience, try this out on mobile.

Play Resident Evil 6 now at the following verified UK slots sites. These slot sites are fully licenced and have been thoroughly vetted and reviewed by us to ensure they offer a great user experience, are trustworthy, secure, and have a wide variety of the best online slots in their lobbies including Resident Evil 6:-

Enjoyed Resident Evil 6? Here's a handful of similar slots we think you'll like too. These online slots have been chosen based on features and themes similar to Resident Evil 6. You might also want to check out other Skywind slots.