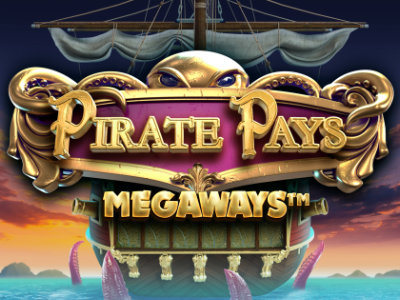 Pirate Pays Megaways is a 6-reel, 117,649 ways to win Megaways slot developed by Big Time Gaming. This epic game boasts Compass Wilds, a Deal or no Deal-style Kraken Bonus Round and Free Spins feature with huge increasing win multipliers. If you're looking for a generous slot look no further, this high volatility game can see players win 104,400x their stake.

“ Cool bonus features and mechanics, big payouts... What's not to like? ”

Jump straight into the action and play Pirate Pays Megaways now at the following fully licenced UK slot sites. These slot sites have been thoroughly audited and reviewed by the team here at Slot Gods to ensure they offer an exceptional user experience, are trustworthy, safe, secure, and boast the best selection of online slots in their portfolio including Pirate Pays Megaways...

Big Time Gaming has made some pretty intricate new online slots in the last few years, we'd say that Pirate Pays Megaways is amongst them. It's not filled to the brim with features, nor is it overly confusing, but it does have some excellent bonus features and mechanics that we've not seen crop up in a Big Time slot before.

This 6-reel slot can see special Wild Compass symbols land on the extra reel, turning every symbol along a reel into special bird wilds. In addition to this, there's a Kraken Bonus Round which sees players take part in a Deal or no Deal-style mini-game before they're taken into the free spins bonus itself.

A Wild Compass symbol can land on the extra game reel at any time during base gameplay and the Kraken Bonus Round. The wild compass will spin and eventually reveal a direction (north, east, south or west), wild bird scatter symbols will spread in whichever direction the compass is pointing, covering the entire reel.

If 3 or more scatter symbols land anywhere on the game reels then the Kraken Bonus Round will be triggered.

Players will be sent to play a Deal or No Deal style game in which there are 20 different free spin outcomes. Canons are fired and up to five of the free spin outcomes are removed from the game screen. Players are then given a free spin offer which will be a set number of free spins and a set starting multiplier.

Players can either accept the offer or risk it and see another five choices removed from the game, in the hope that one of the top offers remains on the board until the end. When only two outcomes remain players must pick one of two chests.

Once this round has been completed players are taken through to a standard free spins bonus round.

If the third scatter symbol on reel 6 is a purple treasure chest then the enhanced Kraken Bonus Round will be triggered.

This sees players go through the exact same process as the Kraken Bonus Round except that ten of the lower free spin outcomes are removed from the mini-game so that only the higher value options are available. 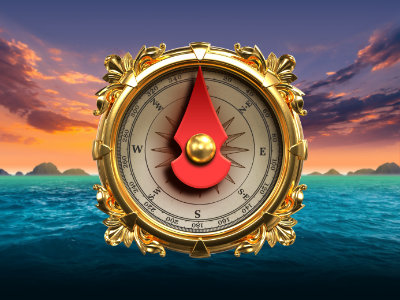 Wild Compass symbols can land on the game's extra wheel. The compass will spin and wild bird scatter symbols will replace all of the symbols that are in the direction of the compass needle. 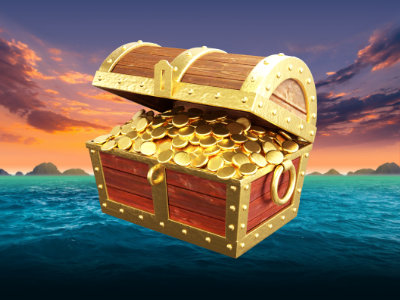 Upon landing 3 scatter symbols anywhere on the game reels players will be taken to a Deal or no Deal-style mini-game in which their free spins and win multiplier is selected. Upon completion of this game players start their free spins.

Pirate Pays Megaways is the latest pirate-themed slot from Big Time Gaming, the Australian developer famed for their unique Megaways slots. This 6-reel, 117,649 ways to win slot boasts a unique Wild Compass feature that sees a compass symbol spin before special bird wilds cover the reel in whatever direction the compass is pointing. Players can win the game's eye-watering maximum prize of 104,400x their stake by way of an epic Kraken Bonus Round that sees players win free spins with huge win multipliers.

Pirates Pays Megaways is a fairly well-designed Megaways slot that sees the reels set into a grand pirate ship that cuts through the ocean waves at pace, making its way towards hidden treasure on a distant island. All in all, this slot looks pretty easy on the eye, however, no matter how realistic the ocean looks, we have to say the animation around the bottom of the boat seems a little bit clunky.

In terms of symbols, low paying symbols are your standard Big Time Gaming 10, J, Q, K, A whilst high paying symbols are green, red, blue and purple jewels. Special symbols include a compass wild, parrot wild and a treasure chest for the scatter symbol.

One thing that really bugged us throughout the duration of our gameplay was the soundtrack. Maybe it's because we played an early access version of the slot and it wasn't completely polished, but every single time we span the reels using the autospin feature the music reset completely, it made for an agonising audio experience which is such a shame because it's clear a lot of time went into making this slot look good.

On a side note related to the game's audio, we also recognised some audio that had been pulled directly from Who Wants to be a Millionaire Megaways, it's no biggie as many developers utilise assets from older games, but this was quite evident here.

It's a strange game when it comes to design because, on one hand, we're genuinely impressed with how it looks, but on the other hand, it's doesn't really give off any pirate vibes at all. The ship more looks like an expensive galleon utilised by the Spanish Armada or English Navy. Rename this slot naval pays and they might have stood a bit more of a chance with us (even though the name isn't nearly as catchy).

This slot is your stereotypical Big Time Gaming slot. It features 6-reels and an additional horizontal reel that runs across the bottom of the game screen, it's this additional reel that adds an extra symbol to reels 2, 3, 4 and 5.

All of the buttons used to play this slot are found on the right-hand side of the reels, if you've ever played a Big Time Gaming slot before you'll know exactly where to find everything.

This high volatility slot has an RTP of 96.23% absolutely eyewatering maximum win, seeing players win up to 104,400x their stake.

Maybe it's down to poor luck, but we found Pirate Pays Megaways to be a bit of a slog, we span the reels for over 35 minutes, racking up more than 400 spins before we managed to trigger the Kraken Bonus Round.

Despite some glaring issues in terms of design, this slot is seriously cool... We're big fans of the Wild Compass symbols and Kraken Bonus Round... With 104,400x stake on offer, how can we possibly say no to this pirate-themed slot!

Play Pirate Pays Megaways now at the following verified UK slots sites. These slot sites are fully licenced and have been thoroughly vetted and reviewed by us to ensure they offer a great user experience, are trustworthy, secure, and have a wide variety of the best online slots in their lobbies including Pirate Pays Megaways:-

Enjoyed Pirate Pays Megaways? Here's a handful of similar slots we think you'll like too. These online slots have been chosen based on features and themes similar to Pirate Pays Megaways. You might also want to check out other Big Time Gaming slots.