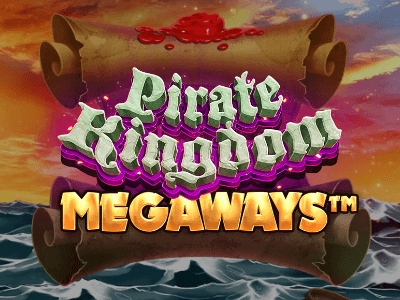 The slot features free spins, tumbling symbols and X2 wilds appearing during regular spins to assist you in your playthrough.

“ Megaways and pirates are a winning combination! ”

Jump straight into the action and play Pirate Kingdom Megaways now at the following fully licenced UK slot sites. These slot sites have been thoroughly audited and reviewed by the team here at Slot Gods to ensure they offer an exceptional user experience, are trustworthy, safe, secure, and boast the best selection of online slots in their portfolio including Pirate Kingdom Megaways...

Ultimately, the biggest addition to this slot has to be the Megaways engine. You can increase your chances of winning by opening up the win lines fully to 117,649. Pirate Kingdom Megaways also contains a tumble mechanic in which winning symbols disappear with new ones dropping to replace the reels.

There's a standard wild symbol that is 2 pistols and replaces all symbols. However, there is also another wild symbol which is a x2 symbol that appears on reels 2 to 6. When 2 or more of these land on the same spin, the multiplier values are combined.

If you get 4 consecutive tumbles, then free spins will be triggered. It begins with 8 free spins, with each additional tumble giving you 2 more free spins with a maximum of 14. Any reel containing 7 symbols will lock for the turn with each locked reels increasing the multiplier.

What could be better than pirates mixed with Megaways? Iron Dog Studio thought the same thing and released Pirate Kingdom Megaways. This pirate slot plays on 6-reels with up to 117,649 ways to win through the Megaways mechanic.

Like most Iron Dog Studio slots, this one is packed full of character. The background of the reels is basically a vast ocean with a pirate ship in the distance. Amazingly, the water moves and the slot immediately makes you feel like you are on an adventure.

The middle of the screen contains the reels with different characters including the pirate and crewmates. Overall, the design is cartoonish but looks well drawn and certainly feels like a high budget.

There's a jaunty tune throughout spins and mixes with drum beats to create something more intense. In-between spins, the music is softer and the ambient sounds of the ocean overtake the music to give a sombre tone.

On the surface, Pirate Kingdom Megaways can be a little overwhelming - but it's straightforward. The ways to win open up through spins, and the free spins open up through wins - so it's simple.

You can find the spin and autospin button at the bottom right of the reels with the chance to set up to 99 autospins. The bet level button is to the far left with the main menu buttons as well.

According to the developers, the maximum win for this slot is 800,000 coins which can be achieved through the multipliers with the X2 wilds.

Pirate Kingdom Megaways is a high volatility slot with a great RTP of 96.20% which means that the payouts will be less frequent but higher when they do.

There's a lot to love in this pirate slot as Pirate Kingdom Megaways has all the right things going for it. You have the Megaways engine that opens up the slot, the tumble mechanic, the free spins and the dual wilds to make gameplay that's exciting and vibrant to play.

Of course, the design is fantastic and create the right atmosphere for this slot. We'd highly recommend you give this slot a spin as it's definitely worth it.

Play Pirate Kingdom Megaways now at the following verified UK slots sites. These slot sites are fully licenced and have been thoroughly vetted and reviewed by us to ensure they offer a great user experience, are trustworthy, secure, and have a wide variety of the best online slots in their lobbies including Pirate Kingdom Megaways:-