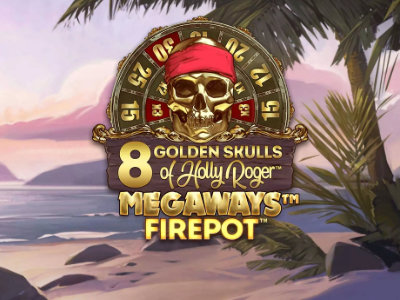 There are many greats within the pirate world but none bigger than Holly Roger. As the debut game of Buck Stakes Entertainment on Microgaming's platform, 8 Golden Skulls of Holly Roger Megaways is a high volatility slot that plays on 6-reels with 117,649 ways to win.

Set sail aboard Holly Roger's ship and join her scallywag crew. With free spins, Firepot jackpots and a bonus wheel, you'll be finding precious booty in no time.

It all starts with the Firepot feature that leads to fixed jackpots on the left side of the screen. If you manage to land between 3 and 8, you'll win a fixed prize. There are also mystery symbols that land on the reels and can be anything except scatters.

Alternatively, you can trigger the free spins round by landing 4 scatters. Each additional scatter deliver 2 extra spins. The amount of free spins is determined by the bonus wheel that also determines which multiplier will be attached. You can gain up to 30 free spins with multipliers of x3. 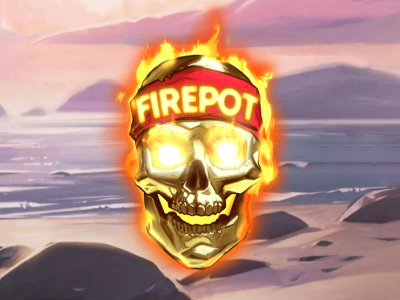 Land between 3 and 8 firepot skulls to deliver one of the fixed jackpots to the left side of the screen. During free spins, the Firepot can be multiplied by up to x3 for even larger wins. 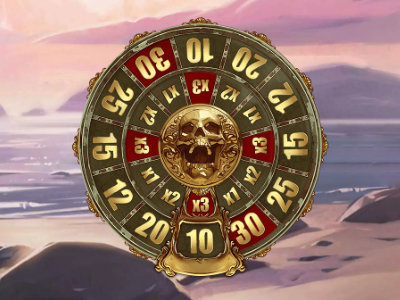 If you manage to gain 4 scatters on the reels, you'll trigger a bonus wheel that determines how many free spins and multipliers you'll have. This can be up to 30 spins with a multiplier x3.

8 Golden Skulls of Holly Roger Megaways plays on 6-reels with up to 117,649 ways to win due to the Megaways mechanic. This pirate slot features free spins, a bonus wheel and a Firepot consisting of some amazing wins.

As you enter the world of 8 Golden Skulls of Holly Roger Megaways, you are greeted with a serene background with a landscape view of the ocean with mountains in the background.

All of the symbols on the reels are part of Holly Roger's crew with all the ladies looking like 'femme fatales' and designed in a detailed style. The characters almost look like heroines in a comic book or a graphic novel.

Amazingly, the score is a jaunty pirate song that makes you want to get up and dance with the exciting beat. This only gets more intense throughout spins and only gets better with the ambient noises. You definitely wouldn't expect this slot to be the debut of Buck Stakes Entertainment.

If you've played a Megaways slot before, then you'll be familiar with the mechanic that expands the ways to win up to 117,649. However, this slot contains a fixed jackpot called the Firepot that has 6 different amounts that can be won instantly through landing a specified amount of golden skulls.

The screen is kept simple by having all the menus hidden around with the spin button just underneath the reels. Anything else you may need can be found to the right of the reels.

Starting off start with a high RPT of 96.86% that's way over the average standard and pairs well with the hit rate of 32.45% that highlights the percentage that you'll hit a winning combination. This slot also features high volatility leading to larger wins, but you'll have to be patient for payouts as they aren't as frequent as low volatility slots.

It begins to slow down with the maximum win being 6,000x your stake that can be achieved through the multiplier in free spins. Whilst this isn't a tiny amount, it's lower than you'd expect for an online slot.

It's a shock to find out that this is Buck Stakes Entertainment's first-ever online slot because it's absolutely fantastic. The name is a mouthful, but the gameplay is full of thrills with the combination of free spins and the Firepot leading to satisfying wins.

Of course, the design doesn't deliver anything new, but it's clean and generally looks great. If you are wanting a true pirate experience paired with the fun of slots, then give 8 Golden Skulls of Holly Roger Megaways a spin.

Play 8 Golden Skulls of Holly Roger Megaways now at the following verified online slot sites. These slot sites have been thoroughly audited and reviewed by us to ensure they offer an exceptional user experience, are trustworthy, safe, secure, and boast the best variation of online slots in their portfolio including 8 Golden Skulls of Holly Roger Megaways:-