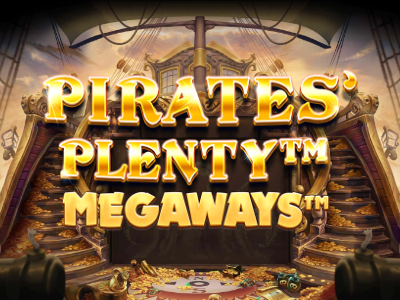 Jump aboard Lady Anne’s ship and journey across the seven seas to find bountiful booty. With up to 200,704 ways to win with Megaways, you’ll be able to win up to 10,000x your stake.

Along the way, you’ll traverse across the Wild Ways map and land wild monkeys and Lady Anne wilds. If that isn’t enough, then you can win up to 9 free spins with the potential to activate even more! So step aboard, and set sail with Pirates’ Plenty Megaways.

Jump straight into the action and play Pirates' Plenty Megaways now at the following fully licenced UK slot sites. These slot sites have been thoroughly audited and reviewed by the team here at Slot Gods to ensure they offer an exceptional user experience, are trustworthy, safe, secure, and boast the best selection of online slots in their portfolio including Pirates' Plenty Megaways...

Players will be happy to find out that Pirates’ Plenty Megaways is full of features! From the Wild Ways feature that involves players travelling across a map to reach the maximum Megaways and the expanding wilds. There are 2 different wilds - the Lady Anne expanding wild and the Wild Monkey that replace and stick.

There are even free spins rounds that can go up to 9 with the potential to add additional free spins with scatters. To make it even better, there is a rising win multiplier meaning that you could potentially win even more.

Collect map symbols throughout the game to sail across a pirate map. If you reach the other side, you’ll unlock the wild ways offering the maximum 200,704 Megaways and the Lady Anne Wild.

This lavish pirate wild can substitute all paying symbols and even expand the wild itself. You could win a multiplier of up to 8x and may only land in the top positions of the middle 4 reels.

During any spin, you may be lucky and see a wild monkey symbol on the reels. This removes all low paying symbols and locks onto the reels for that initial spin and any other subsequent respins.

Managing to land at least 3 free spin scatter symbols on the reels will unlock the free spins round. You’ll be awarded 9 free spins with 3 scatters, but gain an additional 3 free spins for each extra scatter. A rising win multiplier is applied during the feature.

Ahoy, Me Hearties! Prepare to sail aboard Lady Anne’s ship in the hopes of finding the most glorious treasure within all the land. She’s a tough but fair captain who expects her crew to pull their weight. Luckily, you aren’t alone with all the features to help you to find tasty booty.

The Pirates’ Plenty series has wowed online slot fans by making pirate themed slots that go above and beyond. Red Tiger decided that it was time for a Megaways makeover to give the fans even more ways to win. There’s literally no excuse to miss Pirates’ Plenty Megaways.

When you enter Lady Anne’s ship, you’ll notice rustic stairs surrounded by golden coins. To make things even more atmospheric, there is a slight indication of a kraken ready to attack. The reels are centred in the middle of the screen and almost look like a treasure map with the Wild Ways map at the top.

When you win, you’ll notice the ship and screen start to shake. It creates such a vibrant atmosphere for the slot that makes winning even more exciting. Red Tiger definitely tried to push the Pirates’ Plenty series even further.

Whilst there is no music in between spins, there is soft ambient sounds such as creaking or waves rushing. As you spin, you’ll hear a grand theme mixing violins and drums that almost sounds straight out of one of the Pirates of the Caribbean films. Between this and the intricately designed symbols, Pirates' Plenty Megaways is one of the best pirate themed slots that we've ever seen.

Whilst the visuals may look big and grand, the gameplay is relatively simple. There are 8-reels with up to 200,704 ways to win but nothing is too complicated. Menus can be found at the bottom left of the screen with the paytable and help menus as well.

The spin button is at the bottom right of the reels with the autospin to the far left. Players can go up to 100 autospins and are required to set loss limits.

As Pirates’ Plenty Megaways is a high volatility slot, you’d expect to receive less frequent but higher returns. The maximum payout for this game is 10,000x your stake according to the developers and this can be achieved with the Lady Anne wilds that expand and can award multipliers of up to 8x.

The most disappointing thing about this slot has to be the low RTP at 94.65%. Whilst this isn’t the worst we’ve seen, it’s just under the average standard for online slots.

Almost everything about this slot is pure brilliance but the win potential is a little lacking. It completely knocks down Pirates’ Plenty Megaways from a great game to just a good one. The design is phenomenal and perfect for the series, whilst the features are pretty innovative.

Perhaps if the RTP was above 95%, then Pirates’ Plenty Megaways would be a solid game for slot players. If you are a fan of the series, then you should definitely check out this slot. Don’t worry if you haven’t played any of the other titles as this one is fairly self explanatory. Just be aware that the RTP isn’t too high and you’ll get on fine.