Mystery Reels Power Reels is a 7-reel, 30 payline slot developed by Red Tiger Gaming that sees wins paid both ways! If you thought the previous two slots in this epic series were good, wait till you've tried this one! Players now benefit from a giant mystery symbol that lands 2x2 in size before cloning its way around the reels.

Jump straight into the action and play Mystery Reels Power Reels now at the following fully licenced UK slot sites. These slot sites have been thoroughly audited and reviewed by the team here at Slot Gods to ensure they offer an exceptional user experience, are trustworthy, safe, secure, and boast the best selection of online slots in their portfolio including Mystery Reels Power Reels...

Red Tiger Gaming has decked out this Mystery Reels sequel with Power Reels! This means that there are now 7 reels in play as opposed to just 5 that you'd find in the original Mystery Reels slot!

What this also means is that the game now allows for wins to be registered both ways! So strap yourself in as wins are paid not only from left-to-right, but right-to-left as well.

The main feature of this game is of course the Mystery Symbol. This legendary golden apple can land on the reels at any given moment and clone itself across the reels. It's not too dissimilar to the Mystery Symbol you saw in previous games, however, this one is 2x2 in size, so when it spreads, it really covers up some ground, creating some HUGE winning paylines. 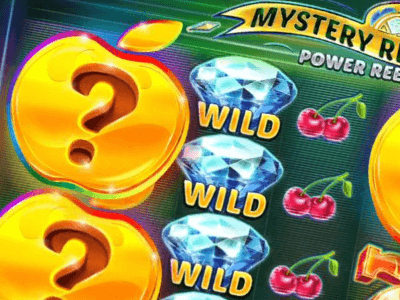 A 2x2 mystery symbol may land on the reels during any spin. Each mystery symbol is allocated a random number of clones that spread across the reels, revealing the same winning symbol.

Mystery Reels is simple in design, however, it's much more modern than the original game. Rather than looking like an old-school physical slot machine, this game appears as a sleek modern physical slot machine with neon colours on the trim which shine and change every few seconds.

The symbols have mostly stayed the same as the original game, they're all pretty old-school! We have cherries, lemons, oranges, plums and grapes, melons, bells and flaming 7 symbols all featuring. The game’s wild symbol is a diamond and the mystery symbol is of course a golden apple with a question mark on it.

Mystery Reels Power Reels is played like any other Red Tiger Gaming title, the stake can be changed via a dropdown menu in the bottom left-hand corner of the game screen, whilst the spin button sits in the bottom right-hand corner of the game screen. Players can also set up to a maximum of 100 automated spins as long as they set a loss limit beforehand.

Mystery Reels Power Reels has a slightly below-average RTP of 95.67% and a maximum win potential of 5,000x the players' stake which isn't terrible at all.

In a sense, Mystery Reels Power Reels is an awkward game to review, because there's very little to talk about considering it's just a slightly larger, re-skinned version of the original game.

That being said, it's still a lot of fun and the addition of 2x2 giant wilds made for some very exciting gameplay, especially considering the mystery symbols seemed to crop up regularly when we played!

If you're a fan of both the original and the Megaways version of Mystery Reels then you'll genuinely enjoy this title. It's generous enough and offers simple, easy-to-understand gameplay.