Dragon's Luck Power Reels is an updated version of Red Tiger Gaming slot Dragon's Luck. This slot retains all the same features as the original Dragon's Luck game, except it features an absolutely incredible 10-reels, as opposed to 5 found in the original. With 30 win lines in place players can win a total of 3,888x their initial stake.

“ Feel the power with an incredibly impressive 10 game reels! ”

Dragon's Luck Power Reels doesn't rely on flashy bonus features such as free spin rounds or mini-games in order to draw players in, instead, this slot utilises a number of special symbols that can seriously boost players bankrolls.

Firstly, we have Dragon Coins, these are coins that when they land upon the reels they'll spin and transform into another symbol, potentially forming a brand new winning combination of symbols.

Finally, this game boasts the Dragon's Help feature. This is where the two silver dragons situated on either side of the game reels randomly come to life and breathe fire onto the symbols. This will see all the coin symbols spin once again in an attempt to force bigger winning combinations. 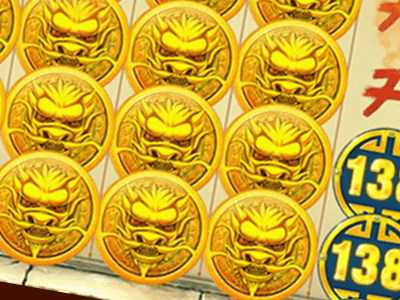 When Dragon Coins land upon the reels they'll spin and transform into another symbol, potentially forming a brand new winning combination of symbols. 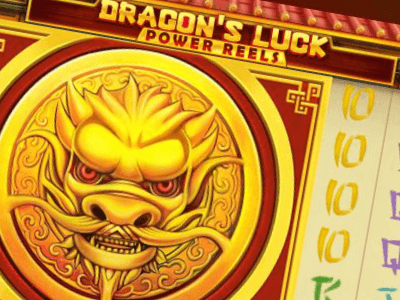 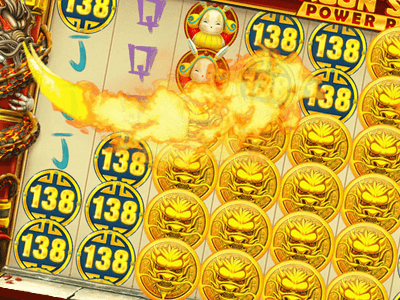 The Dragon's Help feature will see the two silver dragons come to life, breathing fire onto the reels. This forces the coin symbols to re-spin, forcing higher value symbols to appear on the reels.

Red Tiger Gaming has returned to the scene of their very first online slot Dragon's Luck to beef up the player's odds of winning big by adding not one, not two but FIVE additional reels to this classic slot. Dragon's Luck Power Reels boasts an impressive 10 reels in total, certainly not something you see very often!

This truly unique oriental-themed slot boasts bonus features such as Dragon Coins, Dragon's Help and Mega Coins that can grow up to 10x6 in size, covering the entire game screen! With up to 3,888x your stake on offer, what're you waiting for?

Dragon's Luck Power Reels is pretty much a soft reboot of the original in every single way, except that the number of reels on display have literally doubled in size! The game's mammoth reels are built into an ancient Chinese temple that's flanked on either side by two large pillars that have silver dragons wrapping around them.

When it comes to sound, players are treated to some stereotypical Asian-style music whenever the reels are spun and when wins are registered. However, the game is painfully quiet in between spins other than some very low-key music.

This Red Tiger Gaming slot is incredibly easy to navigate. On the bottom left-hand side of the game screen players can change their stake to anywhere between 0.10 and 20, next to that is a button that lets players set up to 100 automated spins.

On the right-hand side of the game screen is a large yellow spin button. If you're playing this slot in the United Kingdom then you'll notice that there's a loading bar working its way around the edge of the button after each and every spin, this indicates when 2.5 seconds has passed and players can spin the reels again.

Dragon's Luck Power Reels is a medium/high volatility slot that has a slightly below-average RTP of 95.06%. Players can win a maximum of 3,888x their total stake by way of the game's bonus features.

There's very little (other than the obvious ten reels) to distinguish Dragon's Luck Power Reels from the original slot, Dragons Luck. If you like the idea of playing on a set of highly unconventional reels then perhaps you'll enjoy this game, but don't expect fireworks as it's essentially still the plain old offering from 2016.