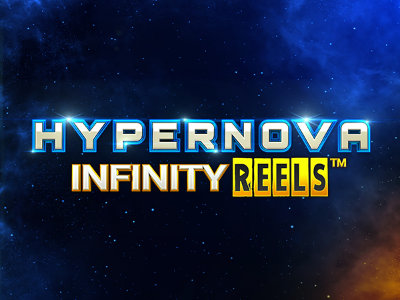 There are no set paylines or reels, but the slot starts on 3-reels and 4-rows but expands with every winning combination meaning there is an unlimited potential of reels and paylines. Aside from Infinity Reels, there are Bonus Respins, symbol multipliers and an Infinity Bonus to help you secure explosive wins.

“ It's written in the stars that you have to try out this slot! ”

Jump straight into the action and play Hypernova Infinity Reels now at the following fully licenced UK slot sites. These slot sites have been thoroughly audited and reviewed by the team here at Slot Gods to ensure they offer an exceptional user experience, are trustworthy, safe, secure, and boast the best selection of online slots in their portfolio including Hypernova Infinity Reels...

The main feature of this slot has to be the incredible Infinity Reels mechanic from ReelPlay which expands the reels each time you time a win. If you add 12 or more reels, then you'll win an instant prize of 888x your stake in the Infinity Bonus feature. This can occur during the base game or respins, but the multiplier cannot be applied during this.

There are also multipliers in this slot that start at 1 and increase with each new reel added through Infinity Reels. There is no limit on this multiplier but it's not applied to the Hypernova wins. ReelPlay's legendary mechanic allows players to expand the reels each time they win with unlimited potentials. Landing 12 or more reels, will instantly award you 888x your stake. This space slot also contains Bonus Respins along with multipliers that can lead players to the maximum win of 6,055.96x your stake. Soar through the cosmos in this stunningly beautiful slot and you might uncover some explosive wins.

As far as the design goes, it's similar to the other games within the series with a bright and vibrant image of the galaxy. There are various different constellations that slowly animate with space fans enjoying the view. Similarly, the symbols are clean shapes that sparkle and feel befitting in this slot.

In terms of music, there's a soft electronic score that you'd expect to hear in a science-fiction film emphasising how much it fits. Of course, it gets more intense throughout the Bonus Respins but still remains tolerable. Most of the design is extremely similar to the other slots which feel a little lazy, but it also makes the slots feel more cohesive.

This slot contains the Infinity Reels mechanic that expands the reels with each win. Ultimately, you start with 3-reels and 4-rows, but these can expand continuously. Aside from that, the gameplay is pretty standard and straightforward.

The volatility of this slot is medium to high with it leaning more towards the high level. It has a decent RTP of 96.26% which is over the average standard of 96%.

As for the maximum win, it's 6,055.96x your stake according to the developers which isn't the highest amount considering Hypernova Radical Reels has a maximum win of 25,000x your stake. With the respin, multipliers and the Infinity Reels, you'll have a great opportunity to win decent amounts but it'll never be bigger than 6,000x your stake.

Whilst this slot is magical to watch and space fans will love it, we were a little disappointed with the outcome. After the outstanding Hypernova Radical Reels, we were expecting something completely original but this slot just feels like a reskin of the Megaways slot but with the Infinity Reels mechanic.

Despite this, the graphics are still clean and entertaining enough with the gameplay being exciting enough - so Hypernova Infinity Reels is still worth a spin. However, we recommend trying out the rest of the games within this series as Hypernova Radial Reels is utterly unique.