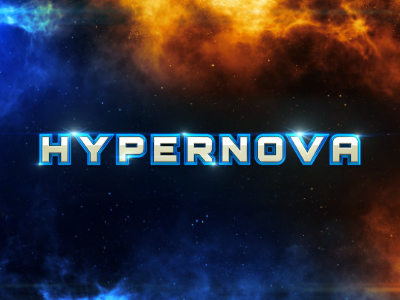 Journey into the depths of space and witness the beauty hidden amongst the stars in ReelPlay's Hypernova series. This slot series prides itself on unique and original mechanics that deviate from the norm of online slots.

All of these slots feature medium to high volatility gameplay combined with solid RTPs above the average standard of 96%. Amazingly, these slots have substance with a variety of features that'll help you gain supernova wins!

Journey to the Hypernova

Back in 2019, ReelPlay decided to create its own space-themed slot series which focused on the beauty of the cosmos combined with entertaining gameplay. The first game in the series was released in August 2019 with Hypernova Megaways which used the Megaways mechanic alongside a variety of features.

After the success of this slot, ReelPlay decided to push it further with Hypernova Radical Reels which came out July 2020. This absolutely shook up the iGaming industry completely ignoring the traditional payline system of reels and just having a circle with a central position that spins out the reels in a circle.

As the first and only one of its kind, this slot showed exactly how innovative ReelPlay are in terms of mechanics and highlighted that the Hypernova series is one to look out for.

Over a year after the release of Hypernova Radical Reel, ReelPlay decided to combined Hypernova with the Infinity Reels mechanic to create something intense with Hypernova Infinity Reels. Fans of the series now had infinite ways to win in space showing how fast the cosmos can actually be. There’s always something different going on with Hypernova and it’s the furthest thing from boring.

Soon after the release of Infinity Reels, ReelPlay decided to use their own unique 10K Ways for another slot in October 2021 called Hypernova 10K Ways. Players can now explore space with 10,000 ways to win instead along with the Bonus Respin feature that everyone loves!

This series is always engaging with mechanics that go against the norm and completely reinvent online slots. If you want non-traditional slots with vibrant visuals, then it’s a no-brainer to check out these slots.

Not only do each of the slots have a space theme, but they have amazing features that are thrilling to play. From free spins to respins, there’s literally something for everyone in this slot.

You can’t miss out!

There is no other series that does as much variety as the Hypernova series. Each game is unique and visually appealing with outstanding features as well. If you love space and wanted radically different slots, then try one of the Hypernova slots for a time unlike any other.