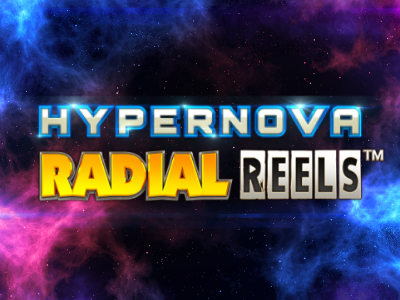 Hypernova returns but with a brand new mechanic from ReelPlay. Radical Reels uses rings rather than the standard vertical reels and wins are matched by matching up 3 or more symbols in a line from the outer to the inner ring.

Hypernova Radical Reels is unlike any other slot and you can't help but marvel at it as the gameplay does feel out of this world. This one of a kind slot can even deliver wins of up to 25,000x your stake - so there's no excuse not to try it.

Jump straight into the action and play Hypernova Radial Reels now at the following fully licenced UK slot sites. These slot sites have been thoroughly audited and reviewed by the team here at Slot Gods to ensure they offer an exceptional user experience, are trustworthy, safe, secure, and boast the best selection of online slots in their portfolio including Hypernova Radial Reels...

The first thing that you'll notice with this slot is that it's incredibly different to most other online slots. Instead of having set reels with paylines, this slot instead contains 3 circles with a central position that shoots out symbols.

Ultimately, you create winning combinations by landing 3 or more matching symbols in a line from the outer ring to the central position. This is ReelPlay's Radical Reels mechanic and is similar to Finn and the Swirly Spin.

Amongst all of the symbols, you'll find a purple orb which is actually the scatter. If you manage to land 3 or more of these on lines 1 through 6, then you'll activate the free spins feature. You'll be given 4 free spins with a multiplier that starts at x1.

Amazingly, each time you land a scatter, the multiplier increases by 1 and the free spins reset to 4. If you are lucky enough to land 12 or more scatters, then you'll trigger the maximum multiplier of up to x300 with up to 52 free spins.

Non-UK players will be able to buy the free spins feature and this increases the RTP to 97.3% - but this is not available in the UK. 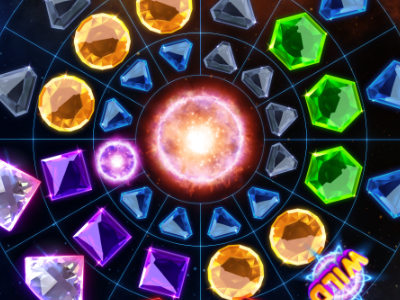 There are no traditional reels, but instead a wheel with 12 different paylines. It may look complicated, but all you need to do is land 3 or more matching symbols for a win. 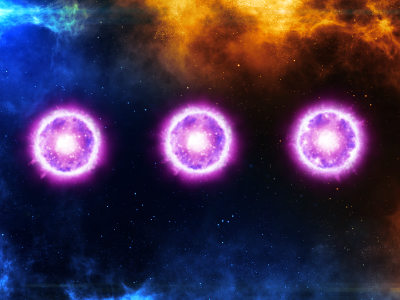 If you manage to land 3 or more purple scatters, then you'll trigger 4 free spins that reset with an increasing multiplier every time you land a win.

ReelPlay found success with the Hypernova series with Hypernova Megaways. Ultimately, this online slot showed the beauty of space mixed with engaging gameplay. Naturally, ReelPlay wanted to push this series even further with a new mechanic called Radical Reels. This mechanic completely ignores the traditional reel system and instead has a circle with 3 different layers to it with 12 paylines.

This mechanic is mesmerising and fits right in with the space theme of the slot, whilst keeping the gameplay fun and understandable. Hypernova Radical Reels is completely unique and is a must-play for any avid online slot player.

Just like the original slot, Hypernova Radical Reels is set in space with an almost identical background. There are various bright and ethereal colours that are scattered across the screen along with various stars and constellations. What's even more incredible is that the Radical Reels actually blend in well with the design as it looks like a space wormhole.

The symbols on the reels are almost identical to the original slot as well but it fits in with the theme. Of course, it would've been appreciated if they had changed some up or added new ones, but it's not too much of an issue.

As for the music, it's similar to the original but has a more epic score with violins mixing with the techno sounds. When you score wins, you'll have a diluted version of Georges Bizet's 'March of the Toreadors' which definitely makes you feel epic.

The Radical Reels mechanic is utterly unique and will definitely be hit and miss for some players. There are no traditional reels, but instead, 3 different circles that contain various symbols. The symbols come from the supernova in the middle of the screen and swirl out. You can win by matching up 3 symbols from the inner circle to the outer circle and that's all that you really need to know.

Whilst, this mechanic may seem complicated, it's pretty straightforward once you see it in action. As for relevant menus and buttons, you can find them at the bottom of the screen in a drop-down menu with the autospin, bet level and anything else you may need. The spin button is just right of the reels and stands out against the powerful background.

The RTP is at a decent 96.26% along with a medium to high volatility level. This slot definitely leans more towards high volatility, so make sure that you have the bankroll to sustain yourself.

Hypernova Radical Reels actually has a brilliant maximum win at 25,000x your stake - which is incredible for an online slot. However, it should be noted that the only maximum bet that we could find was 15.00, so don't expect earth-shattering wins.

It's always refreshing to try something new in regards to online slots, and Radical Reels are pretty entertaining. Of course, the Infinity Reels mechanic is one of a kind, but the Radical Reels could eventually be on the same level and be the next big thing.

From the design to the gameplay, you'll be in for a fantastic time with Hypernova Radical Reels. If you love trying new slot mechanics or love space themes, then definitely check out this slot for an unusual experience.

Play Hypernova Radial Reels now at the following verified UK slots sites. These slot sites are fully licenced and have been thoroughly vetted and reviewed by us to ensure they offer a great user experience, are trustworthy, secure, and have a wide variety of the best online slots in their lobbies including Hypernova Radial Reels:-