Finn and the Swirly Spin

Forget what you thought you knew about online slots, NetEnt's Finn and the Swirly Spin throws all of that out of the window! This groundbreaking game utilises one single swirling reel as opposed to five or six!

Finn and the Swirly Spin Screenshots

Finn and the Swirly Spin Features

Finn and the Swirly Spinn features brand new mechanics that have never been seen before in any online slot game, namely the Avalanche Swirly Spin mechanic. 25 Symbols swirl around the game screen along a single reel in a clockwise direction.

When a winning cluster of symbols are registered they’re removed from the game and all of the symbols move inwards towards the centre of the game screen, potentially creating new winning combinations along the way.

In the bottom left corner of the reel at the start of every single spin, a key symbol will appear. The free spins key will progress along the reel whenever winning spins are registered if it can make its way to the very centre of the reel and there are no more avalanches then a free spins round is activated. The more keys players collect throughout the duration of their gameplay, the more free spins and bonuses become active.

Naturally, Finn and the Swirly Spin features base game bonus mechanics that can greatly boost your bankroll. The most basic of these is the star wild symbol which can be triggered randomly at any time during the game. When they replace a symbol they’ll destroy all of the symbols vertically and horizontally adjacent to it.

One of four completely random features can be triggered following ANY winning spin and are applied after an avalanche is finished and before wins are awarded. 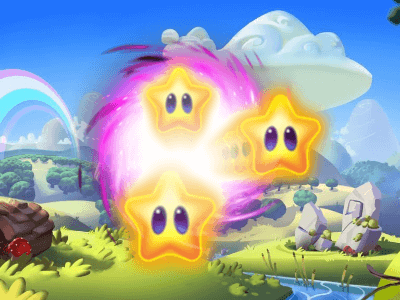 When the Starfall Wilds feature activates Finn will send anywhere between 2 and 5 wilds onto the reel in completely random positions, all of these wilds will then remove the symbols that are horizontally and vertically adjacent to them. 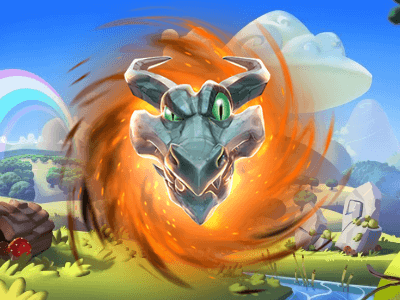 When Dragon Destroy has activated a random selection of symbols are destroyed and removed from the reel, causing an avalanche, potentially leading to a whole set of new winning symbols landing on the game screen. 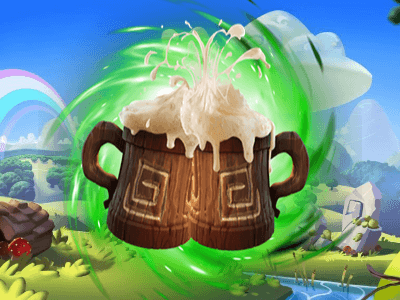 An entire row on the spiral reel will transform so that all symbols are identical, leading them to be removed from the game, causing an avalanche, potentially leading to a whole set of new winning symbols landing on the game screen. 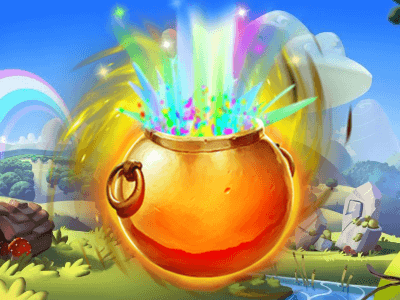 When Magic Transform is triggered all of the low paying heart and spade symbols are automatically turned into higher-paying symbols, potentially leading to lucrative payouts. 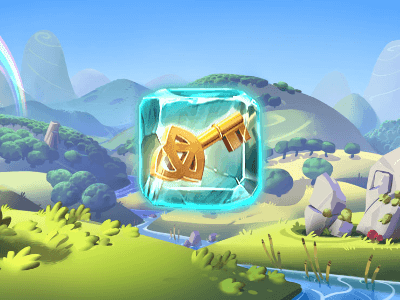 Players can choose from one of four different free spins rounds, each corresponding to an aforementioned feature, this depends on how many keys have been collected.

Finn and the Swirly Spin Review

Legendary online slot developers NetEnt decided to break the mould upon releasing Finn and the Swirly Spin back in 2017, this unique slot is renowned for ditching the traditional 5 reel setup you’ll see in almost every online slot game, replacing them with one single swirly reel.

This groundbreaking slot sees players register a winning spin whenever a group of symbols are clustered together on the reel as it swirls inwards towards the centre of the screen.

It’s fair to say NOTHING like this has ever been seen before, and other than the sequel to this unique slot, Finn and the Golden Tavern, nothing has existed since (take that as you will).

There’s a lot of nice features and bonus mechanics built into this game, and if you’re lucky enough to trigger one of them you can find yourself having a ton of fun. It doesn’t really feel like you’re playing an online slot and the swirly reel mechanic isn’t everyone’s cup of tea, but we have to admit, we’ve had a lot of fun playing Finn and the Swirly Spin over the years!

It goes without saying, Finn and the Swirly Spin’s biggest strength is its design. Like most NetEnt slots this game is absolutely gorgeous. A lush green countryside landscape sits behind the reels with trees, hills, mushrooms, fluffy clouds and a rainbow all featuring.

To the left of the main game reel, Finn sits in the grass against a rock playing a beautiful calming tune on his flute that continues for the entire duration of your gameplay. The only time Finn puts down the flute is after a winning combination or when a bonus feature is triggered.

Just like with Gonzo’s Quest, having a real character sat next to the reels really creates an extra dimension to the game, and we want to see more of this in the future!

This design team at NetEnt deserve great praise for the efforts on Finn and the Swirly Spin, it’s easy to churn out an Irish-themed slot and stick a static image behind the reels, but these guys have created a beautiful living, breathing world.

Played on a 5x5 grid with a single spiral reel, wins in this unique game are registered when matching symbols appear in a cluster of 3 or more together both horizontally and vertically.

This game differs from most cluster pay slots as rather than symbols falling from above, they instead swirl inwards from the bottom left-hand corner of the screen. Whenever a win is registered symbols are removed and new ones appear in the bottom left corner, causing the remaining symbols to pushed along the single reel towards the centre.

Finn and the Swirly Spin’s unique mechanics are genuinely different to anything you’ll have played before and anything you’re going to play in the future… But that’s not a bad thing.

This medium volatility slot has an RTP of 96.2% which is absolutely fine in our books, it’s a slot accessible to most players thanks to its wide betting range and fairly frequent payouts. Best of all you don’t have to wait forever for a big payout to come along. The max payout is a little low at 1,000x your initial stake, but don’t let that take too much away from this game.

NetEnt should be celebrated for trying to be creative and bring something new and exciting to the iGaming world with Finn and the Swirly Spin. The bonuses are fantastic and the avalanche feature gets our heart racing. We’ll be honest, Finn and the Swirly Spin is not for everyone, but that doesn’t mean you shouldn’t try this wonderfully exciting single reel slot at least once.

Play Finn and the Swirly Spin