Finn's Golden Tavern has three main bonus features and mechanics, two of which can be triggered randomly during base gameplay whilst another is earned through winning spins.

Next up there's the Random Coin feature. After all winning combinations and/or avalanches have occurred on a spin this feature may activate. Either 1 or 2 low paying symbols are randomly chosen to turn into coin symbols with a random value attached to them.

Finally, we have the Free Spins bonus! After all wins and/or avalanches have occurred, if the free spins chest has made its way to the centre of the game reel, sitting on the X marks the spot then players will automatically be awarded 5 free spins.

During the free spins bonus round there's a multiplier meter that climbs up by +1 every single time a star wild symbol appears on the reels with the new multiplier applied to all following wins for the remainder of the bonus session. 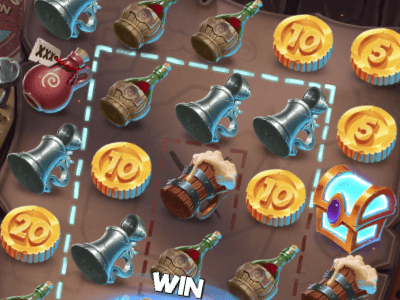 A fist may slam into the reels any time players register a non-winning spin. This will only happen when there are two horizontally or vertically adjacent coins on the reels at that given moment. A third coin will be placed into play to create a winning cluster. 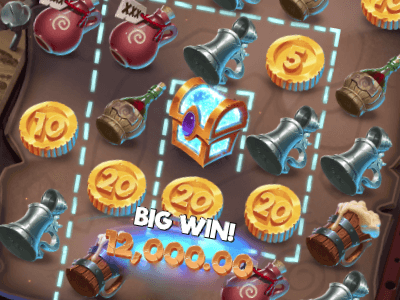 After all winning combinations and/or avalanches have occurred a random coin feature can be activated. This sees one or two low paying symbols chosen to turn into coin symbols with a random value attached to them. 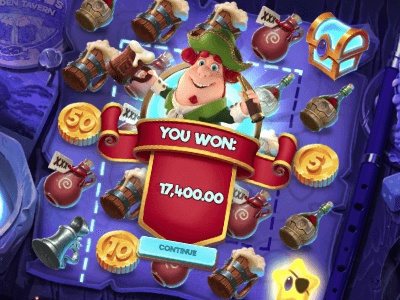 If the free spins chest symbol makes its way to the centre of the reels, landing on the X marks the spot then players will be awarded 5 free spins with a multiplier meter that can increases by +1 each time a wild symbol comes into play.

If you enjoyed NetEnt slot Finn and the Swirly Spin then you'll absolutely love the 2019 sequel Finn's Golden Tavern! This unique Irish-themed slot set in a quaint tavern is played on a 5x5 grid and sees the swirly cluster pays mechanic return as symbols work their way towards the centre of the game screen. There are absolutely no paylines to worry about in this slot! Wins are awarded when players when three or more matching symbols sit next to eachother horizontally or vertically.

This somewhat strange slot can see players trigger three lucrative bonus features, these are the Randon Coin feature, Fist Slam feature and of course Free Spins... All of which promise big wins!

Finn's Goldern Tavern is a bit of a departure from the original slot, the first game in the series was bright, vibrant and quintessentially Irish (with Finn himself bouncing around next to the reels), whereas in Finn's Golden Tavern things are a bit grittier! The game reels are set on the table of a darkened tavern next to a beer mat, compass, candle, dice and a dagger.

Low paying symbols in this slot are all golden coins with values set to them (5, 10, 20 and 50) whilst high paying symbols are all different drinks you can get from behind the bar, these are a jug of moonshine, a tankard, a bottle of wine and a stein of beer. It's interesting to note that all of the high paying symbols are worth the same amount of money if they appear! The special symbol is a sparkling blue chest and the wild symbol is an animated star (wearing an eyepatch) that looks just like the one from iconic Nintendo 64 video game Super Mario 64.

In terms of sound, this game is just like the original in the sense that you'll get to enjoy plenty of little quips from Finn himself who will pass judgement on what's happening on the reels at any given time, so listen out as there are some memorable one-liners! When it comes to music, there's a relaxing Irish tune playing quietly in the background that rightly feels like ambient background music you'd hear when sat in the pub.

As mentioned, this cluster pays slot sees winning combinations registered when three or more matching symbols land next to each other horizontally or vertically on the game grid. When winning symbols are registered they'll disappear and be removed from the game, this also causes the entire swirly reel to move inwards towards the centre where an X marks the spot sits. If the game's special symbol (a glowing blue chest) makes it to the X marks the spot then all of the remaining symbols will avalanche and a free spins bonus feature will begin.

It's also worth noting that the low paying golden coin symbols in this game pay differently to how they would in most standard online slot games. Each coin is allocated a specific value (5, 10, 20 and 50), if more than three of these coins land next to each other horizontally or vertically then their values will be added together and paid out.

In terms of navigating the slot itself, like most NetEnt slots it's incredibly simple to play! The action bar along the bottom of the screen is semi-transparent as not to take away from the overall game design. There's a dropdown menu on the left-hand side that allows players to set their coin value (between 0.10 and 5) whilst in the centre is an autoplay button that lets players set up to 1000 automated spins, a spin button and a turbo button.

This medium volatility slot has an RTP of 96.01% and can see players win a maximum of 1,000x their initial stake which for a modern online slot is frustratingly low.

Finn's Goldern Tavern is genuinely a lot of fun to play, but it's hard to look past the low winning potential. There's not much to differentiate between this game and the original, and usually you'd hope that a sequel improves upon the first game. That all being said, it's still a truly fantastic looking slot that will keep your attention. If you like online slot games that are a little bit out of the ordinary then we'd highly recommend giving this a spin.