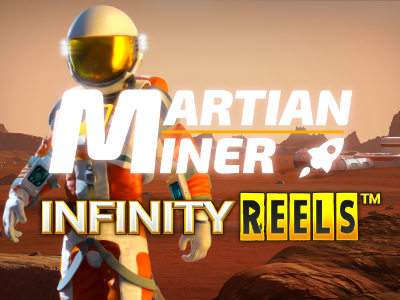 Martian Miner Infinity Reels is a one-of-a-kind Infinity Reels slot developed by ReelPlay and BB Games, under the tutorage of Yggdrasil. As of its release, this is the only Infinity Reels slot that plays vertically rather than horizontally, so if you're after a game that's completely unique and unlike ANYTHING you've ever played before then this is it.

“ This truly unique Infinity Reels slot is out of this world! ”

Martian Miner Infinity Reels boasts two main bonus features, the Teleport Reel Modifier and a Free Spins bonus. Both can prove to be incredibly lucrative in the right circumstances.

In addition to the above, it's also worth noting that additional wilds are added to the game reels during base gameplay after the first five infinity reels wins.

Players outside of the UK can also make use of a Buy Bonus that allows them to pay up to 100x their stake to unlock up to 20 free spins.

The Teleport Reel Modifier is a feature that kicks in randomly during base gameplay. This sees players transported to a random depth under the surface of Mars.

Whenever players hit the tenth level of depth under the surface of Mars with the drill (as a result of unlocking 10 or more consecutive infinity reels in a single spin) the free spins feature will automatically be triggered.

Once the feature comes to an end then the overall number of free spins will reset to 5.

The deeper down into the surface of Mars players manage to dig with each and every free spin, the more high-value symbols will appear (as they will replace lower paying symbols), these are as follows:

In addition to the above there are also three special symbols that can land on the reels during the free spins feature, these are as follows: 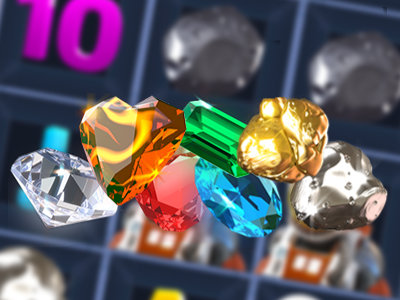 At any time during base gameplay, the Teleport Reel Modifier may kick in. This sees players taken to a random depth where low paying symbols are replaced by high paying ones. 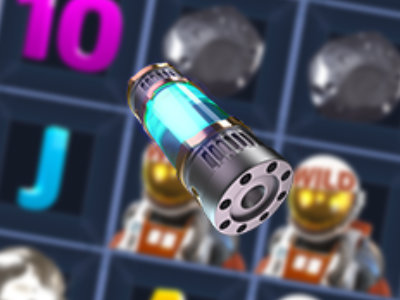 When players get past 10 infinity reels then they'll automatically trigger the game's free spins feature. They will receive as many free spins as they have unlocked by collecting Free Spins Fuel.

Martian Miner is a truly unique vertical mining slot with Infinity Reels that has been released by ReelPlay in partnership with BB Games, as part of the YG Masters programme. Try not to be intimidated by this somewhat strange slot, it's very different to anything you might well have come across before, but it's a lot of fun to play thanks to its unique gameplay, mechanics and the Teleport Reel Modifier and Free Spins features.

There are quite a few symbols that can appear on these reels, they are as follows (from highest value to lowest): 10, J, Q, K, A, iron ore, bronze ore, silver ore, gold ore, platinum ore, emerald, ruby, sapphire, diamond and marsonite.

Special symbols include an Astronaut wild symbol that appears on reel 2 and onwards and a Free Spin Fuel which adds +1 free spins to the total number of free spins players can trigger upon landing 10 consecutive infinity reels.

In terms of sound, players are treated to a slow atmospheric sci-fi score. Whenever the reels are spinning you can hear the sound of the drill working its way into the ground, it's nothing overly exciting until you start really digging deep, but it does the job.

The one thing we do have to point out about Martian Miner Infinity Reels is the fact that the entire game is cramped into the middle of the screen. Yes, this allows for a beautiful landscape view of the red planet behind it, but it does feel slightly off.

This unique space-themed slot is played on a 3x4 set of reels that spins from left-to-right rather than top-to-bottom. Every time players land at least 5 matching symbols on the reels from the top-down, then the game reels will grow vertically by a single reel every time a winning combination is formed. If you're struggling to visualise it imagine an ordinary Infinity Reels slot, but turned on its side.

Symbols pay from top to bottom where the participating symbol count is greater or equal to 5. Players can only add a total of 76 reels (which is a LOT, but it does kind of defeat the entire purpose of 'infinity' reels if you ask us). Wins are calculated when no more extra reels can be added to the game.

This medium/high volatility slot has an RTP of 96.06% and a maximum win potential of 5,536x the player's stake. If anything we'd say that this slot is as average as they come in this department, but if you're looking for a straightforward middle of the road game then we'd still highly recommend giving this a go.

Martian Miner Infinity Reels is certainly different to anything we've ever played before... Personally, we really enjoyed this game once we had gotten used to the core gameplay. In terms of pros, this unusual game really drew is in with excellent bonus features and quirky mechanics... In terms of cons, it's not at all one for purists and the win potential could be higher for such a landmark slot.