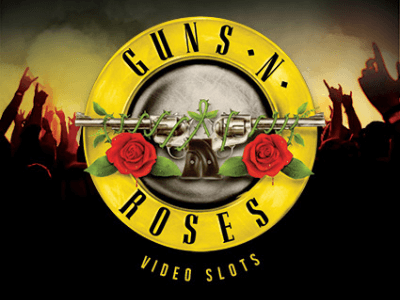 Guns N' Roses is a classic 5-reel, 20 payline rock-inspired slot developed by NetEnt that pays tribute to the iconic LA-based band, who are famous worldwide for hits such as Welcome to the Jungle and Paradise City! If you're looking for a slot full of bonus features and mechanics, we urge you to look no further as this game features a truly exciting bonus wheel and plenty of different wilds that can see players pick up some impressive wins.

Jump straight into the action and play Guns N' Roses now at the following fully licenced UK slot sites. These slot sites have been thoroughly audited and reviewed by the team here at Slot Gods to ensure they offer an exceptional user experience, are trustworthy, safe, secure, and boast the best selection of online slots in their portfolio including Guns N' Roses...

Guns N' Roses has a lot going in terms of bonus features and mechanics, so strap yourself in for a lot of fun, as there's certainly plenty to be had here!

At any time during base gameplay Legends Spins may activate randomly. This feature gives players 3 re-spins with either one or two stacked wilds in place. Each spin will see players receive different stacked reels featuring one of the three band members. On the second and third spin, there will be a stacked wild on reels one, five, two and four respectively.

Named after Guns N' Roses' very first album this feature sees a giant wild in the shape of a cross form over the game reels. It can form partly or entirely in 3 different places. Regular wilds can also land at the same time as the Appetite for Destruction wild.

At any time during base gameplay, a random multiplier can be placed on certain paylines.  This can increase players winnings between 4 and 10 times.

When players land three bonus symbols on reels one, three and five they'll trigger a bonus wheel that features different segments that can see players trigger one of three bonuses, these are the Crowd Pleaser Bonus, Encore Free Spins and coin wins.

The Crowd Pleaser Bonus Feature is arguably one of the most lucrative bonus features players can trigger, this kicks in when players land on it on the bonus wheel feature. After watching a short clip of Guns N' Roses live, players are taken to a pick and click mini-game in which they're tasked with picking random items.

Players get 3 picks, and if they earn enough coins they'll be taken to a second round where they'll have another 3 picks, again if they get a high enough score they can progress to a third round.

During this bonus feature players can also pick up additional picks and free spins if they're lucky.

If players land on the Encore Free Spins segment of the bonus wheel then they'll automatically receive 10 free spins, it's as simple as that!

The bonus wheel has multiple coin win segments, these can see players win anywhere between 10x and 30x their line bet. Legends Spins may activate randomly during base gameplay. This feature gives players 3 re-spins with either one or two stacked wilds in place. Each spin will see players receive different stacked reels featuring one of the three band members. The Crowd Pleaser bonus is a pick and click mini-game that sees players pick 3 symbols that reveal cash prizes, if players win enough during these picks then they'll get an additional 3, as well as the chance to win more picks and free spins. If players land on the Encore Free Spins segment of the bonus wheel then they'll automatically receive 10 free spins.

Guns N' Roses is a 5-reel, 20 payline music-themed slot developed by the genius team at NetEnt as part of their hugely successful NetEnt Rocks series! If you're a big fan of the truly iconic LA rock band then you'll absolutely fall in love with this high-quality branded slot.

This game is filled to the brim with innovative bonus features and mechanics that'll have you on the edge of your seat, a whole setlist of some of the band's most famous tracks and real video clips from multiple Guns N' Roses tours... Honestly, what more could you ask for?

Normally we'd talk about a slot's soundtrack last when covering design, but Guns N' Roses is all about the music. This game comes with a setlist of five officially licensed songs from the band that players can choose to listen to, Unsurprisingly, these are five of the band greatest hits, Welcome to the Jungle, Sweet Child O' Mine, Paradise City, November Rain and Chinese Democracy. Players can choose to change the song at any time if they want to try something different.

When it comes to design, this game just looks spectacular, especially for a 2016 release! The reels are set on a jumbotron you'd find either side of a stage whilst attending a festival or concert. Behind the reels is an open-air stage with fans crammed in to watch Guns N' Roses perform their catalogue of heavy hits.

If you're looking for a real insight into how this Guns N' Roses slot was created check out the behind the scenes video below from NetEnt that explains everything that went into creating this groundbreaking title.

Guns N' Roses isn't too complex in terms of overall gameplay, players can change their bet level and coin value on an action bar along the bottom of the reels, this gives them good versatility when selecting their stake, with players able to set it as low as 0.20 and as high as 200. Players can also use this action bar to access the game information, set up to 1000 automated spins and automatically set the max bet.

The other thing players will notice when playing this slot is the setlist in the bottom left-hand corner, if players click this they can choose to listen to five classic GNR tracks.

This low/medium volatility slot has an above-average RTP of 96.98%, however, it doesn't have the best maximum win of 1250x the player's stake. That being said, it's worth keeping in mind that this is an older game, and they do tend to have lower maximum wins in general.

This rocking slot most certainly gets out seal of approval! Guns N' Roses is as cool as they come, which hardly comes as a surprise to us considering NetEnt is behind this game. Not only does it have an awesome soundtrack that had us banging our heads throughout, but it also plays host to a ton of incredible bonus features and mechanics that had us grinning from ear to ear. Even if you're not a big fan of the band themselves, this slot deserves your attention.

Play Guns N' Roses now at the following verified UK slots sites. These slot sites are fully licenced and have been thoroughly vetted and reviewed by us to ensure they offer a great user experience, are trustworthy, secure, and have a wide variety of the best online slots in their lobbies including Guns N' Roses:-

Enjoyed Guns N' Roses? Here's a handful of similar slots we think you'll like too. These online slots have been chosen based on features and themes similar to Guns N' Roses. You might also want to check out other NetEnt slots.