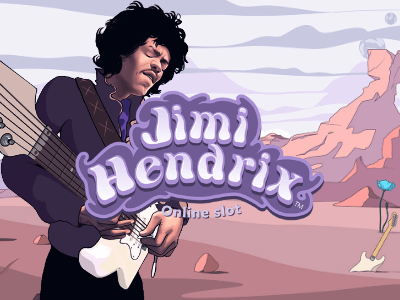 Get ready for a seriously trippy experience playing NetEnt Rocks slot Jimi Hendrix. This groovy 5-reel, 20 payline slot has so much to offer that you definitely do not want to miss out on it.

Players can trigger a grand total of six incredibly exciting bonus features that can really boost your bankroll with a lucky spin or two! Even if you're not a fan of arguably the greatest guitarist that ever lived this fantastic slot is well worth playing for the novelty alone.

“ Groovy, funky and truly psychedelic gameplay that's not to be missed! ”

Jump straight into the action and play Jimi Hendrix now at the following fully licenced UK slot sites. These slot sites have been thoroughly audited and reviewed by the team here at Slot Gods to ensure they offer an exceptional user experience, are trustworthy, safe, secure, and boast the best selection of online slots in their portfolio including Jimi Hendrix...

If you hadn't already noticed, Jimi Hendrix is FULL of unique bonus features and mechanics, here's our full breakdown of everything you can trigger in this epic rock and roll slot.

Landing 3 scatter symbols on reels 3, 4 and 5 then players will activate a pick and click mini-game. The game sees players attempt to match 3 of the same symbol. Depending on what is matched they can either win a cash prize, trigger Crosstown Traffic free spins, Purple Haze free spins or Littler Wing free spins.

If players land 3 Crosstown Traffic Free Spin symbols they'll trigger 6 free spins with wild reels. On the first spin, the fifth reel will be wild, the wild reel will then move left across each towards the first reel across the remainder of the 5 spins.

Managing to land 3 Purple Haze Free Spin symbols they'll trigger between 6 and 12 free spins. During these free spins any 10, J, Q, K and A symbols that land on the reels will turn into wilds.

If players land 3 Little Wing Free Spin symbols they'll trigger between 6 and 12 free spins with between 3 and 5 overlay wilds appearing randomly on the reels for each spin during the bonus. If players land 4 or more Red Guitar symbols players will automatically receive a respin, these respins can continue indefinitely as long as players continue to land the Guitar symbol on the reels. If players land 3 scatter symbols on reels 3, 4 and 5 then players will activate a pick and click mini-game. The game sees players attempt to match 3 of the same symbol. If players land 3 Purple Haze Free Spin symbols they'll trigger between 6 and 12 free spins. During these free spins any 10, J, Q, K and A symbols that land on the reels will turn into wilds. If players land 3 Little Wing Free Spin symbols they'll trigger between 6 and 12 free spins with between 3 and 5 overlay wilds appearing randomly on the reels for each spin during the bonus.

First things first, we have to talk about the fact that this psychedelic NetEnt slot is seriously cool, prepare yourself for a truly unique trip into the unknown with the most legendary guitarist of all time, Jimi Hendrix.

Part of the epic NetEnt Rocks series, this 5-reel, 20 payline slot has a lot to offer players (aside from some of the greatest music ever written) as players can enjoy four lucrative bonus features and mechanics including Red Guitar Respins, Purple Haze bonus feature, Pick and Click feature and Cross Town Traffic free spins.

Immediately upon opening the game players are treated to what's easily one of the best online slot cinematics we've had the pleasure of viewing. Hit song Voodoo Child begins playing as we see the silhouette of Jimi Hendrix strumming away at his guitar to the backdrop of a full moon and some shining stars.

It then dramatically cuts to Hendrix playing his guitar in the clouds, surrounded by amplifiers, as flower petals fall from the top of the screen. There's no denying that it's truly is a unique and beautifully designed introductory video.

The game itself is seriously trippy, ultimately it's an ode to a time when flower power ruled and Woodstock was the place to be. Behind the reels is a sprawling hand-drawn desert scene with drumkits, guitars and flowers poking out of the sand.

Jimi Hendrix is an incredibly easy slot to navigate and play. Everything is controlled using an action bar along the bottom of the game reels.

From left-to-right players can access an information page that runs players through the paytable and bonus features, a bet level selection tool, a spin button, a maximum bet button and a coin value button.

Despite having an above-average RTP of 96.9%, this low volatility slot offers players a painfully low maximum win potential of just 400x their stake.

Whilst the maximum win is a low amount compared to most online slots, the RTP is an outstanding 96.9% and the low volatility plays nicely to deliver wins at a frequent rate.

Jimi Hendrix is seriously the epitome of cool. If you want to be transported back in time to the 1960s and 70s then stop what you're doing and play the online slot on one of our trusted slot sites to load it up right away!

The only downside to this slot is the disappointingly low maximum win potential but the game makes up for it with everything else. If you're a fan of the great man himself then you'll fall in love with this slot, as it features a host of his best songs.

Even if you're not the biggest Jimi Hendrix fan you'll probably enjoy this slot for the novelty value. Those of you not in the mood for psychedelic rock, then what about heavy metal with Guns N' Roses or Motörhead?

Play Jimi Hendrix now at the following verified UK slots sites. These slot sites are fully licenced and have been thoroughly vetted and reviewed by us to ensure they offer a great user experience, are trustworthy, secure, and have a wide variety of the best online slots in their lobbies including Jimi Hendrix:-

Enjoyed Jimi Hendrix? Here's a handful of similar slots we think you'll like too. These online slots have been chosen based on features and themes similar to Jimi Hendrix. You might also want to check out other NetEnt slots.