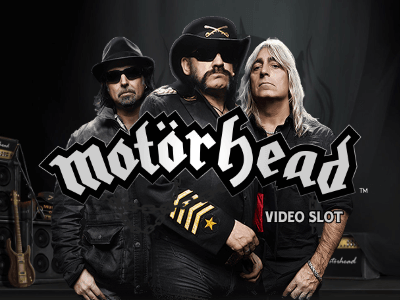 Are you ready to rock and roll with some of the greatest musicians the world has ever produced? Motörhead is an epic  5-reel, 76 payline rock n roll masterpiece based on the band of the same name. This game is part of the iconic NetEnt Rocks series and boasts three epic bonus features, the Mystery Reel Feature, the Bomber Feature and of course, Free Spins! Grab your bottle of Jack, pump up the volume and get spinning the reels of this gnarly slot!

Jump straight into the action and play Motörhead now at the following fully licenced UK slot sites. These slot sites have been thoroughly audited and reviewed by the team here at Slot Gods to ensure they offer an exceptional user experience, are trustworthy, safe, secure, and boast the best selection of online slots in their portfolio including Motörhead...

First and foremost we have the Mystery Reel feature that is active on every spin of the reels during base gameplay (as well as during the bonus feature). One or more reels will always feature stacked mystery symbols that will reveal symbols at the end of the spin, potentially forming winning paylines.

Secondly, we have the Bomber feature. This feature is triggered randomly before any spin, players will know when it kicks in as the game screen will be dimmed and an air raid siren will bellow loudly. Bombs carrying a cluster of mystery symbols are then dropped on the game reels and symbols explode. These mystery symbols replace the original symbols.

Finally, we have the free spins. Free spins activate when players land 3 scatter symbols anywhere on reels 3, 4 or 5 during base gameplay. During the free spins bonus the Mystery Reel feature is active, however as well as just standard symbols appearing, wilds can also land stacked, leading to some huge payouts.

The Mystery Reel feature triggers on every spin and turns one (or more) of the game reels into a mystery reel that can display stacked symbols that can potentially form winning paylines.

The Bomber feature can activate randomly ahead of any spin during base gameplay. The stage lights dim, and an air siren goes off. Bombers will drop bombs onto the game reels, blowing them up and filling them with wild symbols.

When three scatter symbols land anywhere on the game reels players will automatically be awarded with 10 free spins. During these free spins the mystery reel can contain both standard symbols and wilds.

Released in 2016, Motörhead is the third and final game in the legendary NetEnt Rocks series, this unique 5-reel, 76 payline rock n roll masterpiece based on the band of the same name seriously packs a punch with three quality bonus features to enjoy!

What are you waiting for? Grab a bottle of Jack, raise a toast to Lemmy and get spinning, as you could find yourself picking up some solid wins playing this heavy-metal hitter.

High paying symbols are the number 7, a silver bell, a golden star and of course, the man himself, the late Ian Fraser Kilmister, better known as Lemmy, the band's famous lead-singer and bassist. Special symbols include a golden Ace of Spades as a wild, and a golden Motörhead logo as the game's scatter symbol.

When the reels aren't spinning players can hear the buzz of a live crowd awaiting Motörhead to hit the stage, when the reels are spinning players are treated to some of Motörhead's greatest hits, this is assuming players have pressed the 'Rock Mode' button that actually starts the music! Personally, we don't understand why anyone that chose to play this slot would ever avoid pressing this button. If players manage to trigger the free spins feature, the music will change to Motörhead's greatest hit, the Ace of Spades.

The most jarring thing about this slot is the fact that the reels are set up in a 3-3-4-4-5 formation, as opposed to being equal in length like most standard slots, but this isn't a bad thing, we love a bit of variety in our gameplay.

In terms of navigating the slot, this 2016 hit allows players to change their bet level and coin value on the action bar along the bottom of the screen. Players can also set up to 1000 automated spins or automatically set the stake to the maximum with one click of a button.

If you're after low volatility gameplay then this slot is well worth playing, especially considering it has a pretty solid RTP of 96.98%. Unfortunately, this slot falls flat on its face when it comes to winning potential though, with only a maximum of 570x the player's stake on offer.

We genuinely enjoyed playing Motörhead, it's a great looking slot with some great music... And sometimes that's all it takes to get us hooked on a game. To top it off we found the bonus features to be genuinely exciting and kept us engaged, especially considering they triggered fairly regularly during playtesting, which was nice to see.

If you're a Motörhead game then you'll fall in love with it instantly, if not then you should still enjoy it, even if the low win potential does leave a bad taste in your mouth.

Play Motörhead now at the following verified UK slots sites. These slot sites are fully licenced and have been thoroughly vetted and reviewed by us to ensure they offer a great user experience, are trustworthy, secure, and have a wide variety of the best online slots in their lobbies including Motörhead:-

Enjoyed Motörhead? Here's a handful of similar slots we think you'll like too. These online slots have been chosen based on features and themes similar to Motörhead. You might also want to check out other NetEnt slots.