The Play'n GO rock series is back and this time it features the rockers from the band Testament. An American thrash metal band which formed in 1982. Don’t worry, you don’t have to be a fan to enjoy this slot. This game is rockin’ awesome anyway, it has five bonus features and 2,400 ways to win. You can also pick up 20,000x your stake in this headbanger!

“ One of those who like their slot play heavy and hardcore! ”

Jump straight into the action and play Testament now at the following fully licenced UK slot sites. These slot sites have been thoroughly audited and reviewed by the team here at Slot Gods to ensure they offer an exceptional user experience, are trustworthy, safe, secure, and boast the best selection of online slots in their portfolio including Testament...

Play ‘N Go’s Testament slot follows on the rock series and continues its forms with brilliant gameplay and generous features. This game takes you into a rock-heavy world of demons and monsters where you'll rock your way to some rad bonus extras. This game has a total of five special features, including free spins and sticky wilds. Let’s take a look at all the features you can expect to find in the Testament slot. 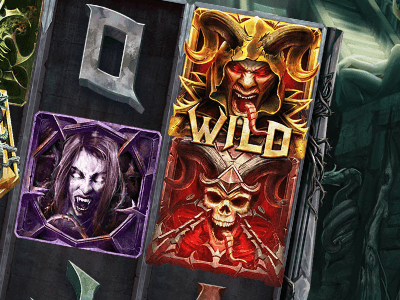 Triggered by landing 2 scatters, this feature gives you 3 free spins with any wilds that appear on the reels are sticky for the duration of the spins. 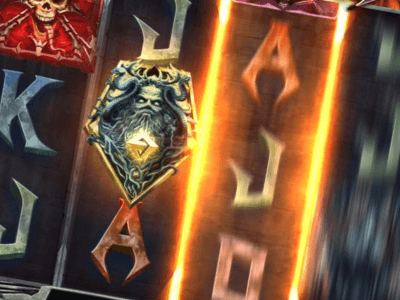 Triggered by landing 2 scatters, this feature makes the skull symbol spread up or down to give you more wilds. 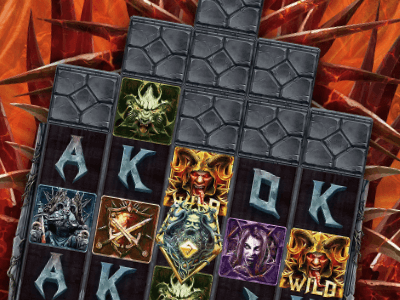 Triggered by landing 2 scatters, the grid will expand to 4x5x6x5x4 so that you’ll play with 2,400 ways to win which increases the win potential. 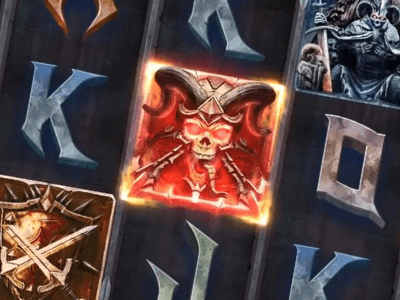 Land 3 or more scatters to trigger this feature. You get 9 free spins with the reels expanding to offer 2,400 ways to win. The 9 spaces at the top of the grid expand when a scatter is landed. Landing 9 scatters during the spin feature will trigger the Testament Spins. 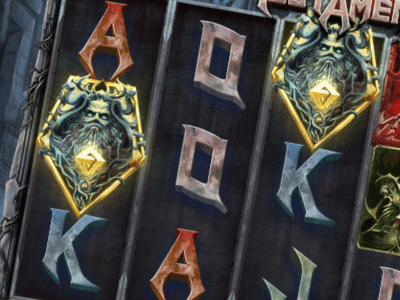 Triggered by landing 9 wilds during the Rise Up spins, you get 3 free spins as well as any remaining Rise Up spins. In this feature, all Song features combine so all wilds become sticky and also spread.

Testament is one of the many slots from Play'n Go’s rock series. The game is based on the hard thrashing American band of the same name. This heavy metal-themed slot packs in a lot of action with some highly rewarding features and some impressive gameplay.

Played on the usual 5 reels and 4 rows, the Testament slot provides an impressive 2,400 ways to win. As you razz through the reels you will enjoy a playlist from the band. This is significant because the scatter changes based on the song being played and will trigger a different feature with each scatter in play.

The game has some pretty cool demonic imagery that ramps up the thrill on the reels. Set is an apocalyptic demon underworld, the game combines some exceptional visuals with a rockin’ soundtrack.

Play'n Go has delivered some big hits when it comes to high paying slots that are full of features. Testament is another great slot that has all the elements to make for some hardcore action.

Testament has a pretty intense and dark setting, the game takes place in some sort of demonic cathedral, combined with a thrashing soundtrack - it’s quite the spectacle. The game looks very much like a heavy metal album cover.

On the reels, you have some very menacing characters that can only be described as demonic overlords. The game screams death metal with its dark and grungy aesthetics. The sinister characters on the reels bring some cool animation to the scene when they are landed. When a winning line is hit the reels will light up and when the bonus feature is in play you will enjoy some seriously awesome audio and visuals that fully immerse you.

Although the game is very impressive in design and shows off when it comes to animation, it does feel like this would only appeal to those who like heavy metal, or at least the look of a dark underworld.

The game grabs your attention with the stunning imagery and rockin’ soundtrack, but it's not for those who prefer something a little easier on the eyes.

The game features 5 reels and 3 rows, but the reels expand when you’re in the bonus feature. This adds the extra symbols to increase the win potential. Other than that, the gameplay is very familiar within Play'n Go slots.

The spin button is the brightest button on the control panel and next to that sits the auto spins control where you can play up to 100 spins automatically. Then across the bottom is the bet amount which ranges from £0.10 up to £100, so a very versatile betting range. Next to that is the information icon which provides a quick and easy breakdown of the symbols and in-game features.

It wouldn’t be a Play'n Go slot title if it didn’t have decent win potential. Testament has a solid 96.2% return to player percentage, which suggests you will win back an average of £96.20 for every £100 wagered. Of course, this is over a long betting time. The main attraction here is that you can scoop a huge win worth up to 20,000x your bet, making it one of the highest paying slots in the rock series. This offers a top prize of a massive £2,000,000.

This fantastic creation from Play'n Go ticks a lot of boxes. It boasts exceptional visual quality, a blaring soundtrack, thrilling features and mega rockin’ payout potential. To play this game you will have to accept the sinister appearance and embrace the chaos. If you can ramp up the reels in this hardcore playing environment, then you will be seriously rocking your way to a mosh pit of thrills and spills.

Play Testament now at the following verified UK slots sites. These slot sites are fully licenced and have been thoroughly vetted and reviewed by us to ensure they offer a great user experience, are trustworthy, secure, and have a wide variety of the best online slots in their lobbies including Testament:-

Enjoyed Testament? Here's a handful of similar slots we think you'll like too. These online slots have been chosen based on features and themes similar to Testament. You might also want to check out other Play'n GO slots.