Batman & The Riddler Riches from Playtech is another slot in the DC Super Heroes jackpot series. The progressive jackpot game brings back classic Batman, played by Adam West. The slot is jam-packed with fun gameplay and exciting bonuses. Played on 5 reels with 243 paylines and five bonus rounds, there is plenty of excitement on the reels of this Batman-themed slot.

“ Exciting with plenty of rewards to chase down. ”

Jump straight into the action and play Batman & The Riddler Riches now at the following fully licenced UK slot sites. These slot sites have been thoroughly audited and reviewed by the team here at Slot Gods to ensure they offer an exceptional user experience, are trustworthy, safe, secure, and boast the best selection of online slots in their portfolio including Batman & The Riddler Riches...

Playtech is not shy when it comes to including rewarding bonus features and Batman & The Riddler Riches is packed with extras. The game uses cascading reels where you can win multiple times on each spin and a Mystery Reels feature.

However, it’s the Batman vs Riddler Bonus Wheel that delivers the big payouts. Let’s take a look at the bonus features you will find in this progressive jackpot game. 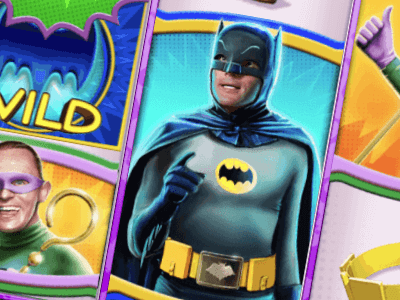 When you hit a winning combo, the reels collapse with winning symbols removed and replaced, giving you a chance to win time and time again. The waves continue until you don’t get a winning combination. 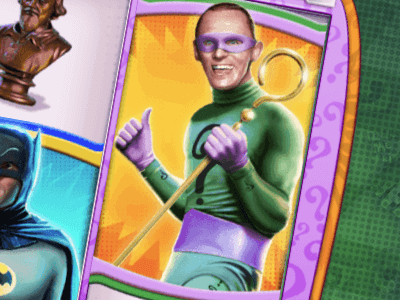 This feature is triggered randomly on any base game spin. You get to riddle your way to big wins as the Riddler adds mystery symbols which transform into the same symbol to give you a winning combo. 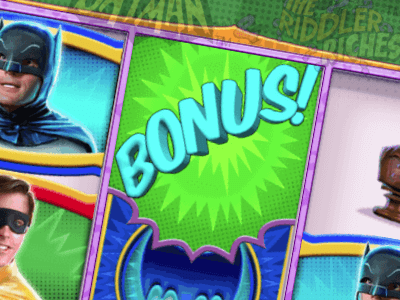 Batman vs The Riddler Bonus Wheel

Land the bonus symbol on reels 1, 2 and 3 to trigger. You get to spin the wheel to play 1 of 3 features. 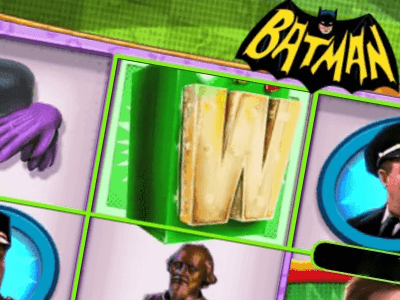 This feature comes through the bonus wheel and gives you 10 free spins where sticky wilds can land on any spin and will remain sticky for up to 3 consecutive winning spins. 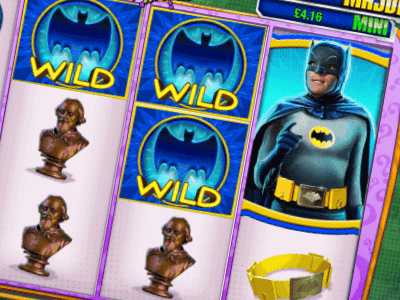 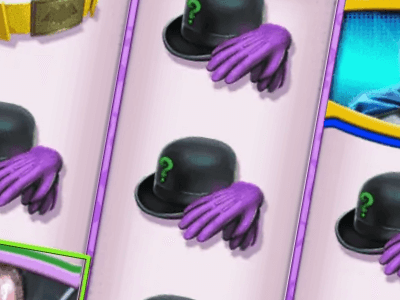 This feature comes through the bonus wheel. You need to solve the riddle to win big prizes as you open the boxes to reveal cash prizes. If you match 3, you will get that corresponding prize. You can also open 3 more boxes to match 3 multipliers which can boost your total payout.

Playtech’s DC Super Heroes jackpot slot series continues with the Batman & The Riddler Riches. Old school Batman is back and this time he is battling the Riddler on the reels. This game is set around the 1960s Batman TV series starring Adam West as the caped crusader and Frank Gorshin as the Riddler. The Playtech-powered slot is very much designed in line with the classic TV show with plenty of popping colours and some whamming animations.

The 5-reel video slot uses cascading reels which provides more chances to win, winning combos are removed and replaced, so another winning combo can potentially land. There are plenty of wilds and multipliers on the reels with several bonus features to trigger, including some generous free games round and of course, four progressive jackpot prizes.

The gameplay is simple and takes you back to the TV show with soundbites, clips and fun animation to spice things up. The game doesn’t take itself seriously and provides some very rewarding slot fun for all slot fans.

Batman & The Riddler Riches has a comic book style appearance that’s full of classic colours. The vibrant and fun appearance maintains the look and feel of the original TV series. The game uses greens, oranges and purples, which are the colours that Batman’s enemy, the Riddler wears. Overall, the slot looks jazzy and jolly, making it a kick-ass environment to play. Kapow!

When you land one of the high paying symbols a short clip will play from the TV series. If you trigger one of the bonus extras you will enjoy plenty of thrilling animation combined with the classic Batman soundtrack that ramps up the fun.

Batman & The Riddler Riches is a very lively slot game that grabs your attention through its impressive visuals and awesome animations. The fun and the friendly game is sure to get your adrenaline going.

The 5-reel slot has the standard setup with uncomplicated gameplay throughout. The game displays the four progressive jackpot prizes above the reels. The slot’s control panel will look very familiar as all the games in the DC Super Heroes series use the same design. The spin button is on the bottom right, next to the turbo mode and autoplay. The turbo mode will increase the speed of the reel spins and autoplay allows you to set up to 99 spins to play automatically. On the left side sits the bet amount which can be set between £0.25 and £60. Then you have the info button which provides more information on the bonus features and game symbols.

Batman & The Riddler Riches is a medium variance slot machine with a 96.09% RTP. The Riddler is the top paying symbol and can deliver up to 20x your stake for 5-of-a-kind. The bonus features are where the true payout potential is released. You can hit multipliers up to 10x and can hit up to 10 back-to-back wins through the cascading reels. The big reward potential comes through the four randomly triggered progressive jackpot prizes where the grand jackpot is the largest and can dish out hundreds of thousands for a life-changing win.

Playtech’s Batman & The Riddler Riches slot continues the old school action alongside Batman & Catwoman Cash and Batman & The Penguin Prize in the DC Super Heroes series. The game is packed with some thrilling bonus features and delivers pleasing gameplay from the first spin. The randomly triggered jackpot prizes are the main attraction but there are plenty of high payouts for the taking. The vivid colours and vibrant reels provide an engaging playing environment. This slot game packs everything into its utility belt, enough to please all slot enthusiasts.