The Playtech-powered Batman & The Penguin Prize slot is one of many comic-book themed games in the DC Super Heroes jackpot series. The game is bringing the classic 1960s Batman TV series starring Adam West to the reels. The 6-reel slot has up to 4,096 paylines and plenty of bonus action. There are four randomly triggered progressive jackpot prizes to play for in the fun-filled slot.

“ A fun and friendly slot that’s full of life! ”

Playtech’s Batman & The Penguin Prize has been created around some very exciting features. The game is played with one additional reel, making it a 6-reel slot and offers some very enticing rewards. In true Playtech form, the in-game bonus round is thrilling and rewarding.

On top of four progressive jackpot prizes, there are some big wins to grab within the bonus feature. Let’s take a look at the Batman & The Penguin Prize bonus play. 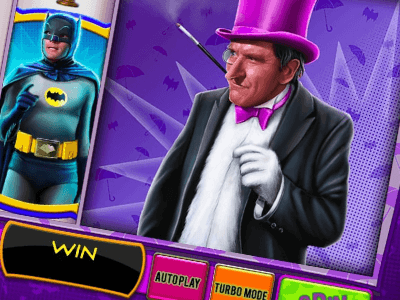 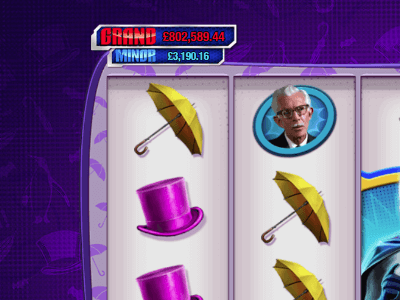 You can trigger one of four progressive jackpot prizes at random. If you trigger the jackpot, it will open a mini game that guarantees one of the 4 jackpots. You will pick from symbols, and if you get enough matching, one of the four jackpot triggers.

Retro Batman returns in Playtech’s Batman & The Penguin Prize. The slot is based on the classic 1960s TV series starring Adam West as the caped crusader and Burgess Meredith as the Penguin. The game is part of Playtech’s famed DC Super Heroes slot series which includes Batman & Joker Jewels, Batman & Batgirl Bonanza and many more. This game upholds all the fun and jazzy things about the original TV series and places them on the reels for some seriously old school fun.

The Batman & The Penguin Prize slot is played on six reels and has between 64 and 4,096 paylines to hit. You can expect plenty of high paying symbols and a lucrative bonus feature that can see some nice wins. The main attraction of this game is that there are four randomly triggered progressive jackpot prizes to hit.

The game maintains the look and feel of the original TV show with quirky graphics and plenty of colours. As you spin the reels you will be taken back to the cult classic TV show with all the fun characters and brilliant catchphrases.

Batman & The Penguin Prize has a pop-art comic-book style that stays true to the TV series. The background uses lots of purples, which is the colour the Penguin likes to don. The slot is visually pleasing with jazzy images, making it an indulging gaming environment.

The reels are populated with some of the original characters such as Batman, Robin and the villainous Penguin. The lower paying symbols are made up of Penguin’s umbrella, top hat and other items from the series. When you land the high paying symbols on a winning line you will enjoy a clip from the TV series. The game uses plenty of iconic soundbites from the TV show so be prepared for some questionable catchphrases.

The game does a great job of bringing the old school vibe of the TV show to the reels, the combination of vibrant visuals, super soundbites and classic characters create an awesome slot experience.

The Batman & The Penguin Prize slot has a different setup to most slot games. The game uses six reels, but only 3 reels are in play until you hit a winning combo, when you hit a win, the other 3 reels come into play, but not all at the same time. The other 3 reels will spin and if you hit another winning combo, all 6 reels will spin but with 2x2 super symbols in play for increased chances of winning.

Above the reels are the four progressive jackpot prizes and the respected amounts. These are triggered on any random spin in the base game. At the bottom of the reels is the control panel where you can spin the reels, activate autoplay and set your bet amount between £0.25 and £125, making it a suitable choice for all bankrolls and budgets. There is also an Info button where you can gather more information on the payouts, features and jackpots.

Batman & The Penguin Prize is a medium variance game with a 96.06% RTP. The game benefits from a rewarding Re-Spins feature where every win is turned into another opportunity to win. If you hit a consecutive win then you will unlock more ways to win and increase the reward potential. The game can deliver up to 4,096 ways to win.

The true payouts are in the progressive jackpot prizes which are triggered at random. Any spin in the base game can open the jackpot feature, once the feature is triggered you are guaranteed to scoop one of the jackpot prizes. The top jackpot currently sits at over £750,000.

Playtech’s Batman & The Penguin Prize game is a well-designed slot that is faithful to the cult classic Batman TV series. The visually bright appearance makes it a very inviting place to play while the sole bonus feature brings some excellent payout potential. The game only offers one in-game feature which takes away some of the excitement. However, there are four progressive jackpot prizes that offer life-changing payouts.