Playtech’s superhero slot series is back with the Batman & Catwoman Cash slot. The game takes you back to the old school Batman from the 60s played by the legendary Adam West. This game is stacked with bonus extras and exciting jackpots. As you play through the game you will come across heaps of free spins, multipliers and more rewarding symbols.

“ Get a kick out of some thrilling gameplay and retro rewards! ”

Batman & Catwoman Cash brings back the caped crusader, this time in vintage style. The Playtech slot game has plenty of action on the reels, including the chance to scoop four randomly triggered progressive jackpots.

This game features a lucrative free spins round, a pick me bonus and plenty of multipliers to boost those payouts. Let’s take a look at what features you can expect to find in this awesome slot. 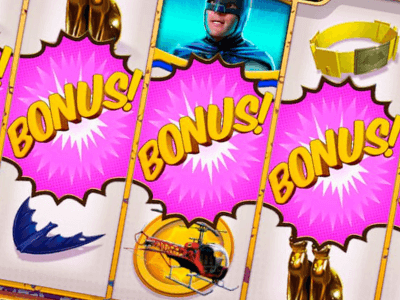 Landing the pink bonus icon on the first and third reel triggers the Bonus round. Here you ger to pick a scatter symbol to win a cash prize or increase your win multiplier for the Batman vs Catwoman free spins feature. 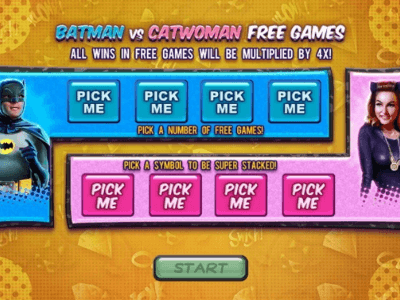 This feature is triggered on the pink bonus symbol landing on reels 1, 3 and 5. You will get to pick from a number of choices, offering between 7 and 25 free spins with a multiplier starting at 2x. 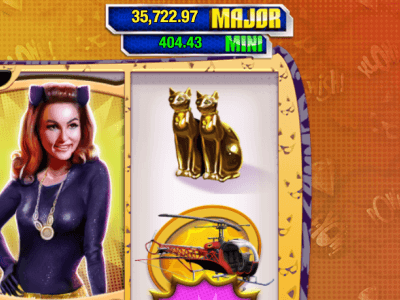 There are four progressive jackpots in this slot. It’s triggered at random and will take you to the DC Super Heroes Jackpot game feature where you are guaranteed to win 1 of 4 jackpots. The higher your stake, the bigger your chances of winning. There is a Grand, Major, Minor and Mini jackpot with the former being the largest.

Get ready for some old school slot fun in the Batman & Catwoman Cash from Playtech. This game brings back vintage Batman and the loveable cast of characters from the original TV that aired in the 1960s, played by Adam West. The 5-reel slot has a fun and friendly appearance with plenty of action in 25 paylines, a pick me bonus, free spins, multipliers and multiple jackpots. Kapow!

The game has been created with vintage comic book pop-art style to make for a pleasing homage to the original Batman TV show. The game is part of Playtech’s DC superhero slot series that features other Batman and DC superhero slots. The game features snippets and soundbites from the TV show so you will truly enjoy the tribute to the first show to bring Batman to our screens.

Batman & Catwoman Cash brings together immersive features, enticing rewards and brilliant gameplay that makes it a very entertaining smash and grab slot. You don’t need to be a Batman fan to enjoy this fun, friendly and adventurous slot from Playtech. There’s no school like the old school and this slot is all about the old school. Wallop!

The Batman & Catwoman Cash slot stays true to the original TV show when it comes to the design. The game features pop art aesthetics that take you back to the original comics and the “Wham! Bam! Kapow!” of the TV series. The slot has a very tongue of cheek feel to it with light-hearted action and plenty of fun animation. You will also get to enjoy some clips from the original TV series which bring up the entertainment levels nicely.

The game is played on a colourful yellow backdrop with some funky fonts and plenty of colourful symbols. On the reels you will find the caped crusader himself in the notorious skin-tight outfit, his sidekick Robin, Catwoman herself and some iconic items from the series as the lower-paying symbols.

When you trigger one of the bonus features you will get to indulge in some visual excitement with enthralling animations. The game has the retro style that pops off the screen and brings vintage batman back to life on the reels. Fun, friendly and full of life, the Batman & Catwoman Cash slot boasts awesome graphics and a spectacular soundtrack that ramps up the thrill of playing.

The slot is set on the usual 5 reels with 3 rows. The four progressive jackpots are indicated in the top corners of the reels and a text bar sits centrally which display what special symbols you need to land to trigger bonus features. The user-friendly game then has big and clear buttons for your standard slot controls. The spin button is clearly labelled and sits bottom right while the auto play control is to the left of it and allows up to 100 automatic spins. On the other side you can effortlessly set your bet between £0.25 and £500, so the Batman & Catwoman Cash slot more than covers all bankrolls. There is also an information button where you can dive a little deeper into the gameplay and get to know the values of the symbols and features.

The game has some respectable win potential on the reels. First, there are four large progressive jackpots on the reels, all of which are triggered by random. These jackpot amounts can grow fast and reach into the hundreds of thousands for a truly life-changing win. Outside of that, there are some high paying features where you can grab up to 25 free spins with multipliers in place. The Batman symbol is the most rewarding and can give you 100x your stake. The game has an industry average 95.11% return to player percentage, making this a medium variance slot title.

Batman & Catwoman Cash is a fun, quirky and rewarding slot from Playtech. The superhero-themed game is just as fun and exciting as any comic-book themed slot. A lot is going on with the rewarding bonuses, and the jackpots make for a very attractive prospect. The game is fast-paced and doesn’t take itself too seriously with its style of gameplay. The combination of retro visuals and kick-ass rewards make this a pleasing choice for any slot enthusiast.